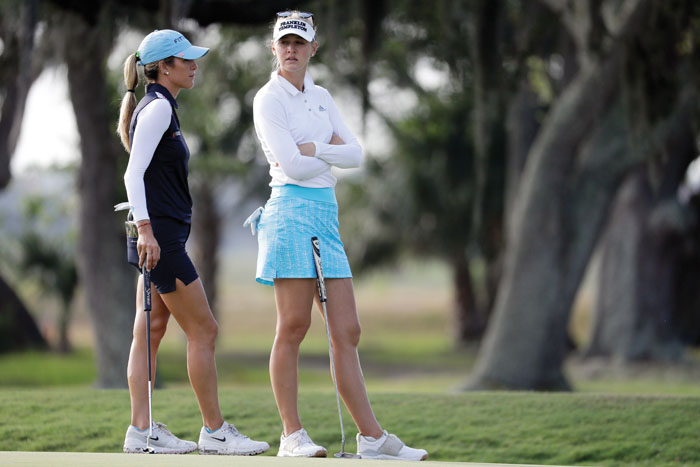 Jessica Korda, right, speaks with Jaye Marie Green on the 15th hole during the second round of the U.S. Women's Open golf tournament, Friday, May 31, 2019, in Charleston, S.C. (AP Photo/Steve Helber)

By PETE IACOBELLI AP Sports Writer
CHARLESTON, S.C. (AP) — Japan’s Mamiko Higa said she wasn’t nervous holding the first-round lead at the U.S. Women’s Open. Now, she’s given her nerves a much bigger test after Friday’s weather-delayed second round.
Higa shot an even-par 71 to maintain her edge in first appearance in the year’s second major. She rallied with three birdies on her final six holes to move in front of Jessica Korda and hold the halfway lead.
Higa, a 25-year-old known as part of a Japanese sports power couple with sumo wrestler husband Ikioi Shota, wasn’t worried after her opening surprise 65, the lowest debut round in tournament history.
“After I finished, (Thursday) night i didn’t feel that much pressure. I wasn’t nervous,” she said through an interpreter.
Higa showed those steely nerves after the rain delay of 1 hour, 58 minutes. Trailing Korda by a shot, she rolled in an 11-footer for birdie on her first stroke back.
She followed that up with two more birdies, both which moved her in front of Korda and into the lead after 36 holes at the Country Club of Charleston. On her final hole, the ninth, with darkness closing in, Higa confidently struck a 14-footer for birdie.
“I feel very lucky that I could finish up 18 holes today so that I can recover well for tomorrow,” she said.
There were 45 players still on the course when the horn sounded. They’ll return Saturday to finish before the third round starts. The tournament announced players will go off in threesomes to ensure getting the round in.
Korda shot a 68, her lowest score in 38 career rounds in the major tournament.
American amateur Gina Kim had a 72 to join Celine Boutier of France at 4 under. Boutier had four holes to play.
Lexi Thompson and Nelly Korda, Jessica’s younger sister, were among four players at 3 under. Thompson has two holes to play, and Nelly Korda three. Also at 3 under were American Jaye Marie Green and South Korea’s Jeongeun Lee6. Green shot a 68 and Lee6 — who adopted her unique name after the Korean LPGA dubbed her with it because five other players had registered with the same name — a 69.
Two-time U.S. Women’s Open champion Inbee Park was among a group of eight at 2 under after her second straight 70.
World No. 1 Jin Young Ko was at even par after a 70 while defending tournament champion Ariya Jutanugarn was a 2 over with two holes left.
Jessica Korda finished her bogey-free performance — just her fifth sub-70 showing in 38 career rounds of this major — well before thunderstorms caused a nearly two-hour weather delay.
Jessica Korda, playing in milder morning conditions, did not get her round going until making a birdie on the par-5 15th hole — she opened on the back nine — and followed that with another on the par-3 17th.
Her final birdie came on the par-5 fifth and came just short of the green in two, then chipped up within three feet to move to 5-under as she finished before Higa teed off.
Jessica Korda planned to be more aggressive on the par fives and accomplished that with birdies on two of the tree on Charleston’s par-71 layout. She left her approach on the final par-5, the ninth hole, about 40 feet away and settled for par.
Jessica Korda was happy with her approach to not get ahead of herself. “It’s a U.S. Open,” she said. “Patience is the name of the game.”
New professionals Jennifer Kupcho and Maria Fassi were both inside the projected cut line of 3 over with holes remaining. Kupcho, the Augusta National women’s amateur champion was at even par with three holes left. Fassi, the NCAA women’s individual champ, was 3 over with three holes remaining.
There was a massive lightning strike during the delay , hitting a large tree alongside the 18th fairway with a loud boom that sounded like an explosion that was heard throughout the clubhouse area where players, caddies and tournament staffers and volunteers took shelter.
“It was very scary. I’m glad everyone was okay,” said Emma Talley, who won the 2013 U.S. Women’s Amateur here and is competing this week. “I was scared it hit one of the tents, but I’m glad it hit the tree instead.”
The field will be cut to the top 60 scorers and ties after the second round is complete.
___
More AP sports: https://apnews.com/apf-sports and https://twitter.com/AP_Sports