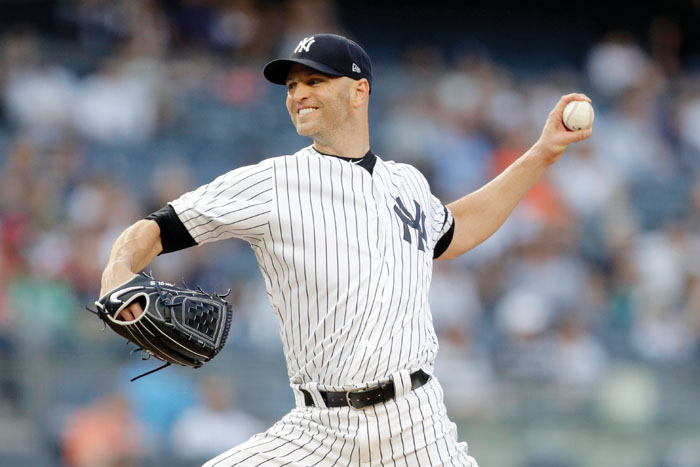 By MIKE FITZPATRICK AP Baseball Writer
NEW YORK (AP) — DJ LeMahieu homered and hit an RBI double off the wall against Chris Sale, sending the surging New York Yankees to a 4-1 victory over the Boston Red Sox on Friday night.
Aaron Hicks broke a third-inning tie with a two-run single, and J.A. Happ (5-3) pitched well against Boston again to win his fourth consecutive decision overall. New York got four shutout innings from its deep and dominant bullpen, handing the defending World Series champions their third loss in a row.
Despite a rash of injuries, the Yankees hold a 1½-game lead in the AL East over Tampa Bay — and a widening gap on the Red Sox. New York has won all three meetings between the longtime rivals this season, beating Sale (1-7) twice and outscoring Boston 17-4.
Rafael Devers homered early for the third-place Red Sox, who fell 8½ games back in the division. That’s the furthest they’ve been behind the Yankees since finishing the 2015 season nine games in the dust.
New York has won nine of 11 overall and is 31-10 since a 6-9 start.
Sale found his fastball after an April 16 loss at Yankee Stadium left him 0-4 in four starts. He allowed only 12 earned runs in his next seven outings and entered this one with a whopping 56 strikeouts in May.
But after the teams were rained out the previous night, Sale was touched up for four runs and seven hits in six innings Friday, pounding his fist into his glove in frustration after LeMahieu’s opposite-field homer cleared the right-center fence in the fifth. The left-hander struck out 10 for a sixth double-digit strikeout game in his past eight starts.
A pumped-up LeMahieu also doubled off the right-center wall in the third, driving in New York’s first run following singles by Gio Urshela and Brett Gardner.
The 30-year-old Sale, who signed a $160 million, six-year contract in March, leads the majors in losses. He came in with a 1.87 ERA in 18 regular-season games (15 starts) against the Yankees, the lowest mark against the team in the Live Ball Era for any pitcher with at least 100 innings versus New York.
Happ gave up one run and three hits in five innings, improving to 9-4 against Boston.
Adam Ottavino, Tommy Kahnle, Zack Britton and Aroldis Chapman each worked an inning to finish the five-hitter. Chapman struck out two in a perfect ninth for his 16th save.
TRAINER’S ROOM
Red Sox: RHP Nathan Eovaldi threw 22 pitches to teammates Brock Holt and Michael Chavis in a simulated game, the first hitters Eovaldi has faced since April 23 surgery to remove a loose body from his right elbow. His next step will be determined Saturday. … 1B Steve Pearce, the 2018 World Series MVP, was pulled in the second inning with back spasms and replaced by Chavis. … LHP Eduardo Rodríguez was available out of the bullpen after being rescheduled to start Tuesday in Kansas City. Prior to Thursday night’s rainout, Rodríguez (5-3, 5.04 ERA) was slated to start Friday. But the Red Sox pushed back Sale into that spot.
Yankees: CC Sabathia (right knee inflammation) is set to come off the injured list and start the series finale Sunday night against LHP David Price. … RHP Dellin Betances (right shoulder impingement) played long toss and said his arm felt good following Thursday’s bullpen. His third bullpen is scheduled for Sunday and if that goes well, the next step could be facing hitters. … Didi Gregorius (Tommy John surgery) went 0 for 5 and played all nine innings at shortstop in a rehab game with Triple-A Scranton/Wilkes-Barre. … OF Giancarlo Stanton, sidelined since March 31, is getting close to facing pitching and starting a rehab assignment, manager Aaron Boone said. … RF Aaron Judge (left oblique strain) worked out in the outfield again and is hitting off a tee. “Definitely has started the ramp up, but not hitting full bore in the cage yet,” Boone said. “But he’s letting it go a little bit and everything’s gone well with that.” Judge has been out since April 21.
UP NEXT
Red Sox: RHP Rick Porcello (4-4, 4.41 ERA) is 4-1 with a 2.94 ERA in his last eight starts, and Boston has won seven of them. The 2016 AL Cy Young Award winner, from nearby New Jersey, is 10-8 with a 3.11 ERA in 22 games versus the Yankees. He went 2-0 with a 2.31 ERA in four starts against them last year — and also won a playoff series clincher at Yankee Stadium.
Yankees: RHP Domingo Germán (9-1, 3.43) leads the majors in wins. He won six straight starts before getting tagged for a career-high seven runs and nine hits, including four homers, over five innings Sunday in a no-decision at Kansas City.
___