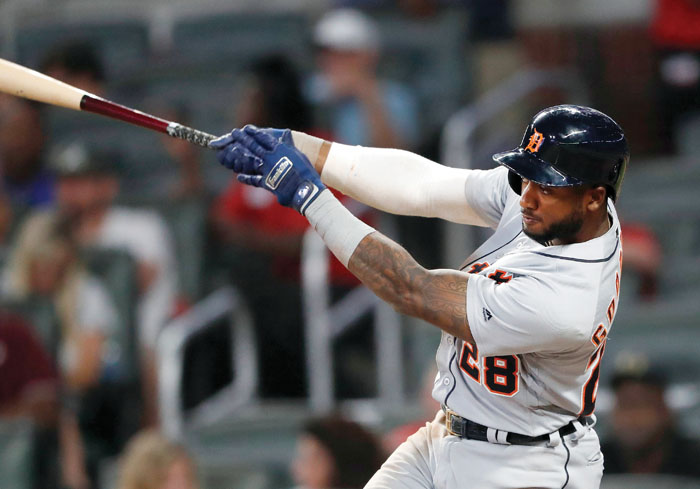 Detroit Tigers' Niko Goodrum connects on a solo-home run in the eighth inning of a baseball game Atlanta Braves, Friday, May 31, 2019, in Atlanta. It was Goodrum's second home run of the game. (AP Photo/John Bazemore)

By PAUL NEWBERRY AP Sports Writer
ATLANTA (AP) — Niko Goodrum was an unlikely offensive force.
To do it before the home folks made it even sweeter.
Coming into the night batting just .208, Goodrum homered twice and had a career-high five hits to lead the Detroit Tigers to an 8-2 rout of the Atlanta Braves on Friday.
Nicholas Castellanos and Grayson Greiner also went deep for the Tigers. Spencer Turnbull pitched into the seventh inning, allowing just five hits and one earned run in dealing the Braves their third straight loss at SunTrust Park.
But this night belonged to Goodrum, who had a large contingent cheering him on. He is a native of suburban Fayetteville, less than 40 miles south of the Braves’ stadium, and this was his first time playing in Atlanta.
“I haven’t played in front of the majority of them since high school,” Goodrum said. “To come out there and perform like that, I’m sure they had a good time. It’s pretty cool.”
How cool?
According to STATS, Goodrum was the first player to have five hits while playing for the first time in his home state since Ohio-born Pete Susko did so for the Washington Senators at Cleveland in 1934.
“Playing in front of your family is always good,” Goodrum said. “Some of us can’t do that because we don’t come to Atlanta a lot.”
Goodrum launched a 419-foot drive that nearly went into the Chop House restaurant above the right-field seats in the third inning. He hit another almost as far in the eighth for the second two-homer game of his career, the other coming against Cleveland on May 14, 2018.
A triple would’ve given him the cycle.
“I knew I had a home run, a double and a single,” he said with a chuckle. “I’ll take it.”
Goodrum finished 5 for 5 to raise his average to .230. He scored four times and also collected a run-scoring single in a three-run fifth that blew the game open.
Greiner homered in the second, and Castellanos added a two-run shot that capped a fifth that was sparked by JaCoby Jones’ leadoff triple. He got his left foot to the bag just ahead of Josh Donaldson’s tag on the knee — a call that was challenged by the Braves but upheld after a video review.
Buck Farmer came on in the seventh when the Braves loaded the bases against Turnbull (3-4) with no outs. Atlanta got a run on Brian McCann’s sacrifice fly and reloaded the bases when Ozzie Albies reached on an infield single that deflected off Farmer’s glove. But the Tigers reliever escaped the jam when pinch hitter Charlie Culberson grounded into an inning-ending double play.
After two straight strong starts, Atlanta’s Mike Foltynewicz (1-4) had another rough night. His slider was dominating at times — he struck out eight — but too many mistakes up in the zone doomed the right-hander.
That’s a familiar theme. Of the 31 runs Foltynewicz has given up this season, 19 have scored on homers.
“It was weird,” said Foltynewicz, who surrendered seven hits and five runs in five innings. “I thought I threw the ball pretty well, but the score says otherwise.”
Atlanta has been outscored 22-6 in its last two defeats.
MORE RARE TERRITORY
Goodrum was the first Detroit player to post at least five hits, four runs and three RBIs in a game since Carlos Pena on May 27, 2004.
DEFENSIVE LAPSES
The Braves had a rough inning defensively in the seventh.
Reliever Jerry Blevins made a terrible throw to first on an attempted pickoff, and Donaldson was charged with the second error of the inning when he failed to come up with a chopper down the third-base line.
The Tigers wound up scoring twice, including an unearned run, to push their lead to 7-1.
TRAINER’S ROOM
Tigers: 1B Miguel Cabrera left in the sixth inning with right knee soreness and was listed as day to day. He said the knee has been bothering him the last three games, but it swelled up against the Braves. “We’ll see how I’m feeling tomorrow and go from there,” Cabrera said.
Braves: OF Ender Inciarte isn’t close to returning to the active roster. “He hasn’t started his baseball stuff yet,” manager Brian Snitker said. “He needs to come in a few days in a row feeling pretty good, amp up his running and things like that before we see him swinging a bat.” Inciarte has been on the injured list since May 15 with a lumbar strain.
UP NEXT
Atlanta right-hander Mike Soroka (5-1) will look to continue his brilliant start to the season when he faces Detroit lefty Daniel Norris (2-3, 4.18 ERA) on Saturday afternoon. Soroka has yet to allow more than one earned run in any of his eight starts and comes in with a minuscule 1.07 ERA. He is just a few innings shy of qualifying for the lowest ERA in the majors.