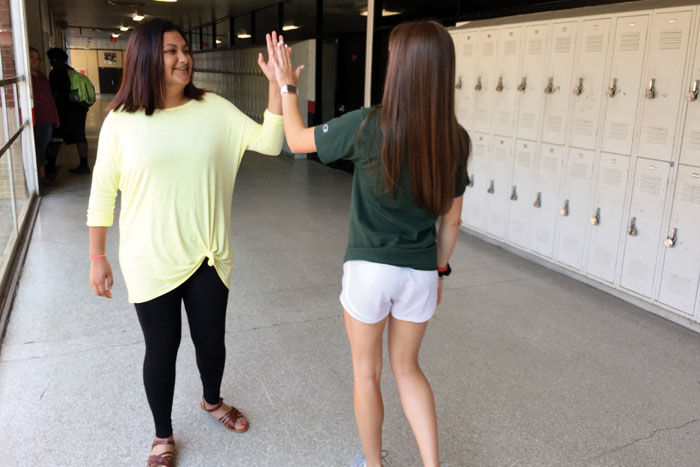 Andie Foley / Salisbury Post - Alicia Ramirez, a graduating senior from South Rowan High School, high fives a fellow student as she makes her way down the hall on Wednesday. This is a common occurrence wherever she wanders.

CHINA GROVE — Walk down the halls of South Rowan High School between now and June 7, and you’re sure to encounter Alicia Ramirez.

She won’t be hard to spot. As she walks, she gives off the air of local celebrity, with classmates and teachers alike moving to intersect her path and extending a hand for a passing high-five.

Through it all, a smile remains ever present on Ramirez’s face. Small but confident, it’s enough to communicate a message: South Rowan is more than just a school for her. It’s a passion.

As an incoming South Rowan freshman, Ramirez faced a bevy of potential obstacles along her academic journey. As an exceptional learner, she has unique academic and cognitive needs. She’s also bilingual.

The biggest challenge arose in November of Ramirez’s freshman year, when her mother committed suicide.

“Her mom’s passing and dealing with that grief has been a major part of her growing up in high school,” said Tew.

According to Principal Kelly Withers, Ramirez took the challenge of growing up and ran with it, immersing herself in the school experience. She’s explored art and animal science, broadcasting and Young Life. For two years, she served as soccer manager, and for three she was on the yearbook staff.

Why so much? “Because I have to show my mom I’m strong,” Ramirez said.

Withers summed her up with one word: resilient.

“She really teaches other people what resilience is, because one of her circumstances could break some of us,” said Withers, adding that even on a sad day, Ramirez is smiling.

Withers said Ramirez’s ability to articulate her feelings is an inspiration to her fellow students.

“For a lot of teenagers, they keep everything bottled up and inside,” she said. “For her to say that to people that she’s missing her mom … it makes it OK for somebody else to talk about what they’re going through.”

Ramirez holds biannual days of remembrance for her mom, once in November and once in May. She asks fellow students to wear purple — her mom’s favorite color.

More than that, Ramirez’s friendly disposition and kind heart have imparted yet another message. She’d inspired students to celebrate individualism, Withers said. As proof of her impact, Ramirez was voted this year’s homecoming queen by her peers.

She was crowned in front of many surprise guests, including South Rowan alumni and family members.

The experience, according to Ramirez, is one of her top two favorites of high school and represented another promise made and kept to her mother. The second was the chance to play soccer during this year’s senior night, she said.

Ramirez said she is headed for Rowan-Cabarrus Community College’s SOAR program. She hopes to make a passion for animals her career.

But Withers sees something more for her.

“My hope for her in the future is that she’s somewhere working with people,” she said. “Because she loves people and she will make them smile. … I could see her in a role working with the public and those who are in need of that joy.”

Rowan-Salisbury teachers to study in Mexico this summer