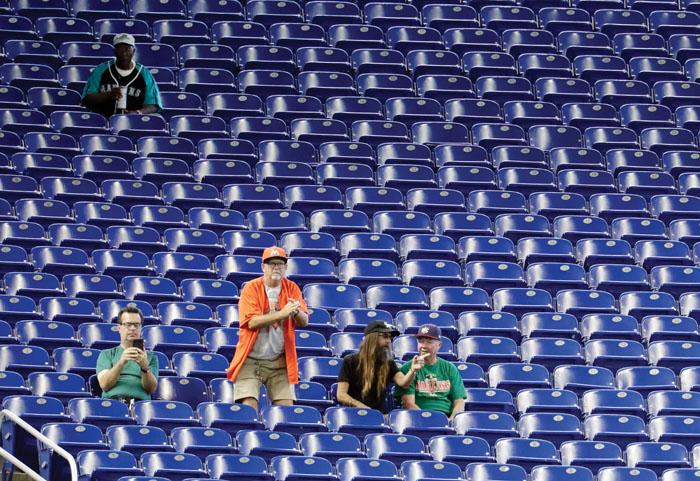 Fans watch a baseball game between the Miami Marlins and San Francisco Giants, Thursday, May 30, 2019, in Miami. Major League Baseball's average attendance of 26,854 is 1.4% below the 27,242 through the similar point last season, which wound below 30,000 for the first time since 2003. Baltimore, Cincinnati, Minnesota and Tampa Bay set stadium lows this year. Kansas City had its smallest home crowd since 2011, and Toronto and San Francisco since 2010. Miami and the Rays drew 12,653 Wednesday night _ combined. (AP Photo/Lynne Sladky)

Baltimore, Cincinnati, Minnesota and Tampa Bay set stadium lows this year. Kansas City had its smallest home crowd since 2011 and Toronto and San Francisco since 2010. The Marlins’ average attendance is less than Triple-A Las Vegas.

“Given the explosion of entertainment alternatives and the growth of the secondary market, it is not surprising that season ticket sales can be challenging,” he said. “The clubs are responding to this challenge with creative and effective approaches. For example, sales of subscription tickets are double what they were a year ago. And the Twins recently had a $5 flash sale that produced crowds of over 30,000 in three of four games, and the largest single-game attendance since 2016.”

“A lot of it comes down to competition. Fans want to know their teams are doing everything they can to compete for a championship every year,” union head Tony Clark said. “I see every empty seat as a missed opportunity. Experiencing a game and seeing players perform in person creates a bond with baseball; our industry needs to find ways to convert those empty seats into lifelong fans.”

MLB’s average peaked at 32,785 in 2007 — the last year before the Great Recession and the next-to-last season before the New York Yankees and Mets moved to smaller stadiums. The average was at 30,517 in 2015 before sliding for three straight years, and last season’s final figure of 28,830 marked a 4% drop, the overall number hurt by unusually cold and wet weather early in the season.

Manfred points to other metrics that please MLB: Games top prime-time cable ratings in 24 of 25 markets and MLB.tv streaming is up 8.5%. He views increases for the Phillies, Padres, Athletics and White Sox tied to team performance.

Florida remains a problem on both coasts.

Despite a sparkling, eight-season-old ballpark with a retractable roof, Miami is averaging 9,554 in Derek Jeter’s second season as chief executive — below the 9,582 average for Triple-A Las Vegas in its first season at a new 10,000-capacity stadium.

Tampa Bay plays in one of the most outmoded facilities in the major leagues and drew 5,786 against the Blue Jays on Tuesday, the smallest home crowd for the Rays, who started play at Tropicana Field in 1998.

“The more people there are, the more energy there’s going to be,” Tampa Bay outfielder Kevin Kiermaier said. “No matter what crowd you’re playing in front of, you have to get motivated.”

A quartet of last-place teams has seen swaths of empty seats.

Miami is on track to have the lowest home attendance in the National League for the seventh straight season. Tampa Bay is at the bottom of the AL for the fifth consecutive year.

“Any time you’re seeing less people show up to the ballpark, I think you’re wondering why and you’re wondering how you can change that,” said Miami first baseman Neil Walker, accustomed to big crowds from his time in New York. “You’ve got to assume that it has a little bit to do with it being expensive to come to the ballpark.”

Having traded many veterans, the Orioles are 28th in the majors at 16,263. Baltimore topped 2 million in 21 of its first 25 seasons at Camden Yards, exceeding 3 million nine times. But the Orioles drew 6,585 against Oakland on April 8, the lowest in the ballpark’s 28-season history except for a 2015 game closed to the public at a time when the city was plagued by rioting.

“I wish fans were here. When we played in Wrigley, the energy level was off the charts,” first-year Orioles manager Brandon Hyde said. “I’m hoping that someday soon that will be the case here.”

Cincinnati’s crowd of 7,799 against Milwaukee on April 1 was the lowest for a Reds’ home game since 1984 at Riverfront Stadium. That same day, Toronto drew 10,460 against the Orioles, the smallest attendance at the Rogers Centre since 2010.

Kansas City’s crowd of 10,024 against the Twins on April 2 was the lowest at Kauffman Stadium since 2011. Minnesota drew 11,465 against Toronto on April 17, the lowest figure in Target Field’s 10-season history.

The 19-year old pitcher from Florida has signed a six-year contract with the Fukuoka SoftBank Hawks of Japan’s Pacific League that will guarantee him as much as $7 million. Baseball fans are used to seeing Japanese players come to the major leagues and have great success. It hasn’t been attempted the other way around until now.

“The more I talked about it, the more it came to me that it was a great idea and I loved it,” Stewart said. “I do hope that I create a new opportunity for young amateur players to have a different path. I don’t know what is going to happen, but I hope one day someone says this was a great idea.”

The right-hander was selected eighth overall by the Atlanta Braves in last year’s draft from Eau Gallie High School in Melbourne, Florida, but negotiations were complicated by a wrist injury.

The Major League Baseball Players Association claimed the Braves failed to make Stewart an offer of at least 40 percent of the slot value for the pick, which would have made him a free agent, but they lost the grievance.

Stewart would have been eligible for next week’s amateur draft. He was 2-2 with a 1.70 ERA and 108 strikeouts in 74 1/3 innings this season at Eastern Florida State College.

“When the American system failed him, this system allowed a far better choice and opportunity,” said Scott Boras, who is Stewart’s agent. “This is the beginning of where Japan may be for American youth — the land of the rising arms.”

Stewart said conversations about pitching in Japan started at the beginning of the year when Fukuoka expressed interest. Team executives watched him pitch and talks began to ramp up in April. Once Stewart and his parents visited Japan to see the country and tour Fukuoka’s facilities, negotiations increased.

“It was a long process between getting back to baseball and making a decision. It came at an awkward time,” he said. “In the end, I made the decision that was best for me at the time. It came down to where I wanted to play baseball.”

Boras said Stewart’s signing provides another option besides heading back to school and re-entering the draft if a player wants to pursue a career.

“This process has opened a lot of eyes. Families are going to look at it and listen much differently because it wasn’t on the landscape before and now it is,” Boras said. “We’ll see a lot of different opportunities in Japan and Korea because those are established leagues. It’s a real development culture.

“I’m not saying our system is upside down because it develops a lot of successful pitchers. But their system adapts very well to collegiate and high school patterns.”

Stewart still could be positioned to cash in as a free agent much sooner than those who go through the draft. Players as young as 25 from foreign professional leagues can be eligible to be posted as free agents with no restrictions.

Stewart will be in Japan on Monday for a news conference. He will then report to the Hawks’ development complex once he obtains a Japanese work visa.

Even though this is the first time an American player is coming up through the Japanese minors, Mikasa said the Hawks have had success with international pitchers developing in their system, such as Cuba’s Livan Moinelo and Venezuela’s Robert Suarez.

“We look forward to this opportunity. We do have confidence in bringing up and developing players from all over the world,” Mikasa said through an interpreter.