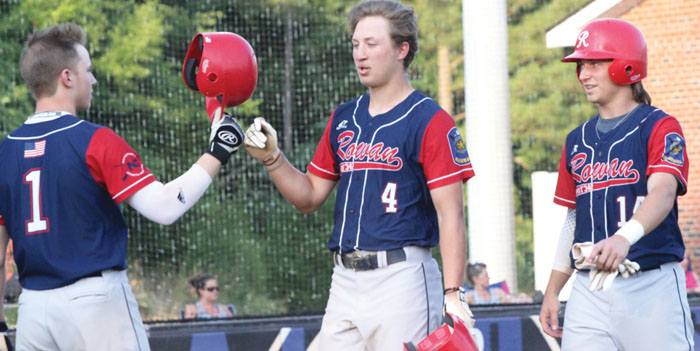 MISENHEIMER — When Wayne Mize blasted an early two-run homer, it looked like business as usual for Rowan County, but Stanly County rallied to win 6-4 at Ferebee Field on Thursday night in a game that won’t count in the division standings.

Rowan’s bats were strong at the outset against starter Zach Grice, but Stanly’s bullpen of AD McRae, Colby Lamm and Carson Lowder shut Rowan down after the third inning. Rowan went down 1-2-3 against McRae in the fourth inning as the momentum swung and 1-2-3 against Lowder in the seventh.

Rowan (8-3) took a 3-0 lead in the top of the first. Cole Hales walked in front of Mize’s second homer of the season. Hits by Bo Rusher and Daniel Durham tacked on another run.

Luke Barringer’s ground-rule double opened the third. He scored on Durham’s groundout to make it 4-0.

Rowan lefty Daniel Sell kept Stanly off the scoreboard the first three innings with the aid of a pickoff by catcher JT Fecteau when Stanly had runners at the corners with none out in the third.

Sell’s night was over after he walked the first two batters in the bottom of the fourth. Deacon Wike, a Carson hurler making his Legion debut, relieved Sell with two on and none out. Brady Parker’s single to center scored the first Stanly run of the night. Jordan Goodine threw another runner out at the plate to keep Rowan ahead 4-1.

Stanly’s five-run fifth proved decisive. Lowder’s run-scoring single made it 4-2. Cody Kidd’s two-run double off the wall was the key hit for the home team. That two-bagger tied the game at 4-all and put runners at second and third with none out. Stanly (7-2) got both of those runners home with groundouts by Colton Austin and Trent Wilson to take a 6-4 lead.

Lamm allowed a double to Jake Harris in the sixth but struck out the side.

Then Lowder got three outs on fly balls in the seventh to end it.

NOTES: After the homer, Mize lined out and singled in his other two at-bats. The game ended with him on deck. He has 26 RBIs. Goodine is second on the team with 11. … Rowan is back in action tonight at Mooresville before getting Saturday off. … Stanly has beaten High Point, Davidson County and Rowan in its last three contests. Stanly plays at Davidson County on Saturday. … Catawba football signee Lukas Scott led off and had three hits for Stanly. … Rowan slugger Chandler Lippard is still out with a hamstring injury.