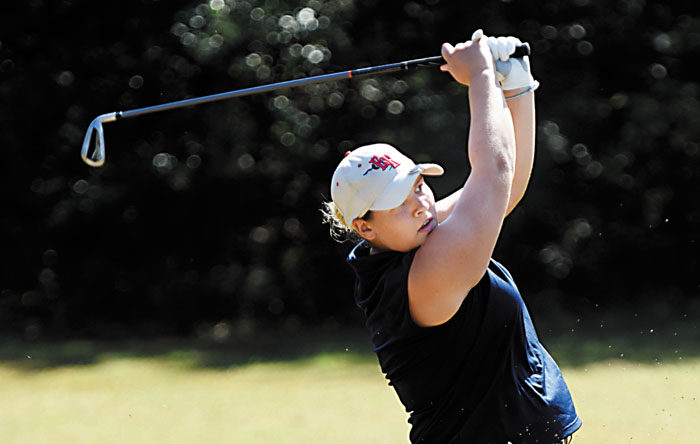 GRANITE QUARRY — Just because East Rowan’s Carmen Fraley was a little late to the party, it didn’t mean she had to be content with just sitting in the back of the room.

A softball and basketball player for most of her young life, Fraley started playing golf as a sophomore. By her junior year, Fraley was the county girls golf Player of the Year and then, repeated the feat as a senior.

Fraley’s high school success has earned her an opportunity to play golf in college. On May 9, she announced in front of friends and family at East’s media center that she is heading to Montreat, an NAIA Division II school in the mountains of North Carolina.

“Montreat had been interested all along,” said the quiet, but confident Fraley. “The coach there — John Sullivan — said he liked my work ethic and is looking forward to working with me.”

Rhett Teems, boys and girls golf coach at East Rowan, gets the credit for helping Fraley begin a career that she had not even considered at that point.

“I had Coach Teems as a teacher (world history) and he knew I played softball,” remembered Fraley. “He asked me to just come out for golf and try it. It went well enough that my dad and I went out and bought some clubs. My game just kept coming right along.”

Teems agreed with that assessment, after the country tournament on Oct. 4. “In three short years, she went from here to here,” Teems said that day, positioning his hands some three feet apart. “It happened almost overnight. In one year, she’s gone from winning the conference, being player of the year, winning the county player of the year to maintaining all that. Good thing is she doesn’t show emotion out there. You can’t be a head case on the golf course.”

Outside of the high school team, Fraley, like a lot of the county’s young golfers, sought out teaching professional Brian Lee at the Warrior Golf Club in China Grove.

She has been getting instruction with Lee for the last couple of years and plans to continue, “just to stay in the flow and try to improve before I leave for Montreat.”

Lee is proud of Fraley’s accomplishments, but believes the best is yet to come.

“Carmen’s strength is that she’s an athlete,” said Lee, who also works with UNC Greensboro’s Nick Lyerly and East Carolina’s Logan Shuping, among others. “She did multiple sports throughout high school and she has great hand-eye coordination. She really strikes the ball well, but we’re working on control, to guard against swinging too hard and to get her misses smaller, so she can recover from them better, which ultimately, leads to better scores.

“She has a great work ethic,” continued Lee. “Now that she’s focusing on just one sport, I really see her becoming a pretty good player with time, once she gets up to Montreat and is doing it on a daily basis. All evidence points to her being successful at this next level.”

Montreat had just an average year in 2018-19, placing in the top three in just a few of its matches. So Fraley has a chance to make an immediate impact when practice begins at Black Mountain Golf Club. She’ll join a team that has another student athlete from Rowan County — Adison Collins, a Carson graduate, will be a senior for the Cavaliers this fall.

“One strength I have is driving the ball, but during my senior season, I was much better at the short game,” said Fraley. “My putting and chipping had improved a lot. I worked on it so much and just got better. I think that’s what gave me an advantage in some of our high school tournaments.”

Fraley is goal-oriented and goes after those goals. She really wanted to repeat as Player of the Year and she did.

“The coaches helped me go after my goals,” she said, “but without my parents’ support in everything, I wouldn’t have gotten this far for sure.”

East Rowan won the county tournament at McCanless Golf Club last fall by 62 strokes over runner-up Carson (261-323), led by seniors Fraley and Camryn Corriher. The Mustangs went on to place third in the 3A Central Regional, making the state tournament as a team for first time. East finished 10th at the state event.

Fraley and Corriher actually tied with 84s at the county tournament, and both carded 82s at the regionals, played at Greensboro National. But Fraley performed better at the state tournament at Longleaf in Southern Pines, shooting 91 and 94, as well as having the lowest scores throughout the North Piedmont Conference season. Fraley was the NPC Player of the Year as well.

Montreat, where Fraley wants to major in physical therapy, took notice and her swing coach knows why.

“Golf has become an athletic sport, so when you get athletes to have that commitment to getting better, which she appears to have, her best golf is definitely in front of her, not behind her,” offered Lee. “There’s no doubt in my mind. She’s going to be playing harder courses at the college level, but with her determination, I see no reason why she won’t be a contributor at Montreat for the next four years. The sky’s the limit.

“The work ethic, determination and passion are there, and obviously, the athletic ability is there,” continued Lee. “That’s a great combination, so once all of that is working in concert with one another, there’s no reason why she can’t play some real good golf.”

Obviously, Fraley is happy that Coach Teems mentioned golf to her that fateful day in world history.

“Absolutely,” she said. “My love for basketball and softball shifted to golf, for sure, since that day. From the start, a goal was to play golf in college and now, I have that chance. I just have to make the most of it, and I can’t wait to get started.”