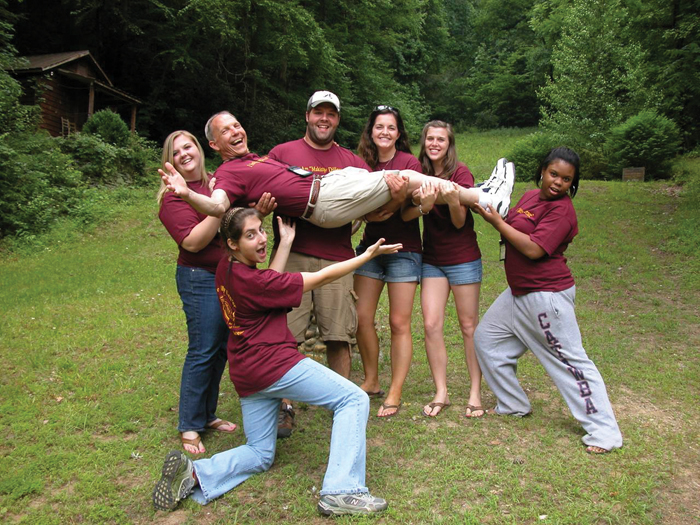 SALISBURY — When educators at Catawba College say they educate “the whole student,” it means much more than a couple of words flashing on your screen or printed on a piece of paper.

Catawba College, particularly the Lilly Center for Vocation and Values, not only wants its students to learn and grow during their years at Catawba but also to figure out what is important to them in life as they close the books and head out to face the world.

Enter Ken Clapp, senior vice president of the college, college chaplain and assistant professor of religion. He is also director of the Lilly Center. During the school year, Clapp conducts vocational mini-retreats focusing on what is important to a student. The retreats grew out of collaboration with Kurt Corriher, a retired professor who has served as facilitator for several of retreats. Clapp calls them Life Journey Retreats “a deep dive into vocation and values.”

In June and August, the Lilly Center also holds two-day retreats at Black Lake Retreat Center in Asheboro for its freshman class. Students reflect on what they feel that their vocational calling may be, as well get an introduction to college life.

At Clapp’s recent retreat, he invited students to think about their “one life.” He said: “You only have one life — so what exactly do you plan to do with what the poet Mary Oliver refers to as ‘Your one wild and precious life?’”

From its inception at Catawba 15 years ago, the Lilly Center has focused on helping students discover the place to which God calls them: the place where deep gladness and the world’s deep hunger meet, said Clapp, quoting from Frederick Buechner, a Presbyterian theologian, poet and novelist.

The goal, Clapp said, is to find that place of gladness, joy and meaning in your life.

“It’s not about how much money can I make,” he said, citing studies that show no correlation between money and happiness. The average household of four needs between $60,000 and $70,000 per year. “After that, having more money doesn’t do that much to contributing to happiness.”

But, he added, happiness does lead to success. “We are successful because we are happy,” he said.

The word “vocation” in Latin means “to be called out … called to do something with our lives,” he said, talking about people in their 30s, 40s and 50s who tell him: “I really wish that I had chosen differently.”

“And I ask, ‘Why didn’t you?’ They talk about parents, a good friend, or someone important to them who had expectations for them. They allowed others’ expectations to cause them to do something that they weren’t passionate about. I ask them if the person no longer has that influence, would that change what you would do vocationally?”said Clapp.

He suggested that students “stop networking and start ‘relationshipping.’ Take networking a step further and develop relationships with people who care about you … who want you to travel on the good road for you. A deeper life comes out of conversations.”

The keys are knowing who you are, understanding your values, and knowing the gifts that God has given you.

Clapp asked students to think about the three things that they felt they must accomplish in the next three months. Then he asked for a second list: “Suppose the doctor has told you that you have six months to live. What would be on that second list of the three most important things in your life?

“If the lists are not the same,” he said, “think about what the second list suggests about what you consider important. That gives you a window of where you see your values. This is a clue to what you want to do vocationally.”

He then moved on into his deep dive into life. “What accomplishment in the past six months are you most proud?” When was the last time that you did something just for somebody else and how did that make you feel?”

Thirdly, he asked students to think about what they would you if they did not have to answer to money constraints. “Throw off your inhibitions,” he said. “What would you do?”

Clapp encouraged students “to look for their passions. Find the vocation that allows you to express your passion and you will find joy and meaning in life.”