Woods closer to Snead than Nicklaus as Memorial begins 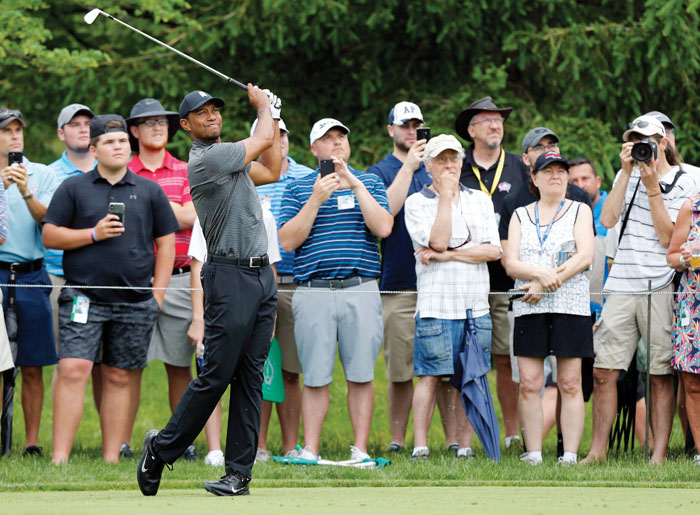 Tiger Woods plays in the pro-am round of the Memorial golf tournament Wednesday, May 29, 2019, in Dublin, Ohio. (AP Photo/Jay LaPrete)

DUBLIN, Ohio (AP) — Winning the Masters gave Tiger Woods his 15th major and allowed him to resume the pursuit of Jack Nicklaus and his 18 majors.

It moved him even closer to another record that Rory McIlroy believes should get more attention.

Woods now is at 81 career victories on the PGA Tour, one short of the official record — as official as the tour can determine — that Sam Snead set from 1936 to 1965.

“Especially this day and age, I think it’s more impressive than his major tally,” McIlroy said Wednesday ahead of the Memorial. “Eighty-two wins … if you’re around for 20 years, that’s four a year, every year. It’s very, very impressive. I think if you’re winning multiple times a year, you’re doing pretty well. So to have the average that he’s had — eight-win seasons, nine-win seasons — if he does pass that record of Snead’s … it’s almost more impressive than the 15.”

Woods is a five-time winner at the Memorial, and the most recent victory at Muirfield Village (2012) was significant because it was his 73rd title on the PGA Tour, which tied him with Nicklaus for second on the career list.

What to expect from him this year remains a mystery.

He looked like the Woods of old when he won at Augusta National by hitting all the right shots and letting everyone around him make the mistakes. A month later, without having played since the Masters, he missed the cut at Bethpage Black in the PGA Championship.

Woods attributed his lack of play to the emotional toll of winning the Masters — it had been 11 years since his last major — and to being sick during the three days of practice rounds at Bethpage Black, which limited him to nine holes.

He rarely misses the Memorial except for injury or the death of his father in 2006, and Woods wants to start getting his game in gear with the U.S. Open at Pebble Beach just two weeks away.

He played the pro-am Wednesday with retired NFL great Peyton Manning, who knows about returning from injury to win the big one.

“I think the most impressive thing is how he’s been able to adjust and be adapted to playing in a new physical state,” said Manning, who returned from a neck injury to win a Super Bowl with the Denver Broncos. “That’s kind of what I did. To use a baseball analogy, I couldn’t throw the 100 mph fastball anymore, but you could still work the outside edges of the plate. You could still strike a guy out that way. He struck a lot of guys out. He came home with the win.”

The fastball in golf is power, and that never hurts around Muirfield Village, especially in a week when the course is expected to be softened by storms.

Woods said he feels refreshed after the PGA Championship and now needs to get in competitive rounds in his final start before the U.S. Open. He was at Pebble Beach last week for a day of practice in damp conditions, having not seen the course since 2012 in the AT&T Pebble Beach Pro-Am, where he closed with a 75 to tie for 15th.

Woods had had 10 seasons of five victories or more — only Vijay Singh and Nick Price have had more than five wins in any season over the last 25 years. Woods had 79 victories in 18 years and then was slowed by back surgeries to the point where he nearly didn’t return at all.

“To get into those numbers, it takes longevity and hot years,” Woods said. “I think you need multiple winning seasons. You need to do that for decades. That’s something I’m proud of. That’s not something that happens overnight. To be able to come this close to get to one behind Sam Snead has been pretty amazing.”

Snead compiled his victories before the modern PGA Tour began in 1970, when the schedule was unwieldy and there was not always agreement on what should constitute an official victory. His tally includes five team events, an 18-hole event and one year at Pebble Beach when it was a four-way tie with no playoff.

Snead long believed his total should have been 89 before the PGA Tour took some away during a research project by a nine-person panel.

Whatever the case, the PGA Tour lists the record at 82. Woods is at 81.

“I don’t know how you add up tournaments anymore,” Nicklaus said. “No one in the world could know how many tournaments Sam Snead won. … Tiger is the winningest, probably, player there ever was. And he’s probably won a higher percentage of tournaments than anybody that ever played. Of course, I’ve always measure my life differently. I never measured it on tour wins. I measured it on major wins.”

That’s the number that hasn’t changed since Nicklaus won his 18th professional major at the Masters in 1986.

FAYETTEVILLE, Ark. (AP) — Stanford wanted to be among the eight teams that qualified for match play in the NCAA Championship, knowing anything could happen from there.

It led to an NCAA title, and a perfect ending to the college careers of Brandon Wu and Isaiah Salinda.

Wu and Salinda capped off 3-0 records in match play, and Henry Shrimp delivered the winning point Wednesday as Stanford beat Texas 3-2 to claim its ninth NCAA title and first since 2007.

“It’s crazy,” Wu said. “You can’t script a better ending to your career. This whole week, we knew that every round could be our last, so to end on a high note is great.”

Because of storms in the forecast, the championship match was moved up to the morning. Stanford finished off a 3-2 victory over Wake Forest early Tuesday, and then squeaked by Vanderbilt in the afternoon. After a quick turnaround, Stanford had the upper hand on the Longhorns, especially on the back nine at Blessings Golf Club.

Shrimp fell 2 down early in the lead match to Spencer Soosman before tying the match on No. 8. He took his first lead on the 11th hole and never trailed the rest of the way in a 2-and-1 victory that sealed it for Stanford.

Texas won the other two matches behind Parker Coody and Steven Chervony.

“The first goal was to make match play,” Salinda said. “Once we made match play, I thought we could win it. It’s pretty cool. It means a lot to end our careers like that. This is the best way to end our four years here.”

It was Chervony who gave Texas a chance. He won in 19 holes in the decisive match Tuesday evening to beat Oklahoma State, which had the No. 1 seed by leading 72 holes of stroke play by 31 shots.

In the quarterfinals, Texas won the last match on the 18th hole to beat Oklahoma.

“We were ready to play today,” Texas coach Jon Fields said. “We just got beat by a really good golf team. That’s all there is to it. It will fire us up for next year.”

Stanford last won the NCAA title in 2007, two years before the format switched to match play.