Hard-hitting Twins are talk of baseball 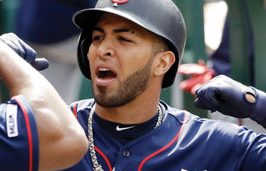 Eddie Rosario was key in the Braves' victory Saturday night that put them in the World Series. (AP File Photo/Marcio Jose Sanchez)

MINNEAPOLIS (AP) — The signs of a potent lineup were evident with the Minnesota Twins in spring training, factoring in the addition of a few accomplished power hitters and the anticipation of further development by their homegrown players.

Even the most optimistic member of the organization would’ve had trouble envisioning a start like this, though. One-third of the way through the season, the Twins have been hitting like the famed 1927 New York Yankees. Well, better than that, actually.

The Twins (37-17) lead the major leagues in several hitting categories, the most obvious reason they have the best record in the major leagues. Their 106 home runs are the most, fueling a .515 team slugging percentage that, if sustained, would be the best in big league history. Those ‘27 Yankees slugged at .488, a clip that stood until the Boston Red Sox finished at .491 in 2003 .

“Everybody’s happy when you’re hitting a lot of bombas,” left fielder Eddie Rosario said as he switched from English to Spanish with a sly smile.

Rosario, who leads the Twins with 39 runs, 17 homers and 47 RBIs, is one of six Latino regulars in the lineup, and the Twins have already been touting on social media the “Bomba Squad “ as the official hashtag-based nickname. Other catchy options like “’Sota Pop,” ‘’The HR Department,” and “New Power Generation,” in tribute to Minnesota music icon Prince, have been bandied about.

Given the messaging from rookie manager Rocco Baldelli, though, these Twins don’t appear to be at risk for getting caught up in the accolades or the gimmicks.

“It’s a good start to a long season, but I think all of us in here are just trying to stay in the present, work on our day-to-day tasks, and not get too ahead of ourselves,” said right fielder Max Kepler, who along with Rosario, center fielder Byron Buxton, and third baseman Miguel Sanó debuted with Minnesota at various points during the 2015 season. Shortstop Jorge Polanco, another product of the Twins farm system, beat them to the majors by a year but didn’t become a regular until 2017.

With the arrival this year of first baseman C.J. Cron, designated hitter Nelson Cruz, second baseman Jonathan Schoop and multi-positional player Marwin Gonzalez, all of whom topped the 20-homer mark within the previous two seasons, the Twins clearly were going to field at least a deep, versatile lineup. They’ve displayed much more than that, tallying eight-plus runs in 16 different games and reaching double digits six times.

Even the catchers, Jason Castro, Mitch Garver and Willians Astudillo, have been difficult outs. Their combined .901 on-base-plus-slugging percentage is a collective second best in the majors at the position , behind the Chicago Cubs (.976).

With 55 home runs in May and two games left in the month, starting Thursday with at Tampa Bay in the opener of a 10-game trip, the Twins have set their team record for homers in one month. They’ve got eight players on pace to finish with at least 20 home runs. They’re on their way, along with four other teams in this especially power-packed season in baseball , to break the season record of 267 homers set just last year by the Yankees.

What’s remarkable about the Minnesota method is the lack of whiffs. The Twins have struck out 410 times, the third-fewest in the majors. They’ve assembled a bunch of aggressive hitters seeking to drive the ball where they can as soon as the first pitch.

From Baldelli to hitting coach James Rowson to assistant hitting coach Rudy Hernández, the Twins have also encouraged their hitters to adopt an approach — both before and during the game — that they’re comfortable with rather than conforming to an organizational standard. That’s often music to a millennial’s ears. Baldelli has also fostered an encouragement of players to rest at appropriate points on the schedule, like

“The more relaxed you are, in theory, the more comfortable you play,” Baldelli said. “We want the lowest-stress environment possible, so that when our players show up to the field, they just worry about going out there, having a good time, and playing as best they can.”

That philosophy has been working so far. The defense has been sound and the pitching has been somewhere between reliable and superb, with rookie Devin Smeltzer’s six shutout innings of the Milwaukee Brewers on Tuesday the latest example of the latter.

With 108 games remaining, if they played at merely a .500 winning percentage the rest of the way, the Twins would still reach 91 wins.

“I know what the last few years felt like when we were the ones not in this position,” Buxton said, “so to be in this position with the focus and the mindset and the determination and the dedication or whatever you want to classify it as, that’s the top of the list right now.”