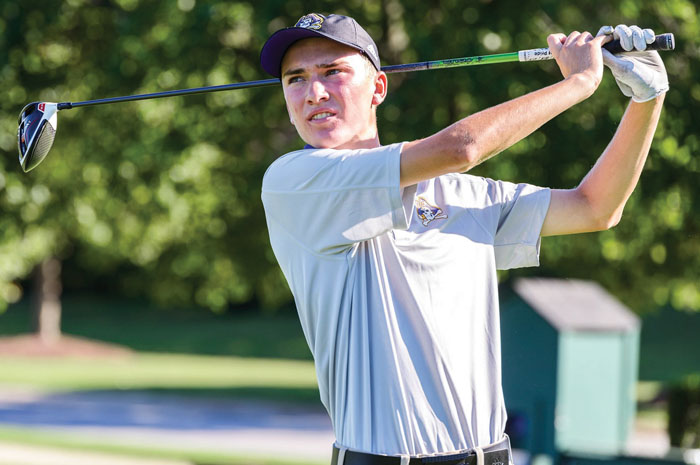 BANDON, Oregon — Scott Harvey and Todd Mitchell, 40-year-olds who have claimed more than their share of big tournaments, won the U.S. Amateur Four-Ball Championship on Wednesday, but runners-up Logan Shuping and Blake Taylor, college students at East Carolina, were an amazing story.

The odds against Shuping and Taylor advancing through a stroke-play field of 128 were reasonably long, but they easily managed that. Seeded 17th among the 32 teams that reached match play, they calmly won match after match. They eliminated four teams of elite, seasoned opponents before finally losing to Harvey and Mitchell, 2-up.

In the championship match, Shuping, an East Rowan graduate, and Taylor lost holes 5 and 6 to go two down, but they won on 7, 10 and 13 to briefly go 1-up.

Harvey, the 2014 U.S. Mid-Amateur champion, is from Kernersville, and is a legend in the state’s amateur circles. Mitchell, the 2008 Mid-Amateur runner-up from Bloomington, Ill., played minor league baseball before deciding to focus on golf and the insurance business and has enjoyed quite a career.

Shuping and Taylor, who is from a small town near Wilmington, are both 21 and rising seniors. In Tuesday’s quarterfinal match they ousted Bobby Leopold, of Coventry, R.I., and his brother-in-law Tyler Cooke, of Warwick, who had been on a roll.  Shuping and Taylor posted a 2-up victory that was highlighted by Shuping hitting his approach shot 6 inches from the pin on No. 18 to clinch the match.

In the semifinals on Wednesday morning, Shuping and Taylor never trailed and won 2-up against Andrew Medley and Taylor Wood. They led 1-up going to 18 and closed the match with a birdie.

Taylor has been an all-conference golfer for East Carolina. Shuping has struggled to consistently crack the Pirates’ top five, but his performance in this event, playing on the last day of a national tournament, should do a world of good for his confidence going forward.

“It was beyond an amazing week here,” Shuping said. “Obviously, you know, we’d like to be holding the trophy. Any time you lose, you’re not going to be that happy.  But looking back on it, this is probably going to be my favorite week of golf ever. I mean, this is so much fun, having the family here, playing with Blake. We played so well. I mean, we even played well this afternoon. Those guys got hot, and they’re great. That’s what happens.”