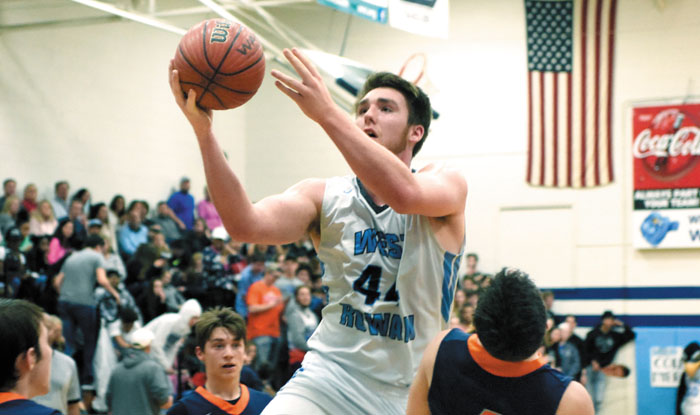 Wayne Hinshaw file /for the Salisbury Post ... In a file photo from Feb. 6, 2018, West Rowan’s Caleb Mauldin (44) goes to the basket in a game against Carson. After a year at Fork Union Military, Mauldin has announced that he will continue his education and basketball career at the University of North Georgia.

SALISBURY —  Former West Rowan basketball star Caleb Mauldin has no doubt that a year at Fork Union Military Academy changed his life for the better.

“It was tough at first, and I had to make a transition to getting up at 6 a.m., marching, eating meals on a schedule, having a very structured day, and then practicing basketball at the end of it,” Mauldin said. “But I’d do it again. I  wouldn’t be where I am now without Fork Union.”

The 6-foot-8 Mauldin signed recently with the University of North Georgia in Dahlonega.

North Georgia is Division II, but it’s about as good as it gets in D-II. North Georgia plays in the Peach Belt Conference, a league where basketball is undisputed king. Games are played in arenas and field houses rather than gyms. North Georgia has one of the shinier facilities in D-II in its 3,600-seat, $40 million Convocation Center. That facility opened in 2018.

“It’s definitely a basketball-centric conference and I believe the Peach Belt is the highest level of Division II basketball,” said Dan Evans, North Georgia’s new head coach. “We also believe Caleb will do the work it takes to succeed at this level.”

Mauldin had offers coming out of high school, including one from Catawba, a good D-II program in his hometown, but he opted for a post-graduate year at Fork Union, waiting to see what opportunities came his way.

As it turns out, he’ll still be competing at the D-II level, but after a year at Fork Union, facing good big men and battling tough competition every week, he’s far more prepared for the college grind than he would’ve been a year ago.

“I played against a Tennessee commit, a VCU commit, a Virginia Tech commit, a lot of great players,” Mauldin said. “That extra year before college is really going to help me. My body developed a lot.  I’m leaner and stronger.”

Mauldin weighed close to 260 pounds when he reported to Fork Union. Now he checks in at a well-conditioned 235.

His strides off the court were just as meaningful as the ones he made on it.

“I moved up in the ranks to lieutenant and was in charge of my hallway,” Mauldin said. “I came a long way.”

Mauldin will have four years of eligibility at North Georgia.

When Evans was hired by North Georgia in April, after a successful coaching stint at D-II Ohio Dominican in Columbus, he began looking for recruits to help improve a team that was 11-17 overall last season and struggled to a 6-16 mark in the Peach Belt — which includes schools such as Augusta (where West Rowan’s Keshun Sherrill starred), USC Aiken, Francis Marion and UNC Pembroke.

Mauldin’s father, Clint, played on the 1997 West Rowan team that won the 2A state championship. One of his West teammates, Mark Vanderslice, is now the head coach at USC Aiken.

Adam Blake was hired as a North Georgia assistant coach in May. He’d been an assistant at Concord University in West Virginia and was familiar with Mauldin. He recommended him to Evans.

“We brought Caleb in for a visit, and he appears to be a perfect fit for our program and what we’re trying to build,” Evans said. “He not only has size and the ability to score, he sees the floor well. He understands his strengths and his weaknesses. He understands angles and he has a good feel for using his body and his physicality. And as a guy with a year of military school, he has a level of discipline that the average freshman doesn’t have.”

Mauldin has soft hands and nimble feet. He’s not exceptionally fast or explosive, but as Evans said, he understands what he can and can’t do.

It’s taken some time, but he’s found a school where he wants to be. He should be good for the Nighthawks.

“North Georgia’s facilities are amazing, and the coaches and players I met have been great,” Mauldin said. “I’ll fit right in.”