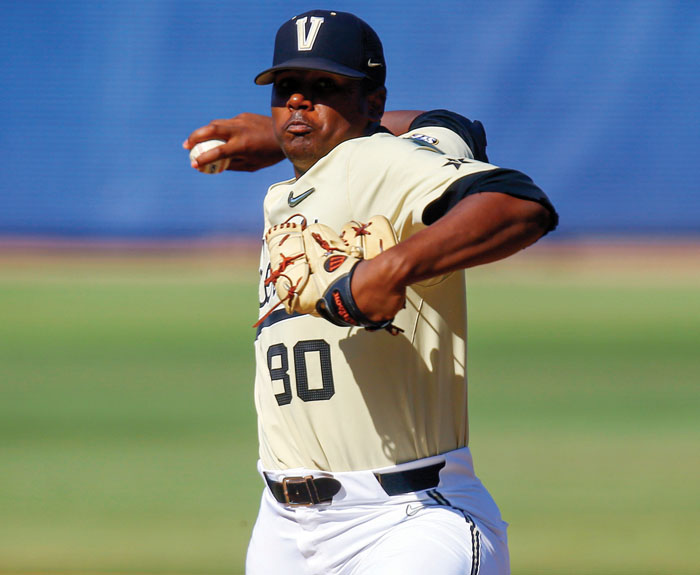 Vanderbilt pitcher Kumar Rocker throws a pitch against LSU during the first inning of an NCAA college baseball game at the Southeastern Conference tournament, Saturday, May 25, 2019, in Hoover, Ala. (AP Photo/Butch Dill)

NASHVILLE, Tenn. (AP) — When Vanderbilt pitcher Kumar Rocker takes the mound with his 6-foot-4 and 255-pound frame, the imposing freshman looms so large that it feels like Rocker’s almost halfway to the plate when he releases his 98-mph fastball.

Baseball is not the wrong sport, it’s just not part of the Rocker family sports legacy.

Kumar played defensive end in high school before turning his focus solely to baseball. His father, Tracy, was the first Southeastern Conference player to win both the Lombardi Award and Outland Trophy at Auburn before four seasons in the NFL. Uncle David was a defensive tackle for the Los Angeles Rams in the early 1990s.

“I think my chances are higher rather than walking up to 6-6, 300-pound linemen,” Rocker said.

That doesn’t mean the decision was easy for the teenager, whose mother chose his first name to honor her Indian roots and as a reminder that he comes from two cultures. Lalitha Rocker said her son kept his high school football helmet on the night stand for months until he had to return it. But Kumar was the youngster told to stop throwing rocks because he always hit his targets, and both parents noticed how different Kumar became on the mound — even as early as travel ball and Little League.

“He had a calmness about him,” Tracy said. “He didn’t react to anything. He just pitched. He did it again, and my wife kept saying, ‘He’s going to be a pitcher.’ … I’m like, ‘No, he’s going to be a football player because everybody’s played football.’”

Traipsing with his father through football locker rooms also made it seem like Rocker would follow the family football tradition. Then he started throwing in the high 80s the summer of his first year in high school. Rocker played football through his sophomore season just as the game started being fun for him.

“That’s when my offers started coming in a little bit. I started to get noticed,” Rocker said, adding he was called “’Coach Rock’s kid’ a lot because of my name. And then I think my dad and mom saw what baseball had in store for me, and they were fine with that. My mom enjoyed driving me to the tournaments around the summer and all that.”

Even his arrival at Vanderbilt came with another decision that wound up not much of an issue.

The second-highest rated right-hande r coming out of high school by MLB.com, Rocker was seen as a possible top 10 pick. His unwavering commitment to Vanderbilt is why he finally was drafted in the 38th round by Colorado. The importance of college had been driven home by both his father and his mother, whose parents valued education after emigrating from India to Maryland in 1965.

Baseball also is the sport that gives players two chances at being drafted: The first coming out of high school and the second after the third year of college.

“It’s a no brainer for me,” Lalitha Rocker said. “At the end of the day, it was his decision. I’m happy he went to school.”

His father currently coaches the defensive line at Tennessee and also has been an assistant at his alma mater Auburn, Arkansas, Mississippi and Georgia. Coach Tim Corbin lured Rocker to Vanderbilt with his history of producing MLB pitchers like David Price and Sonny Gray and the Commodores’ winning tradition, including the 2014 national title.

The Commodores (49-10) currently lead the nation in wins after winning both the Southeastern Conference regular season and tournament titles. They also are the No. 2 seed overall going into the NCAA Tournament.

Lalitha said they looked at education, the pitching staff and how the players conducted themselves as well as their camaraderie.

“It was amazing to me,” she said. “OK is that real? It actually is real because after having a year under my child’s belt he’s improved. He opens doors, he carries packages. It’s amazing. He’s an already incredible kid, and now it’s just the next level. We made the right decision.”

The 19-year-old Rocker is 8-5 with a 4.14 ERA and is third on the team with 71 2/3 innings pitched. Corbin moved him from starting the third game of each SEC series to the second in mid-April, and Rocker has won six of his last seven starts.

Corbin said Rocker adapted well to being thrown in early as a starter. Rocker’s pitches include that fastball, and he has added a change-up pitch around 85 mph since arriving at Vandy. Corbin said Rocker is like a sponge learning all he can.

And once the freshman makes a decision, he’s good, saying — “I don’t second-guess myself.”

That is working out well for Vanderbilt.