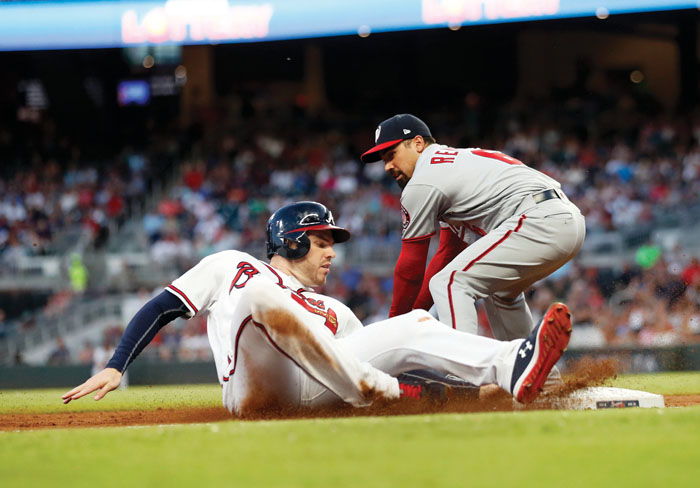 Atlanta Braves' Freddie Freeman (5) advances to third base on a Josh Donaldson base hit as Washington Nationals third baseman Anthony Rendon (6) handles the late throw in the fourth inning of a baseball game, Tuesday, May 28, 2019, in Atlanta. (AP Photo/John Bazemore)

By CHARLES ODUM AP Sports Writer
ATLANTA (AP) — Stephen Strasburg matched his season high with 11 strikeouts in seven innings and the Washington Nationals took the lead on three straight walks to beat the Atlanta Braves 5-4 on Tuesday night.
Howie Kendrick had three hits, including his ninth homer, and scored two runs for Washington. Trea Turner also had three hits.
Braves rookie Austin Riley’s two-run homer off Kyle Barraclough in the eighth cut Washington’s lead to 5-4. Riley had three hits. His sixth homer in his 13th game cleared the center field wall.
Sean Doolittle protected the one-run lead in the ninth for his 10th save in 12 chances. Dansby Swanson singled with two outs before Doolittle struck out Freddie Freeman.
Strasburg (5-3) gave up an RBI single to Nick Markakis in Atlanta’s two-run fourth but otherwise faced no trouble. He struck out two Atlanta batters in each of the first three innings and gave up only five hits and two runs.
Atlanta led 2-1 through five innings before back-to-back doubles by Kendrick and Kurt Suzuki to open the sixth tied the game.
Max Fried (7-3) hit Victor Robles with a pitch and issued two walks in Washington’s three-run sixth. Fried, who gave up four runs in 5 1/3 innings, left the game after walking Adam Eaton with the bases loaded, giving the Nationals a 3-2 lead.
Anthony Swarzak, making his Atlanta debut after he was acquired from Seattle on May 20, walked Anthony Rendon to force in another run.
Juan Soto led off the fourth with a single up the middle for a 12-game hitting streak. Soto advanced to second on Suzuki’s single and scored on a two-out single by Robles.
Fried’s pickoff move produced two outs. Fried threw to second to pick off Turner in the first. After Eaton was grazed by a pitch from Fried in the fifth, the left-hander’s pickoff to first fooled Eaton, who reacted too late.
TRAINER’S ROOM
Nationals: RHP Aníbal Sánchez is expected to come off the 10-day injured list to start Wednesday night. Sánchez is returning from a left hamstring injury. He has had no setbacks. Manager Dave Martinez said he wanted a final update on Sánchez on Tuesday night before officially announcing plans for the second game of the series.
Braves: There is no word on when OF Ender Inciarte will start baseball activities in his rehab from a lumbar strain. Inciarte was placed on the 10-day IL on May 15 and has missed 13 games.
UP NEXT
Nationals: Sánchez (0-6, 5.10) is expected to look for his first win in his 10th start of the season. He is 5-11 with a 4.99 ERA in 18 career starts against the Braves.
Braves: LHP Kevin Gausman (2-3, 4.33) is 4-1 with a 4.41 ERA in six career starts against Washington.
___
More AP MLB: https://apnews.com/MLB and https://twitter.com/AP_Sports