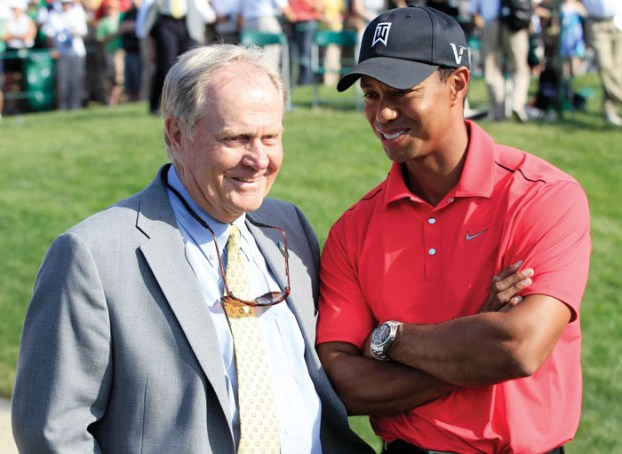 FILE - In this June 3, 2012, file photo, Jack Nicklaus, left, talks with Tiger Woods after Woods won the Memorial golf tournament at the Muirfield Village Golf Club in Dublin, Ohio. Winning his 15th major has renewed the conversation of whether he can catch the record held by Nicklaus. (AP Photo/Tony Dejak, File)

DUBLIN, Ohio (AP) — Jack Nicklaus and Tiger Woods had their first conversation about rivalries while in South Africa for the Presidents Cup in 2003, right around the time Woods was about to get his fourth rival in Vijay Singh.

The message Nicklaus preached from experience that day: Make sure you’re part of the conversation.

Woods is the Masters champion.

And that makes Nicklaus part of the conversation again.

All it took was one major — especially because Woods had gone 11 years and five surgeries since his last one — to consider the possibility of Woods reaching the Nicklaus standard of 18 professional majors.

For so many years, Nicklaus was asked more about whether Woods could break his record than about the golf ball.

And then the injuries piled up, and the questions stopped.

Nicklaus smiled, because he doesn’t mind talking about it. He’s part of the conversation again, even though it has been 19 years since he played all four majors.

He spoke about winning his final major in the 1986 Masters at age 46, a time in his life when his interests were divided between golf and business. Nicklaus won two majors when he was 35 and two when he was 40, and he didn’t find it any more difficult the older he was.

“I thought winning them at age 40 was just as easy as winning them at 20,” Nicklaus said. “The only difference was that I knew what I was doing at 40 and I wasn’t sure what I was doing at 20. I got lucky when I was 20 because talent carried me through there. But at age 40 I had to be smarter because I didn’t have the talent I had at 20. I suppose I had the talent, I just didn’t know how to get it out of me.

“But I think as you get older you accommodate your aches and pains,” he said. “But you get smarter, too.”

And that’s what makes Nicklaus curious about whether Woods can catch or surpass him.

He remembers how miserable Woods looked at the Champions Dinner on the Tuesday night before the 2017 Masters — “He was not a happy camper,” Nicklaus said — a few weeks before a last-ditch effort to heal his back with fusion surgery.

Nicklaus described Woods as “almost cocky” at this year’s dinner.

“He had an abundance of confidence he would play well,” Nicklaus said.

Nicklaus says he only watches the majors, and even then he isn’t fully engaged in front of a TV. After hitting the honorary tee shot Thursday morning, he went fishing in the Bahamas. He was on his boat Sunday morning during the final round, chasing after bonefish. He came back just in time to see the Masters turn in Woods’ favor at the par-3 12th hole, where Francesco Molinari lost his two-shot lead with a tee shot into Rae’s Creek.

And he watched the players around Woods make it easier for him with mistakes that can’t be made on the back nine Sunday in the majors.

Woods followed that 15th major by missing the cut in the PGA Championship two week ago at Bethpage Black. Woods wasn’t as prepared, from the emotional toll of finally winning another major to feeling sick enough that week to play only nine holes of practice.

The next chance is the U.S. Open at Pebble Beach, where Woods won by 15 shots when he was 24. Nicklaus said Woods is one of the favorites, though he said the competition is deeper — Brooks Koepka, anyone? — and it won’t be easy for Woods to dominate like he once did.

Nicklaus also recalled another moment this year, when he played with Woods and President Donald Trump in early February, which showed why it won’t be easy.

“He played just fantastic, but his neck was bothering him,” Nicklaus said. “And I’m sitting there, ‘Really?’ He shot 64 and everything was just perfect. But he said, ‘I have a little problem with it.’”

Woods played at Riviera and Mexico City, and then decided to sit out Bay Hill as a precaution because of a sore neck.

Nicklaus never ruled out that Woods could reach 18 majors or beyond, even when Woods went two straight years without even playing majors. If Woods’ back holds out, Nicklaus suspects Woods has 10 more years of competing.

Woods is one major closer. He still has three to go.

But it’s a topic again.