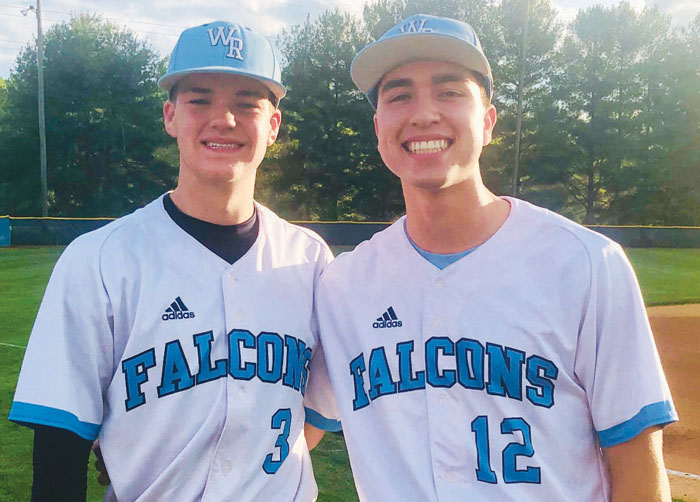 Submitted photo ... West Rowan teammates Carsen Bailey, left, and Jake Perez, have announced that they will continue their educations and baseball careers at N.C. Wesleyan College.

MOUNT ULLA —  Neighbors for a while growing up, and Little League teammates, West Rowan’s Jake Perez and Carsen Bailey will continue their baseball careers together in college.

Both are headed to North Carolina Wesleyan College, a Division III school in Rocky Mount.

“It’s great, but it was by chance, really,” Bailey explained. “We hadn’t planned to go play somewhere together, but we both happened to get offers from the same school at almost the same time.”

N.C. Wesleyan also is the next destination for West Rowan football’s Payne Stolsworth and Joojo Brush, so there will be a significant West presence at N.C.Wesleyan next school year.

After a family move, Bailey and Perez went to different schools and lost track of each other for a while. But when Bailey transferred from Salisbury Academy to West Middle as a seventh grader, Perez was the one who made him feel like he belonged.

“Jake was my first friend at a new school, and so we became best friends,” Bailey said. “That’s been the case ever since.”

They’ve been in a lot of baseball games together. Both were part of the Rowan County American Legion team’s run to the state tournament last summer and proved to be helpful pitchers.

Bailey (1-0) was the hero as a relief hurler in a 10-inning win against Cherryville. Perez struck out six in four innings in a 4-3 win against Jefferson County, Ohio. Perez (2-1) was credited with relief wins against Kernersville and Mooresville.

Perez only pitched in two games. Bailey pitched in seven, but he made them count. He had 17 strikeouts in 16 innings. He got wins against South Rowan and Central Cabarrus and saves against South Iredell and Mooresville, which is playing in the 4A state championship series.

“We had a lot of pitchers,” West head coach Seth Graham said. “The good thing about it is they’re headed to college with fresh arms.”

While they didn’t pitch frequently, Perez and Bailey still played in all 25 West games this season. Bailey was the regular third baseman, while Perez was the starter in right field. Normally, they batted back-to-back for the Falcons in the No. 8 and No. 9 spots in the lineup.

Neither had a high batting average, but they got on base. Perez walked often enough to have a .362 on-base percentage.  He scored 14 runs. Bailey had an OBP of .328.

Asked about the best memory of his senior season, Bailey offered a team-oriented answer.

“I pitched well in some games, but the games I’ll remember most are the ones we won, whether I pitched or not, ” he said. “Especially when we won (2-1 against Western Guilford) in the first round of the playoffs. You win or lose as a team, and playoff games just mean so much.”

Perez excelled defensively and wasn’t charged with an error all season.

“I’ve played all three outfield positions, and I’ve always worked on my defense,” Perez said. “In the outfield, you’re that last line of defense. We focused on holding that guy who got a hit to a single and keeping him off second base, keeping the double play in order.  We worked at making that strong, one-hop throw to the bag.”

“I was determined not to get out-worked by anyone,” he said. “I always hustled. I tried to be a leader and set an example for the young guys.”

Perez and Bailey are both going to N.C. Wesleyan with the idea that they could be two-way players.  They’ve both been told exactly the same thing by N.C. Wesleyan coaches — that they’ll have to show they can’t do it before they’re limited to one or the other.

While it’s harder to predict Perez’s future, it’s likely Bailey will wind up exclusively as a pitcher. He has ample velocity (low 80s), an improving changeup and a breaking ball that he can throw for strikes.

Bailey and Perez are tall, lean kids who are going to fill out long frames as they mature. The 6-foot-3 Bailey is one of the younger graduates in his class.

“They could add 15 to 20 pounds of muscle as college freshmen,” Graham said. “And that often means 4 or 5 miles per hour.”

Both are fine students. That’s essential for athletes headed to D-III. While D-III schools can’t offer athletic scholarships, if the grades are solid enough, they can figure out an academic package to make college affordable.

Bailey, who plans to pitch for the Lake Norman Copperheads this summer, plans to major in exercise science. Perez plans a biology major with an eye on a career in pharmacy.

They’ll try to reach those goals together.

“Jake is a good ballplayer, a good teammate, and a good friend,” Bailey said. “I know he’ll always have my back.”