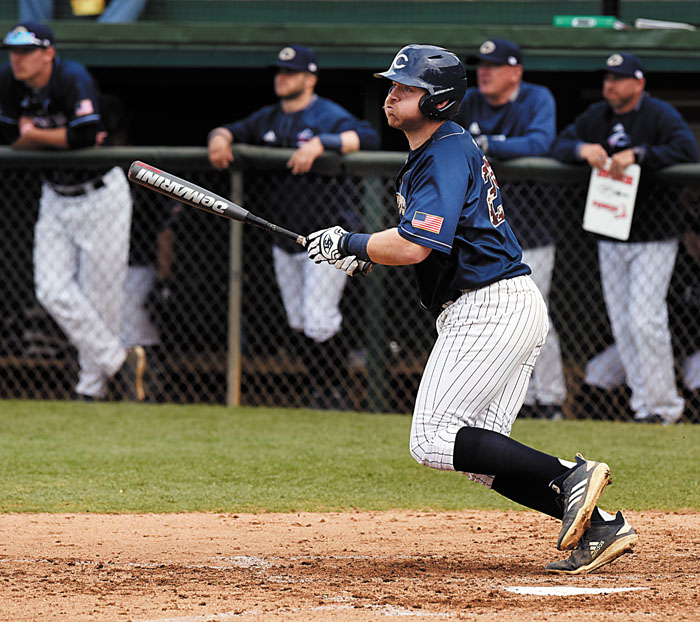 Wayne Hinshaw file photo/for the Salisbury Post ... Catawba’s Heath Mitchem watches his drive to the outfield, during a game against Carson-Newman on March 16. Mitchem, a senior from Carson High School, has helped to lead the Indians to the Division II World Series, beginning this weekend in Cary.

To say the least, it’s been a long, strange journey for Carson High graduate Mitchem, a pitcher his first two seasons for the Indians and a hitter his last two.

The torn labrum that once appeared to be a terrible setback turned out to be the biggest break of his career.

“Honestly, I don’t think I can even put it all into words,” Mitchem said. “But when I had a labrum tear and I had arm problems, it gave me the opportunity to find something else. I had to look for another way to contribute to this team.”

He has succeeded in that.

At 6-foot-3, 220 pounds, Mitchem is a strapping guy. He doesn’t look like a prototypical lead-off man, but that’s what he’s become for Catawba. He batted .370 as a junior.

This season he’s at .329, but with an on-base percentage of .459 that is tied with Hunter Shepherd for the best on the team. He was second team All-South Atlantic Conference. He walks a lot, he hits a lot, and he runs surprisingly well. He’s 11-for-13 on stolen base attempts.

Mitchell has always been able to swing a bat.

“My hand-to-eye coordination is good, so I’ve always been able to make decent contact,” Mitchem said. “Hitting has always come more naturally to me than pitching ever did.”

The son of a coach, Mitchem was a very good athlete in high school, swimming at an all-conference level and punting for the football team.

He hit .402 for his high school career, the best mark in Carson history. As a senior in 2015, he hit a school-record.524 with a steady barrage of opposite-field singles and doubles. He drove in 23 runs and saved four games as a closer. He edged Salisbury High star Riley Myers, his former neighbor and current teammate, for the Mark Norris Award that goes to Rowan County Player of the Year.

In the summer of 2015, playing for a state-championship Rowan County American Legion team, Mitchem batted .438 as a DH/first baseman. He only pitched 11 innings on a staff that included Myers and another current Catawba teammate, Bryan Ketchie. He went 2-1.

Jim Gantt, head coach of Catawba and Rowan County Legion is about as good an evaluator of young talent as there’s even been. When he recruited Mitchem for Catawba, he liked his potential more as a pitcher. Mitchem may have developed into a special hurler, in time, but because of that labrum tear, that’s something we’ll never know.

Mitchem was mostly a singles hitters in high school and never hit a home run. But he’s developed some power in college. He’s hit 22 doubles and seven homers the past two seasons.

“That’s partly some added strength from the weight room, but it’s also just a matter of getting a little older and more mature,” Mitchem said. “I’ll hit a home run, now and then, but when I’m in situations where I really need to drive in a run, I’m still that same old guy. If they pitch me away, I’ll try to slap that single to left.”

Mitchem, who graduated with a business administration degree a few weeks ago, will turn 22 on June 6. Maybe he’ll get to win a game in Cary for the Indians on his birthday.

“This has been a special team, a true brotherhood,” Mitchem said. “We’ve taken a lot of bus rides together, stayed in a lot of hotels together, practiced a lot of falls together and won a lot of games together. I know I’ll have a special bond with these guys for the rest of my life. That team camaraderie — that’s been the best part of playing baseball for Catawba.”

NOTES: Catawba (47-12) takes a 13-game winning streak to Cary, including two wins at top-ranked North Greenville, and hasn’t lost since April 13.  … Ranked 14th in the most recent D-II poll, Catawba plays 10th-ranked University of California San Diego at 3 p.m. on Sunday. The double-elimination tournament gets under way Saturday. … Ketchie (9-1) is the probable starter for Catawba’s first game. Shepherd (7-4) and Sawyer Strickland (8-2) will probably be the next two starters.  … Myers, a recent Catawba graduate, had a medical redshirt season due to a back injury and still has a year of eligibility. Myers (9-0) will be a graduate student at Wake Forest for the 2019-20 school year and will pitch for the Demon Deacons. He already has a locker and a spot on the team … Catawba closer Peyton Williams is only a sophomore, but he turned 21 earlier this month, so he’s eligible for the MLB draft. He throws mid-90s and may hear his name called. … A story on Catawba assistant coach Michael Lowman is upcoming.