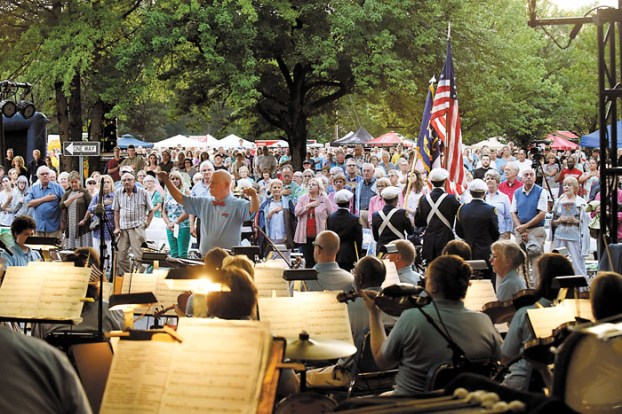 The annual Pops at the Post concert is next Saturday at the N.C. Transportation Museum Back Shop. Wayne Hinshaw/for the Salisbury Post

3. In an effort to address some of the capital needs for Rowan-Salisbury Schools, County Manager Aaron Church has outlined a proposal that would allocate how much to the district’s capital budget by 2021?
A. $81.5 million
B. $144.7 million
C. $220 million
D. $315 million

4. A United Way Day of Caring project led to the construction of what at the South Rowan YMCA?
A. A parking lot
B. A soccer field
C. Two outdoor basketball courts
D. A beach volleyball court

5. The Salisbury Symphony always plays five particular pieces as part of the music selections for Pops at the Post, which will be held Saturday in the N.C. Transportation Museum’s Back Shop. But Maestro David Hagy also likes to come up with a different theme for other compositions at each Pops concert. What are the themes this year?
A. Newspapers and cowboys
B. School days and summer
C. Baseball and food
D. Patriotism and transportation

6. Even though Salisbury is 21st in the state in population, it ranks eighth in North Carolina for the number of what?
A. Barbecue restaurants
B. Historic tax credit projects
C. Retail stores
D. Carwashes

7. Salisbury Mayor Al Heggins has invited several groups and individuals to a City Hall meeting Tuesday morning to discuss what?
A. The Empire Hotel
B. Bell Tower Green
C. “Fame,” the Confederate monument
D. The future of Knox Middle School

8. Among the showcase items Helen Brown offered at her semiannual yard sale for cystic fibrosis research this past Friday and Saturday were woodcarvings by who?
A. Bob Timberlake
B. Carl Spencer
C. Hugh Morton
D. George Raynor

9. Donnie Barger will retire this week from the Salisbury Shop of Martin Marietta, where he has worked for 46 years. The company surprised Barger last Thursday at a retirement luncheon by giving him a ride in what?
A. Helicopter
B. Hot-air balloon
C. Giant rock crusher
D. The Goodyear blimp

10. Kathleen Bourque of Salisbury and 1st Lt. Conor McDowell of the Marine Corps planned on being married someday, but their strong bond ended tragically May 9 when McDowell was killed during a training exercise at Camp Pendleton. Where is this Marine Corps base?
A. Arkansas
B. Maryland
C. California
D. Florida

‘He loved me until the day he died’: A Marine and a Salisbury girl found soul mates in each other

For Kathleen Bourque and Conor McDowell, it really was love at first sight. When Kathleen walked down the stairs at... read more