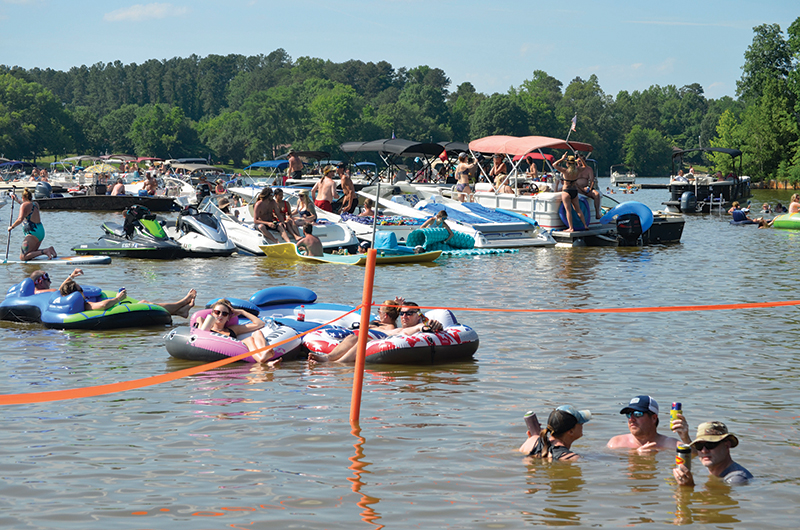 High Rock Lake was filled with boaters at the 2nd annual Boats and Floats Music Festival where Darrell Harwood performed in addition to a number of regional bands for a benefit concert for the Leukemia and Lymphoma Society. The event was held at TJ's Restaurant. Shavonne Walker/Salisbury Post

Three years ago, Melanie Hodges’ mother, Kay Owens, was diagnosed with non-Hodgkin’s lymphoma. That is one of the reasons she attended the Boats and Floats Music Festival on Sunday.

The festival, in its second year, is presented by China Grove native and musician Darrell Harwood. It was held at TJ’s Restaurant at High Rock Lake and featured a number of regional bands. The concert benefitted the Leukemia and Lymphoma Society.

Hodges attended the festival for the first time with her husband, Lee. The two sat in the shade under the restaurant patio.

“It’s a wonderful thing,” Hodges said of the concert.

She was happy to have the chance to attend. Just three months ago, Hodges had open-heart surgery.

During the festival, Harwood spotted Hodges and her husband and asked if they were all right in the heat.

“I just hope somebody can take advantage. I just want somebody to benefit from it,” Harwood said.

Harwood said the bands — Mother Trucker, Red Dirt Revival, Trial by Fire and 7 Days Band — all donated their time for the festival. TJ’s Restaurant donated $1,500 to the cause.

Harwood said he especially was thankful to Davidson County Cornhole, Kepley’s Grading and Hauling, and Dianne and Clyde Motley.

“So many people who volunteered,” Harwood said, adding that the food and corn hole boards were donated.

The reason Harwood said he continues to organize benefit concerts like the one Sunday is because of the outpouring of support he gets from the community. Over the past two years, Harwood said various benefits have raised $80,000.

Cancer has struck close to home for Harwood, including for himself; his father, Ronnie; his brother-in-law; and a family friend.

Kim Lefler attended the festival for the first time with some friends.

“When you have somebody, in this heat, it says a lot,” Lefler said.

She said the festival was her kick-off to a summer full of activities, including going for a ride on a friend’s boat.

Kevin and Teresa Henderson have been fans and supporters of Harwood since 2010.

He’s “just got a heart of gold,” Teresa said.

She volunteers with the Stand Together Festival, held in China Grove.

Carmen Brown and her friends, all of whom never miss a Harwood concert. To ensure they all know about them, someone in the group flags an event on Facebook. On the day of the event, they call each other to plan when they’ll meet.

“He gives back to the community. He’s amazing,” Brown said.

Donations can still be made to support the Leukemia and Lymphoma Society through the Stand Together Music Festival Facebook page or through Harwood’s Facebook page.