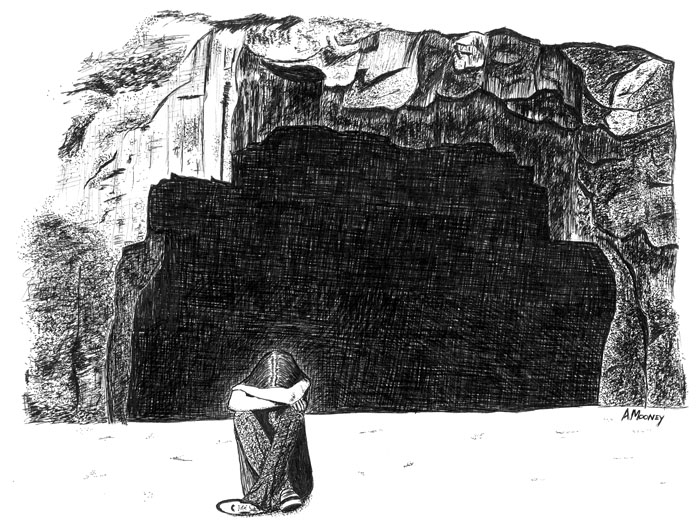 I’d just written a long post for Facebook about a two-month struggle I’d had with a paralyzing, crushing anxiety. It had affected my ability to work, and it had affected my ability to be a wife and homemaker. Going to the grocery store was overwhelming. So was throwing in a load of laundry. So was taking a shower. Stuff I did everyday without a second thought was now impossible.

I was almost to the point of calling my editor, Josh Bergeron, and telling him I couldn’t send stories for a while. I’ve been writing all my life. While my second-grade classmates were writing a sentence or two about dogs or cats or flowers on that blue-lined paper, I was essentially writing ad copy about how Joy dishwashing liquid makes your dishes sparkly clean.

It brought up an important question: If I’m not a writer, who am I?

Fortunately, I have a wonderful doctor here in Raleigh. Dr. Steve Liebowitz is my husband’s doctor, and he was Jim’s parents’ doctor. Great guy. My husband and I went to see him on April 9. He told us that as far as medications — I’d tried several antidepressants, with no luck, because I wasn’t really depressed — he had reached at the limit of his expertise as far as medications. He asked if I’d like to see a colleague of his, a psychiatrist who could better prescribe the medication I needed.

Hell, I’d go to the veterinary school at State if he’d suggested that.

Ten days later, I sat in the psychiatrist’s office. We talked for a few minutes and then Dr. Timothy Carlson said, “I’m really not sure why this happened.”

And I’m sitting there thinking, “Um, I’m paying you this obscene amount of money and you’re telling me you don’t know?!?”

That got my attention.

His guess was that a brief period of sleep deprivation, the fact that I was in my early 50s, and the fact that I picked up and left my whole life almost 2 1/2 years ago when I remarried and moved to Raleigh may have all combined to trigger the anxiety.

And because of my health history — I’d had a post-partum manic episode after my son Andrew was born nearly 23 years ago — he recommended I go back on the medicine I was on then. Otherwise, even though I’d had this horrible period of anxiety, there was a chance I’d go manic again — and fast.

And trust me, nobody would want that.

I filled the prescription, took it as directed, and began to feel better almost immediately. Part of it was the medication, but more so, it was because we had a plan.

I thought long and hard before I put that post on Facebook, but then I thought, “I’ll be damned if I want anyone else to suffer the way I have.”

Because if someone as extroverted as you can get, someone who loves people and loves life can have such a harrowing episode, what about someone who’s less self-confident and does not have such a wonderful support system?

I hit the return key.

About a minute later, a post popped up from Brenda Crosby Bouser, a longtime friend from my early days at the Post.

“I identify, Susan,” she wrote. “Good girl for seeking help.”

“This is beautiful,” wrote Jessica Goodman, a friend from St. John’s. We ended up in the same new members class years ago, when my family and I came from my home church and she came from First Baptist after marrying husband Nick. “It’s beautiful because it’s real, honest, messy, and hopeful. I’m in awe of your strength. Also, this testimony is Baptist-y of you.”

“Thank you for sharing this Susan,” wrote my friend, jeweler Debbie Barnhardt. “We all have our struggles, and I saw a lovely counselor, Luanne Grambo, for five years who I consider now one of my dearest friends. Emotions can be very hard to handle and so many don’t get help so maybe you sharing will help someone to.”

“Thank you for sharing your struggles so we can pray for you!” wrote Angela Lippard, a friend since China Grove Elementary days. “Great you can identify and formulate a plan to get things on the right path, and that you have so much support!”

Her remark gave me pause. I never thought to ask for prayers. Duh.

And on and on it went. The remarks flowed in all morning, like ocean waves to the shore. Clearly, I’d struck a chord with people. All along, I thought I was alone. Turns out I was in the boat with many others — and it’s a pretty big boat, y’all.

Bill Burgin, a prostate cancer whom I’d just written about on April 21, sent me an email.

“My father struggled with manic-depression for the last third of his life,” he wrote, “so I have some knowledge of how bad depression can be. You are exactly correct that getting help is the key. Dad did much better after he made a connection with his psychiatrist. You do have to stay after it. I also found that talking with friends and family helps, especially if they have some knowledge of what you are going through.”

My dear friend Kristy Woodson Harvey also dropped me an email. I especially appreciated hearing from her, as she was crazy busy preparing for her book tour to support her newest novel, “The Southern Side of Paradise,” which published May 7. She sent me an advance reader copy and it’s fabulous, y’all.

“You have made me cry this morning, which is quite the feat,” Kristy wrote. “I am so, so sorry to hear that you have been struggling and so thankful that you have such a wonderful support system around you. What you have been through these past months and years losing people you love and being the one to carry their stories must have been so traumatic for you, and I have often wondered how you were able to handle all of it. Not that the two things are related, but needless to say you have had a lot on your plate. I am so glad that this storm has passed and I hope your new routine is the answer for you!”

I received a Facebook message from a dear friend who used to teach in Rowan County.

“Thank you for your post,” she said. “You are not alone. I have struggled with anxiety for years. No one really talks about it publicly. No one posts about it. And so we all just assume it’s only us. My husband doesn’t have anxiety, so it’s hard for him to understand. I just assume no one else experiences it!”

We had lunch together on Wednesday.

She had major post-partum depression after the birth of her first child, now 3, but never told anyone. “I didn’t know what was happening. I was living in another state, away from my family. I was just very isolated, and in such despair.”

Things she feared would never return to the way they were — her body, her happiness, her life — did in fact come back. Two months, before the birth of her second child in March, she decided to be proactive and started seeing a psychologist.

“This time around, I’m having more anxiety than depression,” she told me. “But I’m doing better.”

She will see her doctor soon for her six-week post-partum check-up. Her psychologist has encouraged the former English teacher to follow the three Ws — walking, writing and drinking water.

And it’s helping, she says, because she’s doing it consistently.

And she says if doesn’t feel better after continuing to walk, write and drink plenty of water, she’ll talk to her doctor about medication.

Another dear friend — yeah, I know, I have a lot of those — also messaged me.

I spent the night with her Tuesday night so that I could be close to Charlotte on Wednesday morning to be with a family member who was having surgery at CMC Main.

In January, she too, was experiencing sleep interruptions, crying and “crushing anxiety.” Yep. She kept working, but began to change her eating habits.

“We like our sugar and I like to bake,” she said, but she has still cut as much out of their daily meals as possible. She’s making a point to exercise. Because she is 44, she attributes her anxiety to hormones, and is preparing to stop taking birth control pills. She’s open to counseling, but has no immediate plans to start. She takes a low dose of anti-anxiety medicine for situational anxiety when she needs it.

“There were some days I didn’t want to leave the house,” she said. “I was almost agoraphobic. I did it, but it was difficult. Most days now, I’m good.”

To get a professional perspective, I spoke with Dr. Jessica Blumenthal, my OB-GYN when I lived in Salisbury. Anxiety and depression can be common for women after delivery and during menopause, she said, because of hormonal changes.

Being proactive and getting appropriate treatment makes a big difference, she added. “Make sure you bring all your concerns to your gynecologist.”

So I wrote that very long Facebook post and this very long article all to say: if you are struggling, too, please, please, please reach out. Please do not suffer. Certainly, dealing with our emotions is not as easy as having a broken arm and going to the doctor and saying, “Fix this.” Because, they’re like, “Oh hey, you have a broken arm. Let us put a cast on for you.” You can’t see what’s going on with your thoughts and your emotions. But they can be fixed. It just takes some time and some trial and error.

Ironically, May is National Mental Health Awareness Month. I’ve finally broken my 31-year rule of journalism: Report the news, do not become the news. But that’s OK. I’m happy to speak up for those who cannot. I want you to remember that you are not alone. There are many of us who have been through this.

It’s a mighty big boat, and we all need to row together.