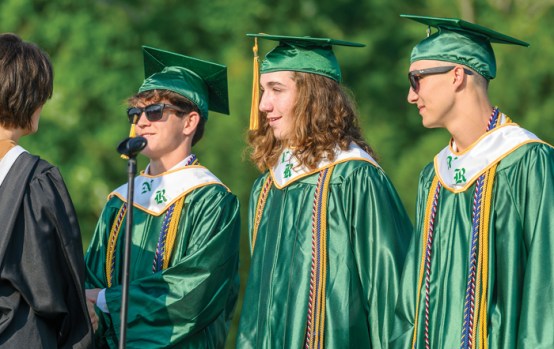 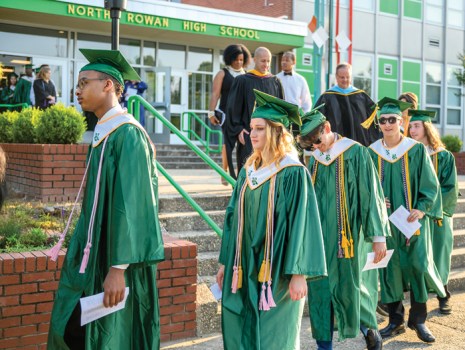 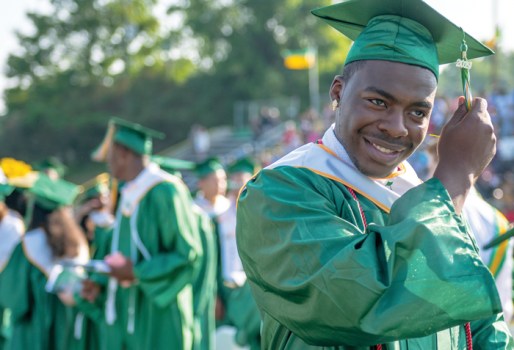 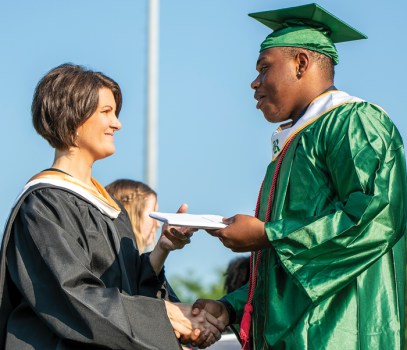 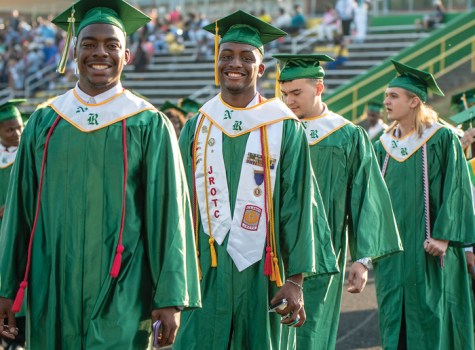 SPENCER — Tears flowed from the eyes of many of the 132 North Rowan graduates as they walked across the stage Saturday at Eagle Stadium.

For some, it meant they were leaving behind the North Rowan High “family” they’ve known for the past four years.

This year’s valedictorians were Spencer Everhart, Jared Hensley and Hans Roemer. The trio encouraged new graduates to seize special moments and to find a purpose that is meaningful to them.

Hensley told the students that, at some point, all good things come to an end so they should make the most of them.
“We’re not just peers, we’re family,” Everhart said.
Roemer reminded them that they’d overcome challenges, including the fear that the school could be closed.
After the ceremony, family members and friends gave congratulatory hugs, flowers, and balloons.
“North Rowan is really a community, a family and being part of that family has meant so much to me,” said graduate Spencer Gettys.
Gettys said he’ll never forget the friendships he made.
“I could not have asked for a better high school,” he said.
Gettys said he wants to pursue a career in journalism, but first he’ll attend UNC-Greensboro where he plans to major in English or communications.
Miyana Stevens talked about things she’ll remember. Things she’ll miss the most are pep rallies and the feeling as the band took the field for football games. Stevens played the sousaphone.
Stevens, whose twin sister Myyana also graduated, said she plans to study theater at Pfeiffer University and plans a career as an actress.
Ty’Zai Lyles was overwhelmed with emotions as his family members doled out hugs and congratulations.
Lyles, whose brother, ShyMek Lyles, also graduated, has plans to study criminal justice at North Carolina Wesleyan College with a goal of becoming a police officer.
Lyles said he planned to attend a cookout at a friend’s house and then have dinner later with his family.
It’s been a rollercoaster for Karen Bates, but the graduate is happy that she had reached such a milestone.
“I had a little too much fun,” she said laughing, but the thing she’ll miss the most about her high school experience is the community-feel of the school.
Bates will attend High Point University.
North Rowan’s 2019 graduation came earlier than most high schools in the Rowan-Salisbury system because of a choice to utilize calendar flexibility and begin classes before Rowan-Cabarrus Community College’s start.