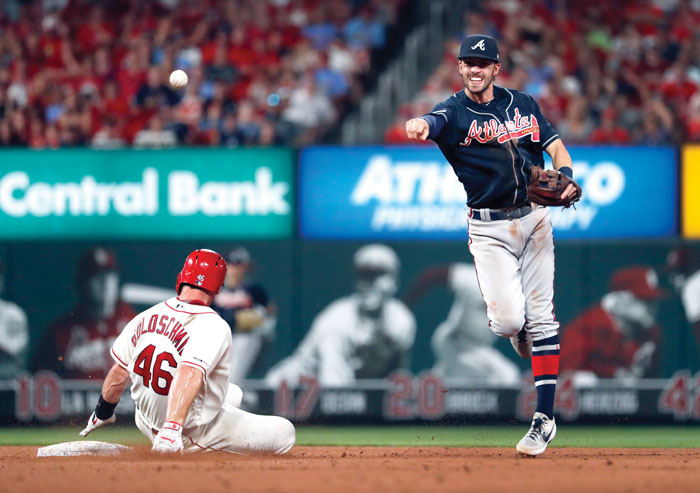 St. Louis Cardinals' Paul Goldschmidt (46) is out at second buts Atlanta Braves shortstop Dansby Swanson, right, is unable to turn a double play during the eighth inning of a baseball game Saturday, May 25, 2019, in St. Louis. Cardinals' Paul DeJong was safe at first. (AP Photo/Jeff Roberson)

By JASON L. YOUNG Associated Press
ST. LOUIS (AP) — This time, the St. Louis Cardinals made a couple of big plays down the stretch.
Hasn’t happened very much in May.
Pinch hitter Jedd Gyorko connected for a three-run homer during St. Louis’ four-run eighth inning, helping the Cardinals top the Atlanta Braves 6-3 on Saturday night.
“That’s a big win for us,” said Gyorko, who has seen limited action this season. “We’ve been struggling, this has been a tough month. Hopefully, we can look later this month and going into next month and this is a win that got us going.”
Paul Goldschmidt and Matt Carpenter each had three hits as St. Louis improved to 7-15 in May. The Cardinals (26-25) were in danger of falling below the .500 mark for the first time since April 7.
Andrew Miller (2-2) worked a scoreless eighth for the win, and Jordan Hicks got three outs for his 10th save.
“That is a representation of how we do when we put it all together,” Cardinals manager Mike Shildt. “It’s pretty special when you see it there. It was hard fought across the board. Guys scratched, clawed, believed, and dug in, and got it done.”
The Braves wasted another solid performance by Mike Soroka, who allowed two runs, one earned, and five hits in six innings. The rookie right-hander has allowed one earned run or less in his first eight starts this season.
“I just know he’s pitching really good,” Braves manager Brian Snitker said. “I just sit and watch him out there and how he just keeps pitching. You don’t know if he’s five up or five down, he’s just there making pitches. He’s fun to watch.”
Nick Markakis had two hits and scored a run for the Braves, who had won four of five. Austin Riley, Tyler Flowers and Ozzie Albies each had a run-scoring double.
Atlanta right-hander Dan Winkler was charged with four runs in one inning. He seemed to be in good shape until a 2 minute, 19-second review overturned what would have been a double play. That allowed Paul DeJong to stay at first and helped fuel the Cardinals’ rally.
DeJong scored on Carpenter’s single before Gyorko hit a drive to left-center for his first homer of the season. It was Gyorko’s second career pinch-hit homer.
“It just spun,” Winkler said. “It was a cutter that didn’t move, right down the middle. It spun, it stayed middle and he hit it a long way.”
St. Louis grabbed a 2-1 lead on Goldschmidt’s RBI single in the fifth. But Flowers and Albies each drove in a run after Carlos Martinez relieved Dakota Hudson with one out and a runner on third in the seventh.
Hudson was charged with two runs and five hits in the longest outing of his career.
TRAINER’S ROOM
Braves: OF Ender Inciarte (lumbar strain) hasn’t thrown or hit yet, and the Braves hope more work in the pool and some rest will get him ready for a return.
CIVIC PRIDE
The Cardinals get a rare Memorial Day off Monday, marking just the second time since 2000 that St. Louis hasn’t played on the holiday. But the team pointed out in its pregame notes that the St. Louis Blues play Game 1 of the Stanley Cup Final that day at the Boston Bruins.
STAYING THE COURSE
The Braves have three of the next nine days off, allowing the starters to get some extra rest. They’ll stick with their current rotation.
“We’ll just continue through and give everybody the extra days and take advantage of that,” Snitker said.
UP NEXT
Braves: RHP Julio Teheran (3-4, 3.67 ERA) goes for his second win in a row after suffering a three-game losing streak. He has made it past the sixth inning just once this year, going seven in a 4-3 loss to San Diego on April 30.
Cardinals: RHP Jack Flaherty (4-3, 4.19 ERA) has surrendered four or fewer hits in seven of his last eight starts. However, St. Louis is only 4-4 in those games, including getting shut out twice.