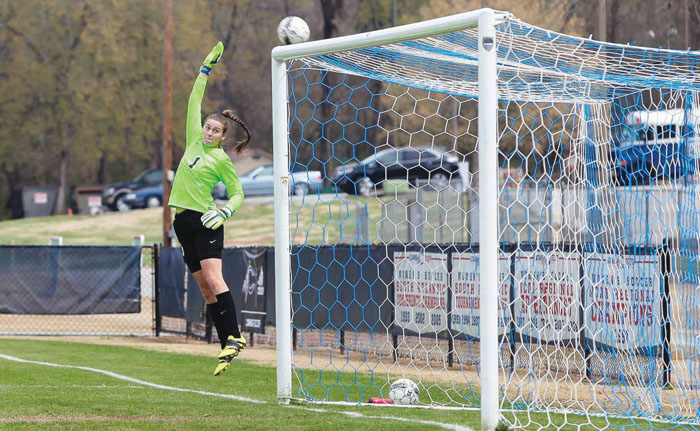 Submitted photo ... Gray Stone’s Katie Leckonby punches a shot on goal over the crossbar during a recent game. Leckonby, who resides in Salisbury, has announced that she will continue her education and soccer career at Fairleigh Dickinson University in New Jersey.

SALISBURY — The first thing you need to know about Katie Leckonby is that she’s a busy person. And busy people, it is generally agreed, find time to get things done.

So it comes as no surprise that the recent Gray Stone graduate intends to receive a master’s degree from New Jersey’s Fairleigh Dickinson University four short years from now.

“You can get a master’s in five years, but I’m getting mine in four,” explains Leckonby, an acrobatic goalkeeper who helped Gray Stone reach the third round of the 1A state playoffs. “I’m bringing 45 credits with me. That’s just me. I like having a lot to do and staying busy.”

Don’t fault her for that. Leckonby plans to major in business and pursue a career in accounting. She accepted a combined academic/athletic scholarship last fall and will arrive on campus in early-August.

“I was looking at everything,” said Leckonby. “The campus, the academics, the soccer program. I didn’t really care where the school was. I was looking at business programs and Fairleigh Dickinson has a pretty good one. The opportunities to succeed are there.”

Leckonby also feels confident about contributing to FDU’s Division I women’s soccer program. She arrives with an impressive resume — a rugged, 5-foot-6 netminder who backboned Gray Stone to 16 consecutive wins and this spring’s Yadkin Valley Conference title, a 17-7 overall mark and a post-season triumph against Murphy. Not too shabby, considering the Knights persevered through enough injuries to fill a medical journal.

“We had a torn ACL, a ruptured achilles, a broken foot and four concussions over the course of three weeks,” Leckonby recalled. “Then we lost our center back just two games before the playoffs. Fortunately, I survived the whole year. I think if we didn’t have so many injuries, we might have gone farther. The team just broke down toward the end of the year.”

It ended with a disheartening, 7-2 loss at South Stokes on May 15.

“That team was fast,” Leckonby says. “They would play the ball over our midfield and sprint after it. Their game-plan was to split the defenders and run — and they did it very well.”

Leckonby finished the season with an 11-7 record, nine shutouts and somewhat-pedestrian 1.34 goals-against-average. She also scored five goals as a field player. “Great year, except the last game was brutal,” says her mom, Cris Snarsky-Leckonby. “Katie must have made 30 saves.”

While one chapter of Leckonby’s soccer career ended, another is about to launch. Significantly, she had other collegiate choices. Her father, Larry, is the athletic director at Catawba and the Indians’ coach, Nick Brown, came calling early in the process. But he was promptly rejected. “I told Nick it’s not happening,” she offers without hesitation. “He knew I wasn’t coming (to Catawba).”

Other suitors included Division III Washington & Jefferson in Pennsylvania, Division I St. Joseph’s in Philadelphia and nearby Wofford, a DI school that limped to a 5-13-1 record last autumn. “They offered me a nice package and a starting position,” Leckonby recalls. “But the coach had only been there a week when I met her. So I wasn’t sure what to make of it.”

Instead, she found a mutual match in the shadows of NYC with FDU. “I liked it right away,” she says. “I liked their business school, their coach and their GK coach. My mom wanted me to wait a week before putting a deposit down, but I had already made up my mind.”

Leckonby, a former NC Fusion club player, clearly wasn’t designed for the gentle cycle. She’ll spend June and much of July playing against college-level opponents for Lake Norman in the misnamed Women’s Professional Soccer League. “But really, I’m just there for training,” she acknowledges. Later this summer she’ll attend a high-intensity goalkeeper’s camp in Chapel Hill.

“I know,” she says, flashing a smile. “I’m a little crazy. All goalies are. We throw ourselves at people who are trying to kick us. We literally dive at people’s feet.”

Yet, here’s what makes Leckonby so unique: “I’m a crazy person who thinks soccer is fun. I think math is fun. I don’t keep a phone on me, which no one understands. But all of this is what I do. And right now, there’s nothing else I want to do.”