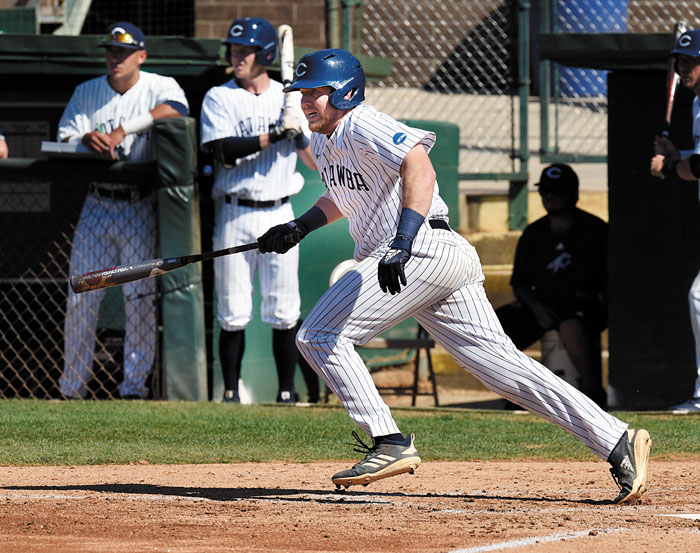 TIGERVILLE, S.C. —  Speed kills, but sometimes it can keep you alive.

Center fielder Bryce Butler’s wheels made the difference. The fastest player Catawba has had in many years, his diving catch in left-center for the third out in the 10th inning saved the Indians. His infield hit to shortstop in the 14th scored Jackson Raper from third base and finally won it for Catawba.

Catawba, which has taken 12 straight games, has rolled unblemished through the postseason — winning the South Atlantic Conference Tournament, a sub-regional hosted by Newberry last weekend, and  finally, the Super Regional, hosted by North Greenville (45-11).

Next for the surging Indians, who tied for third place in the SAC regular season, is the eight-team, double-elimination NCAA Division II World Series in Cary, June 1-8. Catawba, which reached the World Series in 2012 and was national runner-up in 2015, will be making its third appearance in Cary.

“It’s all surreal right now,” said Catawba reliever Riley Myers, one of the pitching heroes. “We’ve all been trying to get where we are right now for four years, and now we’re here. North Greenville had taller guys, heavier guys, more talented guys, on paper, but we got it done. In 95 degrees and playing on turf, we got it done. Not many teams could have done what we did.”

Catawba got a pivotal relief effort from Sawyer Strickland, who held North Greenville scoreless for a long time, taking over for starter Hunter Shepherd to start the fifth inning and exiting to an ovation with two outs in the 10th.

Caleb Link got one out in the 10th — on Butler’s remarkable catch of a line drive hit by cleanup man Adam Sasser that would’ve plated two runs.

Then it was up to veteran right-hander Myers, and he was brilliant again. He shut down the Crusaders in the 11th, 12th, 13th and 14th, striking out four and giving Catawba, the home team for Game 2, numerous chances to win. Myers (9-0) was the winning pitcher in both games in the Super Regional.

Myers was in the bullpen when Butler made his great catch in the 10th.

“I was stressed out when that ball was hit,” Myers said. “But Butler got it. It was just an unbelievable play, but this is an unbelievable team that can go all the way.”

Catawba had 14 hits, with Shepherd and Heath Mitchem producing three each.

North Greenville took a 1-0 lead in the first on John Michael Faile’s home run. The Crusaders made it 3-0 in the top of the fourth when they bunched four hits against Shepherd.

Jacob Nester’s one-out double triggered a three-run bottom of the fourth for the Indians. Butler’s speed  helped force a throwing error on a ground ball, and Nester scored Catawba’s first run.  After hits by Mitchem, Shepherd and Joe Butts and another error by the host team, Catawba had fought back to a 3-all tie.

North Greenville got great pitching for nine innings from starter Tucker Burgess and excellent relief from Danny Kight. Catawba finally scored against closer Kip Rollings, who also took the loss in Friday’s game (also by a 4-3 score) — his only two setbacks this season.

Raper walked to start the inning. Cameron Morrison singled him to third with none out, but Rollings struck out the next two hitters and it appeared Catawba might squander a golden opportunity.

But then Butler rapped his game-winning infield hit —  and the Indians dog-piled in an unusual place — behind first base.

“I was near the bottom of that pile,” Myers said. “I wanted to be the first one to jump on Butler’s back.”

Catawba was the “home” team in Saturday’s game. Had North Greenville won the game, the two teams would have had to play a deciding Game 3 last night. The Crusaders entered the Super Regional with a 14-game winning streak but ended their season with the two losses to Catawba.