Pops at the Post — Spencer contests bring out friendly competition 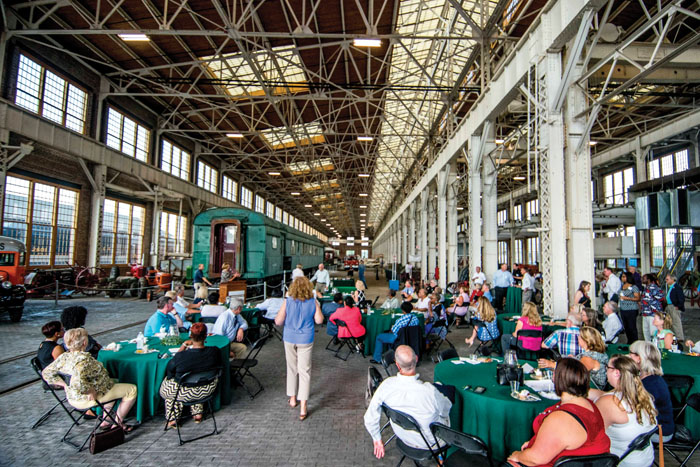 JON C. LAKEY / SALISBURY THE MAGAZINE The Large back shop building is a popular place for meetings and parties.

Pops co-chairs Joe Morris and Audrey Eudy asked Spencer First Lady Marla Gobbel to organize some friendly competitions for this year’s Pops — competitions that would reflect the nature of Spencer — and they have done just that.

Marla gathered together her Dream Team — Jacquelyn Jensen, Beth Nance and Drew Morris Roseman — and developed the contests for this year’s Pops at the Post, Railway Edition.

“We see all the little kids going to the Transportation Museum for Thomas each year,” Gobbel said, “and they’re all dressed up to look like a train engineer. We wanted to capture that for the Pops.”

The “Little Railroaders” contest is open to children aged 10 and under, male and female. Costumes on a train-based theme will be judged on completion and originality. Parents can gather their Little Railroaders at the competition tent near the tailgating area at 6 p.m. Judging will immediately follow.

To recognize Spencer’s new law allowing golf carts on town streets, the women have organized a golf cart parade. Participants may decorate their golf carts along one of two themes — patriotism or railroads. Decorating one’s golf cart is not required to participate in the parade.

Golf carts will line up across Salisbury Avenue from the Transportation Museum, at Park Plaza, then drive across to the Museum and take a loop around the grounds. Golf carts should be in the Plaza parking lot no later than 5 p.m. Judges will select best-decorated golf carts immediately after the parade.

Anyone who wants to participate in either of the contests should send an email to popscontests@gmail.com, stating their desired contest, theme, name, phone number and email address.

The women have decided to delay the brownie contest for another year.

As always, tailgaters may decorate their tents. The themes this year are patriotism or transportation. Early in the evening, Pops board members will stop by and ask if tailgaters want their tents judged. The women of Spencer will serve as judges. Keep an eye on the Pops website, www.popsatthepost.org and the Pops Facebook page for the opportunity to reserve a tailgating spot. Because of the new location, there is room for 60 tailgate spots this year, double the usual number of 30 in downtown Salisbury.

All contest prizes are gifts or gift certificates from local Spencer businesses. Be sure to register your plans to compete at popscontests@gmail.com.