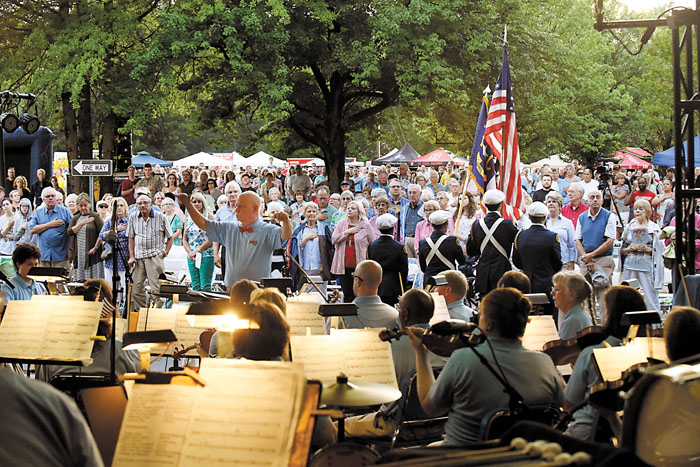 The annual Pops at the Post concert is next Saturday at the N.C. Transportation Museum Back Shop. Wayne Hinshaw/for the Salisbury Post

Maestro David Hagy has developed the symphony’s program for this year’s Pops at the Post, Railway Edition, and, as usual, it’s a dynamic and varied lineup.

Five of the pieces are played at the Pops every year.

They’ll start, as always, with John Williams’ take on the “Star Spangled Banner.”

“It’s so beautiful, starting with only three flutes, the quietest thing you can imagine. Halfway through, it’s full-out with cannon and everything. I think it’s the most patriotic version I’ve ever heard,” says Hagy.

Hagy says, “Pops is our opportunity to show off our symphony. I like the general public to get a view of at least one piece we’ve done at a regular concert.” This year it’s a piece from Prokofiev’s 5th Symphony. He says it’s his second most well-known symphony and was written during World War II.

He speaks with his typical enthusiasm about this piece. “There’s a little bit in it that’s eerie, spooky, perhaps coming from the War. The piece starts with 20 instruments, then builds so intensely that it’s just going to blow you up!”

The piece lines up perfectly with the two themes of the night. Because this year is the 75th anniversary of D-Day, a theme of the concert is World War II. The Pops board has been busily finding World War II veterans to bring to the concert to be honored.

In honor of the theme the orchestra will play a medley of the five armed forces anthems.

The second theme of the night, due to the location, is transportation. Hagy tried to incorporate a wide range of transports, and succeeded by including ships, trains, rocket ships and subway.

These pieces include, “My Heart Will Go On,” from the movie “Titanic”; “Chattanooga Choo Choo,” “The Atchison, Topeka and Santa Fe,” and “I’ve Been Working on the Railroad,” all train pieces from the 1930s and ’40s. The Atchison piece features an arrangement by local trombonist Chuck Farmer.

“Take the ‘A’ Train,” was written by Billy Strahorm, Duke Ellington’s major writer. The song is about a subway ride up to Harlem to see the band. The featured artist for this piece is Tyvaun James, a pianist from Livingstone College. Hagy says while the arrangement is for orchestra, he has created a section that repeats, presenting James the opportunity to improvise. “I’m hopeful the audience will grasp the amazing talent Tyvaun has,” Hagy says. “He’s about the best improvisationist I’ve ever seen.”

Hagy admits to being a bit of a Trekkie, but rather than featuring “Star Trek” music, he’s selected the theme to “The Orville.” According to Hagy, “The Orville” is a slightly humorous takeoff on “Star Trek, Next Generation.” The piece has great orchestral themes and is only a minute long.

He follows that with a suite from “Back to the Future.”

In the second half of the show, the orchestra revisits “Variations on a Shaker Melody,” from “Appalachian Spring.” Hagy says the piece is very complicated, with mixed meter.

Of course, it wouldn’t be the Pops without the “1812 Overture,” the “Salisbury Post March,” and “Stars & Stripes Forever.”

If the audience seems to desire encores, Hagy may have a trick or two up his sleeve. The symphony portion of the Pops evening starts at 7:30 and will end at 9:30 “ish,” he says, with a twinkle in his eye.

Pops at the Post concert gets a new time…