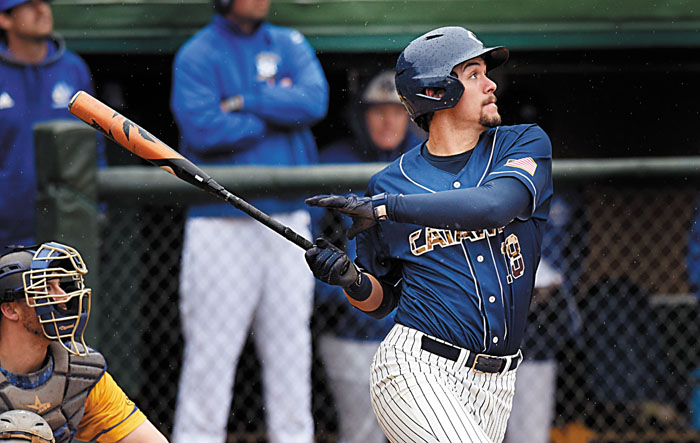 The Game 1 win in the Southeast Super Regional best-of-three series against the host and No. 1-seed Crusaders saw four lead changes and came down to a nail-biting conclusion. Catawba closer Peyton Williams struck out the side in the ninth inning, with the tying run on first base.

Behind steady left-hander Bryan Ketchie, who came into the game with a 9-1 record, Catawba (46-12) held a 2-1 lead for much of the contest. Ketchie had settled in after allowing a first-inning home run to John Michael Faile, allowing just two singles through the first six innings.

But in the bottom of the seventh, Ketchie, a junior from West Rowan, struck out first-inning nemesis Faile, but then issued his first walk of the game to Adam Sasser. He then hit Jeffrey Chandler with an 0-2 pitch and for the first time in the game, the Crusaders (45-10) had a runner in scoring position.

A wild pitch from Myers brought in Chandler and suddenly, the Crusaders had a 3-2 lead.

But in the eighth inning, Catawba, resilient all season, immediately bounced back against North Greenville closer Kipp Rollings, who relieved starter Michael Giacone. Three straight singles from Jeremy Simpson, Hunter Shepherd and Joe Butts, tied the score at 3-3 with no outs.

After an out, Shepherd stole third base and catcher Faile’s throw went into left field. Shepherd jumped up and trotted home for a 4-3 Catawba lead. Rollings was able to retire Cam Morrison and Poteat, escaping further damage.

Myers returned to the mound in the eighth for Catawba and got the first two outs easily. He then walked Faile but got Sasser to line out to first baseman Shepherd.

Catawba nearly added an insurance run in the top of the ninth, but a great defensive play halted the chance. Jacob Nestor had a leadoff double and eventually advanced to third base with two outs. Simpson then followed with a towering blast to right-center field but the Crusaders’ Josh Senter made a diving grab on the warning track, ending the inning.

Gantt then turned to closer Williams for the last three outs. Williams struck out the side around a hit batsman, securing the victory and his 12th save of the season. The verdict snapped North Greenville’s 14-game winning streak.

The final score made a winner out of Myers, who moves to 8-0. Rollings suffered his first loss on the mound in six decisions.

Faile’s homer in the first inning had given the Crusaders a quick 1-0 lead.

The Indians picked up two unearned runs in the third inning off Giacone, who had started the night with a 10-1 pitching record. Giacone, like Ketchie, a lefty, might have deserved a better fate. He scattered four hits over seven innings, striking out seven and allowing no earned runs.

Bryce Butler beat out an infield single to start the third-inning rally. Leadoff man Heath Mitchem walked, but Simpson made the second out on a line drive to center fielder Senter. Shepherd’s ground ball in the hole on the right side was fielded by second baseman Jeremy Whitehead, but his throw to the pitcher covering first base got away, scoring Butler.

Then, with Butts at the plate, Giacone’s wild pitch scored Mitchem and moved Shepherd to third base. Butts eventually struck out, ending the rally, but not before Catawba had its 2-1 advantage.

Catawba outfielder Lee Poteat helped Ketchie out in the sixth inning when NGU’s Utah Jones ripped a single into the right field corner. Jones tried to stretch the hit into a double but Poteat gunned him down, shortstop Simpson taking the throw and making the tag.

Nester started a rally for Catawba in the seventh frame with a two-out single. Butler then walked, bringing up the top of the order in Mitchem. But Giacone was able to deflect a hard shot off Mitchem’s bat to the shortstop, Jones, who threw Nester out at the plate, ending the threat.

The Crusaders managed just three hits during the game against Catawba pitching, but was aided by three walks and three hit batsmen. When North Greenville topped Catawba during the regular season on March 6 in Tigerville, the Crusaders had 17 hits in their 7-6, walk-off victory.

NOTES: Butts and Nestor had two hits each to lead Catawba, but Shepherd’s hit, stolen base and run scored were key in the win. … Butts also had an RBI and two stolen bases. … Shepherd (7-4, 3.60 ERA) will most likely start Game 2 today (4 o’clock) and he has had two straight great outings, one in last weekend’s sub-regional at Newberry. … North Greenville may counter with Tucker Burgess, who is 13-2 (2.27 ERA). … Williams now has 52 strikeouts in 35.2 innings. … Faile’s homer was his 17th for the season. … The D2 World Series is scheduled for June 1-8, at the USA Baseball Complex in Cary, N.C. Catawba advanced to the event in both 2012 and 2015 (national runner-up).