A stellar career, a good ride: ‘It’s not every day you have a Donnie retire’ 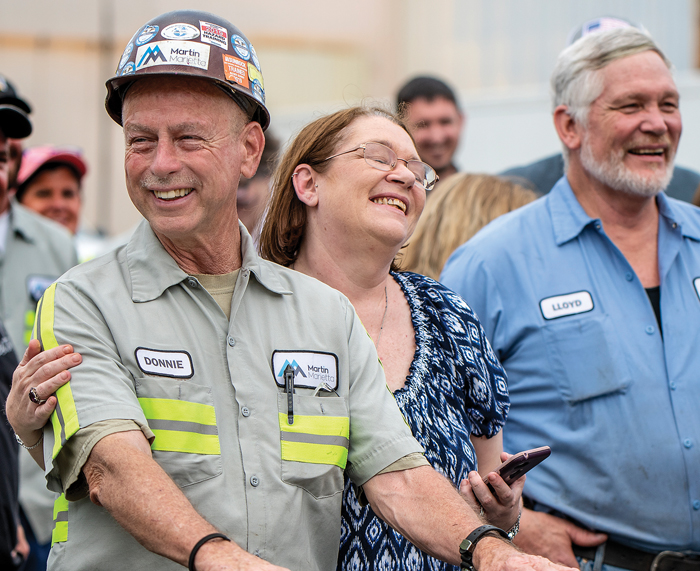 He also has always been fascinated with helicopters.

His co-workers at the Salisbury Shop of Martin Marietta know this about Donnie, so as part of a big retirement luncheon they threw for him Thursday, they arranged for Donnie to have a helicopter ride.

It was all a big surprise for him. Everyone from the shop — along with friends, family and neighbors who were invited guests — gathered in the back lot close to the big trucks Donnie drives.

Donnie was there with them, scratching his head, wondering what was going on. He knew the 75 steaks Tim Shue and others had just finished cooking were waiting to be eaten.

About that time, Dan Moore and his helicopter approached overhead. With everyone craning their necks skyward, especially Donnie, the helicopter banked sharply and glided in for a nice landing on the grass not far away.

It wasn’t long before Donnie was greeting the pilot and looking things over.

“That right there, that 500 Series,” Barger said, heading later for lunch, “that’s the sports car of helicopters.”

Barger’s helicopter flight was scheduled for after the lunch, where several folks shared Donnie Barger stories —and there were plenty of them, given his 46 years of working out of the Salisbury Shop.

Barger started work for Martin Marietta April 2, 1973, before many people now at the shop were born. His final day will be May 31.

More than one person said Donnie would be pretty much worthless the rest of Thursday — and maybe all of his last week — because of his excitement over the helicopter.

Former co-workers used to call Donnie “Lightning,” as a joke and in contrast to his laid-back, slow-and-easy way of doing things. That changed to “Slow Motion,” then it eventually just shortened to “Moe.”

On Thursday, Allen compared Donnie to a turtle in a rabbit’s race — he just keeps going and going, getting things done. Allen said no one else makes the shop employees smile or laugh as much as Donnie.

“Or makes you cuss,” someone chimed in.

Allen added that Donnie is humble, modest and caring and the shop was “graced to have him on our team.”

Donnie Barger grew up in Rowan County and spent his first year out of high school bagging groceries for the Food Town in Rockwell.

Then he went to work as a mechanic for Martin Marietta’s Salisbury Shop, where the big machinery or pieces of equipment are repaired and trucked back to many of the company’s quarry sites across the country.

On Oct. 23, 1978, Donnie officially moved from mechanic to a truck driver for the shop, and the job sometimes took him on long hauls — up to five days — to places as far west as Texas and Oklahoma or as far north as Minnesota.

It was common to be making runs to company sites in places such as Georgia and Indiana or more local runs in which he could be back the same day.

“You meet a lot of people, a lot of good people,” he said.

Donnie said he often heard the question, “You think the Salisbury Shop can fix this?”

His answer always was, “They can fix everything but a broken heart,” though he would add maybe a guy at the shop could do that, too.

The 44-employee Salisbury Shop takes care of some heavy-duty machinery, often relying on a 50-ton overhead crane to move things around. Likewise, the loads for truck drivers such as Donnie can be upwards of 70,000 and 80,000 pounds.

Ron Rutledge, a retired driver who came back for Donnie’s luncheon, said Donnie just seemed to be a natural at the wheel of these heavy hauls. Don Mahaffey, Donnie’s current supervisor, said Donnie’s safety record over 46 years was stellar.

He once suffered a minor cut from a grinder. He had one minor accident in his 40-plus years of driving a truck and never had a traffic citation.

While Donnie never had a lost-time accident, Mahaffey said he thinks Donnie lost plenty of time by stopping at fruit and produce stands on his trips or grabbing a milkshake here and there. He often came back to the shop with bags of produce to share.

When personnel at other sites inquired what truck driver to be looking for, and Mahaffey told them it would be Donnie, they usually asked, “Is he the guy who takes the pictures?”

Donnie has a way of documenting his life with photographs.

There also was a time in summers past, before Martin Marietta required uniforms, that Donnie was accused of looking like television’s Ernest T. Bass character because he would cut off his sleeves to be cooler.

Kidding aside, Mahaffey said someone working 46 years in one place is almost unheard of any longer, and Donnie was dedicated and faithful, willing to answer Mahaffey’s emergency calls early in the morning or over the weekends when things just had to be moved.

At one time, Donnie and fellow truck drivers (now retired) Teddy Miller and James Freeman were known as the three amigos.

“We’ve gotten into a lot of trouble together,” Miller said Thursday, but he added Donnie was a good co-worker and a better friend.

Miller even named a dog after Donnie.

“He’s a great man, I’ll tell you what,” said retired co-worker Jerry Holder. “He helped me a lot.”

Mahaffey told a story reflecting how thoughtful Donnie can be. He and Donnie spent one morning on a tractor and excavator pushing dirt and filling in a 80-foot-by-80-foot settling pond on the shop site.

Toward the end of the work, Mahaffey noticed his wallet was gone, apparently having dropped into the hole they had just filled. The wallet contained $300 cash for Christmas shopping and his credit cards.

While Mahaffey returned to the office to cancel his cards, Donnie stayed behind and prayed, “Please let me find that wallet.”

He hopped back on the excavator, made a couple of passes with the scoop and unearthed Mahaffey’s wallet. “It shook Donnie up,” Mahaffey recalled. “The Lord had answered his prayer.”

Neighbor Bill Shive said people usually have many friends but only a few they consider special. Donnie Barger is one of those for Shive.

“There’s not but one Donnie,” Shive said. “Everyone knows that. I love ol’ Donnie to death.”

Kristen and Donnie Barger have been married 26 years. “He made me laugh,” she said of their early days dating. Some years back, they fell into the rescuing and showing of dogs and trained some as service animals.

The Humane Society often brings dogs to them for care and boarding until homes can be found. At present, Donnie estimated they have 12 or 13 dogs at their house.

His favorite dog of all time was Cody, an Alaskan malamute who showed up one day at the shop, made friends with Donnie, and the two were best pals until Cody died.

Donnie and Kristen are planning to do some serious farming once he retires.

“I’m ready to see him come home and pursue a passion with his farm,” Kristen said. “… Being a truck driver’s wife was kind of lonely.”

As a gift, Martin Marietta pays retirees $25 for every year they’ve worked, so Donnie received $1,150 Thursday. “You can buy a lot of dog food,” a friend shouted out.

When the luncheon was over, everyone moved toward the helicopter.

There was some quick pre-flight instructions with Moore before Donnie donned headphones, gave a thumbs up and took to the sky. But first Donnie walked around the bird, taking photographs.

No one was surprised.

Carl Spencer wood carvings among many attractions for Helen…