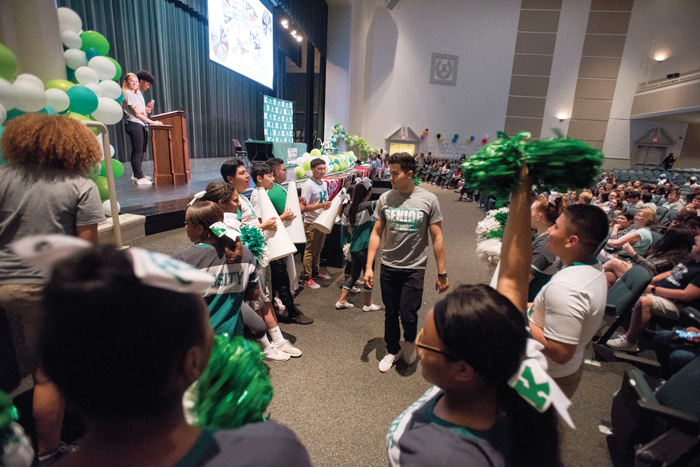 JON C. LAKEY/SALISBURY POST Saul Lemus walks to the stage to sign his certificate. Soon to be graduating seniors at A.L. Brown High School in Kannapolis gathered together in the school's performing arts center to celebrate the future of their education. Students that are continuing their education in college were giving the opportunity to be recognize of their intentions by ceremonially "signing" a certificate of intention to attend a school that hey were accepted to attend after graduation. Kannapolis, NC 5/23/19

The number, representing  35% of the school’s 340-member graduating class, was not a record-setting percentage of talented young sportsmen and women. The signing was open to all college- and career-bound members of A.L. Brown’s class of 2019 — regardless of athleticism.

Thursday’s event gave opportunity for seniors, friends, family and faculty to celebrate student acceptance into two- or four-year schools, trade schools, apprenticeships or enlistment in the Armed Forces. It was the second annual “Senior Signing Event” held at the school.

According to Michele Pitts, AIG and AP Academy coordinator at the school, the 120 participants represented only a portion of the school’s learners headed into college, training or careers. Students had the option to participate in the ceremonial signing event.

During Thursday’s event, students signed certificates of commitment to their individual schools, posed with college flags for photos and a chance to ring A.L. Brown’s coveted bell: a railroad bell won during an annual “Battle for the Bell” game against Concord High School.

The bell represents A.L Brown and Concord’s rivalry — the 15th oldest in the nation and the longest in the state of North Carolina.

A.L. Brown has maintained hold of the bell for four years, meaning the 2019 graduating class will have maintained its possession during their entire high school experience.

According to juniors Jillian Brim and Ryan Cuthbertson, emcees of the celebration and two of a five-member team of planners, the many facets of the event were an effort to bring about the best experience for graduates.

“We really tried to put ourselves in their shoes and think about what we would want to see if we were graduating today and try to make that happen,” said Cuthbertson. This included baby pictures of each participant lining the walls, “reminding us of where we come from,” he said.

For students in attendance, the celebrated journey into college or career was shaped by opportunities provided by the Kannapolis City Schools high school.

Curtis Brown participated in the school’s Navy JROTC program and on Thursday publicly signed his commitment toward enlisting in the Navy. He said he will pursue becoming a master at arms.

“I’ve always been inspired by the Navy, and I like the law enforcement part of it,” he said. “I want to join the K-9 unit they have.”

Makenzie Davis will head to the University of North Carolina at Charlotte in hopes to remain close to a project she began as an A.L. Brown student, she said. She has worked for two years with carpentry teacher James Busse to bring to life “Knight Haven,” a housing and therapy opportunity for veterans.

Together with other students, she has seen to the creation of three small, temporary shelters for veterans, which will be located on property donated by Wisdom Way, a horse rehabilitation center.

The center will one day provide horse therapy to help with effects of serving in the Armed Forces, such as PTSD.

“I was going to go to Appalachian,” she said. “After this took off, I don’t want to leave it behind after I graduate. I want it to be something I grow with as I go on.”

For student Julian Robles, his career aspirations were heavily influenced by his own personal health struggles. Last year, he was diagnosed with diffuse large B-cell lymphoma, undergoing months of chemotherapy before being declared cancer-free earlier this year.

“I knew one thing even though my life may be put on a pause, life around me doesn’t. Even in the hospital beds and all that I would be filling out college applications doing school work, keeping in touch with all my teachers,” he said. “Even though I was down, I still had to pick myself up and do everything because it’s not going to stop.”

The whole experience shaped who he’s going to become, he said: on Thursday, he  signed a commitment to the University of North Carolina at Chapel Hill, where he will begin his studies to become an oncologist.

Robles said Thursday’s signing ceremony was “a nice way to commemorate everybody.”

“All the work that you put in, something good will come out of it,” he said, and Davis agreed.

“It’s a lot of fun because you get to see where everybody’s going, what they’re pursuing,” she said. “It’s great to be able to celebrate it like an athlete signing day. This usually doesn’t happen for the rest of us.”