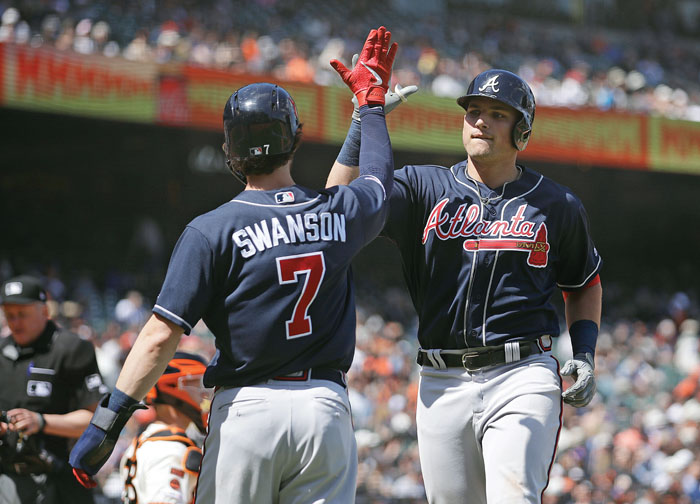 SAN FRANCISCO (AP) — Austin Riley has been at the center of Atlanta’s recent power surge and did it again with his fifth home run in nine games to set a modern-day franchise record.

Riley hit a game-tying home run in the eighth inning then drove in the go-ahead run in the 13th with a two-out single off Reyes Moronta, lifting the Braves to a 5-4 victory over the San Francisco Giants on Thursday.

“That was a great at-bat,” Braves manager Brian Snitker said. “It was a great approach by him. He’s been very impressive so far.”

Atlanta hit eight home runs in the four games with San Francisco, the most the Braves have hit in one series at the Giants’ waterfront ballpark. They hit seven in a four-game series at Oracle Park in 2012.

Riley had three in this series. The 22-year-old became the fastest player in Braves history during the live-ball era to hit his first five home runs.

“That’s cool,” Riley said. “To be able to do that is an honor. The last hit was even more special to me because it put the team ahead and got the job done.”

Riley already had one hit before his two-run homer off Tony Watson with two outs in the eighth.

The Braves had only one baserunner over the next four innings before Dansby Swanson singled against Moronta (1-4) leading off the 13th. After Freddie Freeman flew out, Swanson stole second base. One out later, Riley lashed a single to right field and Swanson scored easily.

Riley and Ozzie Albies both had three hits for Atlanta and Tyler Flowers homered. The Braves have won 10 of 13.

“Mentally he’s in a good spot,” Flowers said of Riley. “He’s into his approach, he trusts himself. He doesn’t panic on pitches in, out, up, down. He doesn’t let that dictate what he’s trying to do.”

Luke Jackson (3-1), who blew his fourth save on Tuesday, retired six batters to win. The Braves closer called Riley “a human cheat code” and said the rookie has made a quick impression on his teammates.

“You expect it now,” Jackson said.

San Francisco got the tying run on base with one out in the bottom of the 13th but Jackson struck out Mac Williamson before third baseman Josh Donaldson made a barehanded grab on Donovan Solano’s short chopper, throwing to first for the final out.

Atlanta’s win overshadowed a strong outing by Giants starter Madison Bumgarner. The big lefty allowed two runs on six hits, walked two and left with a 4-2 lead. Bumgarner has a 2.12 ERA in nine games against the Braves since his last loss to them on Aug. 25, 2012.

Will Smith’s swinging strikeout of Charlie Culberson leading off the ninth was the left-handed reliever’s 11th consecutive out to come via strikeout, a San Francisco record.

Williamson was hit by a pitch in his first at-bat then struck out the next five times he came to the plate. “Maybe I can go talk to Riley a little bit and get his opinion and get some pointers from him,” the Giants left fielder said.

WATCH OUT FOR THE BIRDS

Riley got his first look at the seagulls that soar over Oracle Park late in games. “Stuff’s coming out of the air and I’m like, ‘I gotta get out of here,’” Riley said. “It was a lot of birds. There was a foul ball that almost hit one.”

It was the third time in franchise history — dating to their days as the Washington Senators — and second time this season the Twins homered eight times. Before doing it April 20 against Baltimore, the last time it happened was in 1963 against Washington.

Schoop drove in four runs and Sano three as the Twins won six of seven on their trip that began in Seattle and wound up with their first sweep in Anaheim since 1996.

BALTIMORE (AP) — Mychal Givens walked Aaron Hicks with the bases loaded to force in the tiebreaking run in the ninth inning, and New York completed a four-game sweep of Baltimore.

Clint Frazier and Luke Voit homered for the Yankees, who went deep 13 times in the series.

CLEVELAND (AP) — Ryan Yarbrough handled Cleveland’s lineup into eighth inning in his first start this season and Kevin Kiermaier legged out a three-run, inside-the-park homer when two outfielders collided in the win for Tampa Bay.

Gómez’s first homer of the season came off Wander Suero (1-4) as the Mets completed a four-game sweep.

The Pirates jumped on Rockies starter Antonio Senzatela (3-4) for eight runs over 3 1/3 innings, but Colorado stormed back in the sixth, plating six runs that were charged to Pittsburgh starter Jordan Lyles (5-1).

CHICAGO (AP) — Jean Segura and J.T. Realmuto homered off Jon Lester, and Philadelphia beat Chicago for a split of the four-game series between division leaders.

Pearce went 3 for 5. He singled in the fourth and sixth innings and hit a two-run shot off Ryan Feierabend in the ninth, his first of the season.

Rafael Devers had two hits, two RBIs and scored twice as Boston improved to 11-3 in its past 14 road games.

The struggling Blue Jays lost for the third time in four games.

Weber (1-0) allowed one run on three hits, walked none and struck out four.

Toronto’s Sam Gaviglio (3-1) allowed four hits, two earned runs and struck out one in the loss. Justin Smoak hit a solo homer in the ninth.