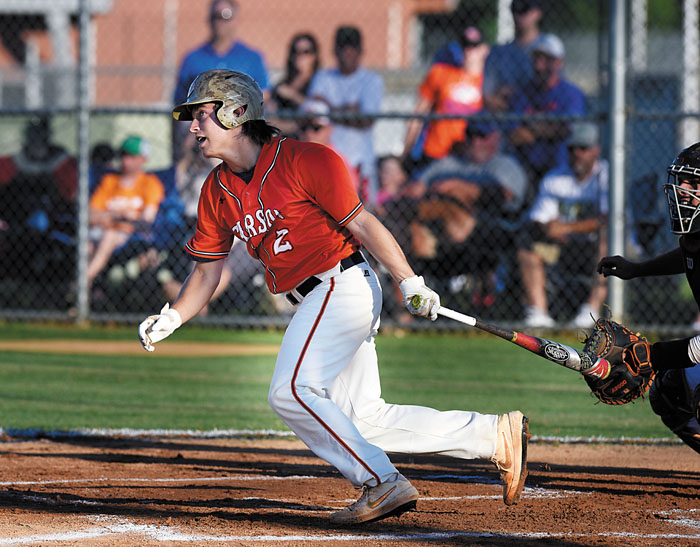 Wayne Hinshaw file photo/for the Salisbury Post ... Carson’s Cole Hales, shown in Tuesday’s home win against Marvin Ridge, connected for a big two-run double on Thursday night in Waxhaw, as the Cougars tried to rally in Game 2 of the 3A Western Regional best-of-three series. The Mavericks won, 6-5, to even the series at 1-1.

The Mavericks dominated for six innings, but Carson made things tense at the end in the second game of the 3A Western Regional baseball championship series on Thursday night.

With the help of a five-run first inning, the 10th-seeded Mavericks won, 6-5, against top-seeded Carson.

Marvin Ridge (26-6) tied the best-of-three series at one game apiece. The teams will play the deciding game at Carson on Saturday at 7 p.m., with the winner moving on to the state championship series against Wilmington’s New Hanover High or Greenville’s D.H. Conley. That series also is deadlocked at 1-all, after Conley romped to a 10-0 victory on Thursday.

Carson (28-3) scored first in Game 2, with Luke Barringer drawing a walk and scoring from first base on Logan Rogers’ double.

But a long bottom-of-the-first put the Cougars in a hole. Marvin Ridge used five singles, two walks and an error to take a 5-1 lead. Four of those runs were unearned.

Carson starter Deacon Wike settled down after a rocky first inning. He kept the deficit at 5-1 until Marvin Ridge added on what would prove to be a big run in the sixth inning, taking a 6-1 lead.

Carson made its comeback bid in the top of the seventh frame. With one out, Jake Harris and Garrett Alewine walked. Dylan Driver grounded a single through the left side to load the bases.

No. 9 hitter Ryan Street walked to force in a run, and the Cougars were back to the top of the lineup and McKernan’s night was over.

Cole Hales greeted reliever Drew Cognac with a double to the center-field fence to score two runs. Carson was down by only 6-4.

With runners at second and third, Marvin Ridge elected to walk Barringer intentionally to fill the bases, even though he was the go-ahead run.

That strategy paid off. Logan Rogers bounced into a fielder’s choice. A run scored, but Marvin Ridge got the all-important second out.

Then Cognac struck out CP Pyle to end the contest.

The Cougars will rely on Aaron Misenheimer, Street and Rogers on the mound in Game 3.

A boxscore is in today’s Scoreboard.