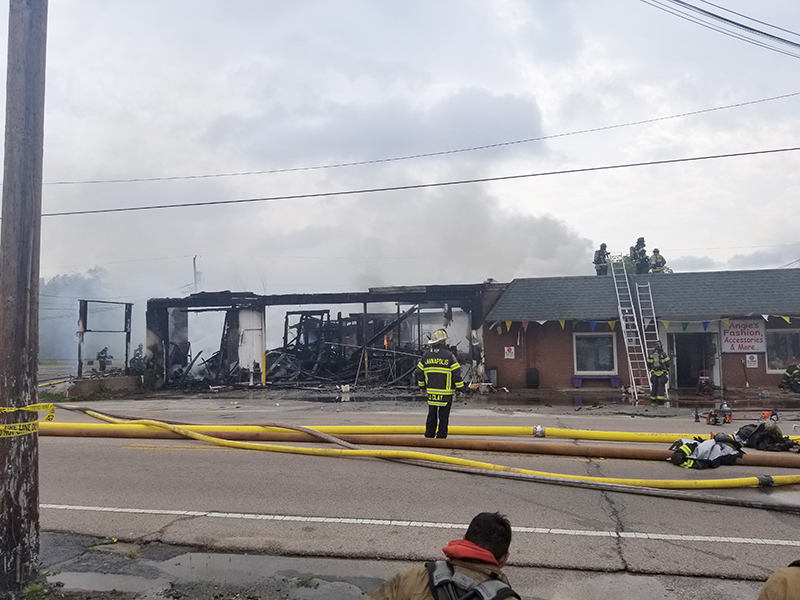 Photo submitted - Smoke rises from a former appliance store on South Main Street in Kannapolis Thursday. One firefighters was injured in the blaze and the store was deemed a total loss.

KANNAPOLIS — One firefighter is injured and a former appliance repair store at 915 S. Main St. is a total loss after a Thursday morning fire.

At 9 a.m. Thursday, the Kannapolis Fire Department received a call about a fire on South Main Street in Kannapolis. Firefighters arrived to find the one-story building in flames.

While fighting the blaze, firefighter Steven Tilley was injured by debris from a ceiling. He was taken to the hospital, where he was scheduled spend the night for observational purposes.

By mid-afternoon, firefighters were still working to extinguish hotspots. Neighboring clothing store Angie’s Fashion, Accessories and More, was significantly damaged before the fire was contained, and a portion of the ceiling collapsed.

The fire closed portions of Main Street between Bethpage and Rogers Lake roads until 3 p.m.

Norma Delgado, whose husband owned the Deltor Inc. Automotive Sales lot across the street from the fire, said she’d seen smoke on her way in from China Grove to open the business.

“I thought, ‘Wow, it’s kind of early for someone to be burning wood,'” she said. “Then when we got closer, I saw it was more impacted, strong and dark and flaming. When we parked, the building was going up in a blaze.”

Delgado remembered the burned business as an active thrift shop, selling furniture and clothing items — something akin to a “small department store,” she said. Like Angie’s recent opening, she said the other operations in the strip were less than a year in existence — eight months for the Main Street Business Center and less for the others.

“They were just trying to survive and make a living,” she said. “I feel bad for them.”

The Deltor Inc. used-car lot was minimally damaged by the heat of the fire, with some warping occurring in the building’s vinyl siding.

It was a first for the word-of-mouth business’ 16 years of operations, she said, adding that she was thankful the fire was contained before it spread across the street.

“We have gas in these cars, can you even imagine?” she said. “It’s unfortunate that we’re another couple of businesses down, but at least nobody got hurt more than they did.”