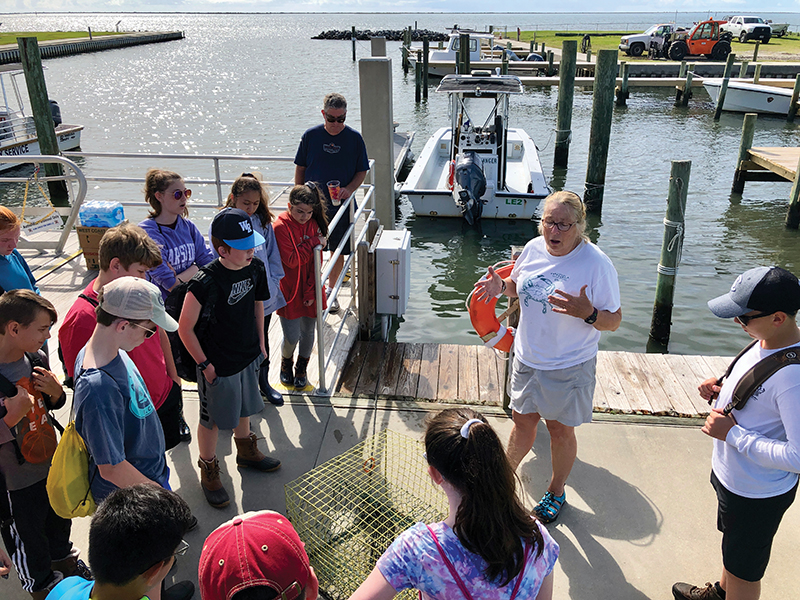 The class visited the North Carolina Aquarium at Pine Knoll Shores for a behind-the-scenes tour on the first day of their trip. Students learned how biologists work to save turtles that nest on the Carolina coast, watched the shark tank feeding, and learned about how aquarium workers help clean the Bogue Sound.

The next day, students learned about the ecology and history of North Carolina’s barrier islands and lighthouses during a five-hour ocean studies tour of Shackleford Banks and Cape Lookout National Seashore.

The class took a detour on the way home at Fort Macon, where the park superintendent taught them about the history of the fort and about how muskets work.

The Department of Teacher Education honored graduating seniors as West Scholars at its end-of-year celebration.

This year, six seniors were recognized as West Scholars. The Academy for Teaching awards the West Teaching Scholarship to students in the education field with a GPA of 3.4 and a combined SAT score of 1170 RSAT or a 24 on the ACT. The scholarship is up to $5,000. 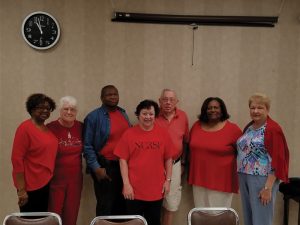 Submitted – Members of the Rowan Retired School Personnel meet at Rufty-Holmes Senior Center in May.

Swanger described the many activities and classes available there for seniors in Rowan County. Not only are there a multitude of choices in programs, but many are free.

Several members had participated in the regional North Carolina Retired School Personnel meeting on Tuesday in Matthews. Local member John Hoffman is outgoing co-director of the region and local President Lila Bostian was elected secretary for the region for 2019-2021.

In addition to committee reports, the meeting included an announcement that invitations to next year’s first meeting were included in gift bags and would be given to retirees at the Rowan-Salisbury Retiree Banquet on May 16.

Several members will be attending the North Carolina Retired School Personnel Leadership Training on June 5 at the Rowan-Cabarrus Community College south campus. Also, a $1,000 scholarship will be presented to a 2019 graduate from South Rowan High School at the schools’ awards ceremony May 24.

All retired school personnel are invited to join North Carolina Retired School Personnel, a division of the North Carolina Association of Educators and the National Education Association. The next meeting will be Wednesday, Sept. 18, at Rufty-Holmes. All meetings are at 10 a.m., the third Wednesday of odd numbered months except July. For more information, email Lila Bostian at lila.bostian@gmail.com.

JD Tysinger, a rising seventh grader at North Hills Christian School, will host a free “Living with Food Sensitivities” event on Monday, May 27, at 5 p.m.

The free seminar, held at the Courtyard by Marriott Conference Room at 120 Marriott Circle in Salisbury, will provide a review of symptoms and diagnoses, restaurant and cooking hacks and free samples for the first 25 guests.

Tysinger is holding the event as part of his community service hours with a hope to help educate the community on how to live with food sensitivities by opening up on his personal journey. Guest speaker, Dr. Christopher Magryta with Salisbury Pediatrics, will be speaking on symptoms and diagnosis.

For more information, search for the Living with Food Sensitivities event on Facebook.

The seventh scholarship, valued at $1,000, was awarded in memory of Curtis Graham. The Graham Family Scholarship honored Graham in his dedication to the Millbridge Ruritan Club. He was a founding member of the club as well as the organizer of the scholarship program for many years. His son, Larry, was a member of the club for many years as well. This year’s winner is Katherine Morgan from West Rowan High School.

The eighth scholarship, valued at $1,000, was awarded in memory of Ann White. White was a vital member of the Millbridge Ruritan Club for many years. She lost her battle with cancer four years ago and is remembered for her caring and compassionate gifts to the club and community. This year’s winner is John Lee who is homeschooled in the Back Creek community of western Rowan County.

Smith spoke about her career in nutrition and what it is like to work in the grocery retail industry, leading an interactive nutritional session for nearly 100 students ranging from pre-kindergarten to fifth grade. The session highlighted the importance and benefits of healthy eating.

To illustrate how whole fruits and vegetables can be used to create other food products, Smith brought along a bag of Food Lion apples, a jug of Food Lion 100% apple juice, and a box of Food Lion Apple Dapple cereal.

“I used these items to show the kids how a really healthy, whole food can change in appearance and composition as they are processed,” said Smith. “For example, I asked them to think about what is left behind when you squeeze apple juice from fresh apples.”

While apple juice is still a nutritious choice, it holds less nutritional value than whole apples. Juice can also contain much more sugar than a standard piece of fruit because the sugars are more concentrated in juice than a whole fruit.

Smith also used the Food Lion products to explain the Guiding Stars program, an initiative that ranks each product with one, two or three stars based on its nutritional value with objective criteria to help people make informed choices as they shop.

Students were eager to learn and asked plenty of questions about her job, grocery retail and nutrition. Smith has been invited back to speak to specific classes later, and she looks forward to the opportunity to share more with the children.