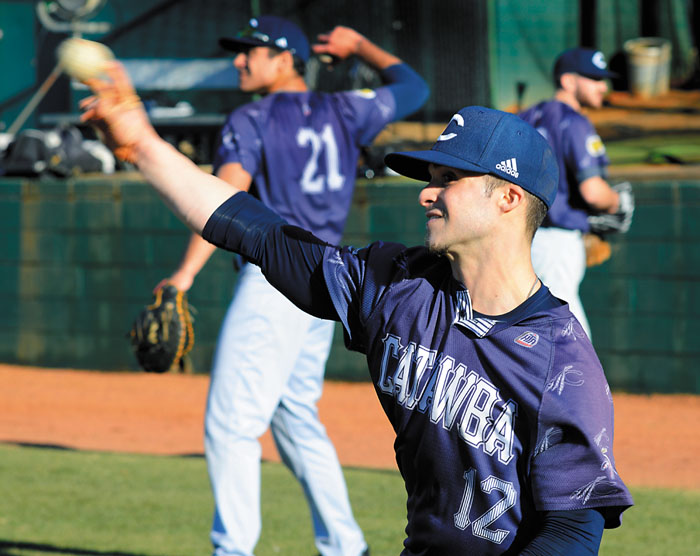 Wayne Hinshaw file photo/for the Salisbury Post ... Infielder Mike Manoogian, shown throwing before a practice in 2018, joins fellow senior Zack Queen as players who “set the culture for everything that’s good about Catawba baseball,” according to coach Jim Gantt.

There’s a smile on every face, starters and back-ups alike.  These are good times for the Catawba Indians, who are preparing for Friday’s Game 1 of a best-of-three series at North Greenville in the Southeast Region’s inaugural “Super Regional.”

Catawba tied for third in the South Atlantic Conference regular season standings, shocking stuff, but that’s in the past. This is a confident, loose team — with good reason. Catawba (45-12) has won 11 in a row heading into Friday’s road game and just roared unblemished through the mine field of the SAC Tournament in Kodak, Tenn., as well as the opening phase of the regional at Newberry.

“We got (second baseman) Joe Butts back from an injury (on April 23),” Gantt explained. “He’s made a few errors and I’m not sure he’s had a tremendous amount of hits, but he’s just one of those special guys. When he’s in the lineup, we play better. Statistics, analytics, they don’t tell everything. Butts has got some intangibles.”

Catawba has a roster loaded with intangibles. Gantt says Zachary Andrew “Zack” Queen and Mikael Hrant “Mike” Manoogian, two veterans who don’t play a lot, have been as important as anyone for the Indians’ success.

“They’re mature,” Gantt said. “The way they carry themselves when we’re on the road, the way they act in a hotel, they set our reputation. They create the right environment, set the culture for everything that’s good about Catawba baseball.  Those two carry a lot of clout with their teammates, more clout than any of the coaches have.”

Manoogian is 23, while Queens turns 23 next month. Both officially became college graduates on May 11. Both were stellar students at Catawba and earned degrees in business administration. Both were on the Dean’s List almost as often as they have been in the starting lineup.

“They’re smart guys in the classroom and on the field,” Gantt said.  “Queen already has a job  (as a financial representative with Northwestern Mutual in Charlotte). He’s bi-lingual, and I’ll predict he’s going to make it big in finance. Newman Park might be Zack Queen Stadium some day.”

Manoogian’s game plan is to return home to New Hampshire after Catawba’s season ends. His goal is to become a Navy S.E.A.L. There are military people in his family, and he’s had S.E.A.L. aspirations since he was a youngster.

Manoogian, like most New Englanders, is a huge Boston Red Sox fan. That leads to some back-and-forth banter with Queen, who roots for the New York Yankees.

Besides being fans of the game, Queen and Manoogian are ball players, good ones.

Like most of their Catawba teammates, they were standouts in high school. Queens was a star catcher and slugger at Lake Norman Charter High in Huntersville, while Manoogian was good enough in New Hampshire that he was on the team at La Salle University for a year before he came to Catawba.  Former Catawba player Scott Searles, a Boston native who became a coach, recommended Manoogian to Gantt.

“Searles said  Manoogian played the game the same way he did, and that meant every day was the seventh game of the World Series,” Gantt said. “How could you not want a guy like that? I’d never seen Manoogian play, but we took him. We’ve never regretted it.”

Queen and Manoogian both experienced surgeries that set them back. There was labrum surgery for Queen and knee surgery for Manoogian. It can be a fine line between starting and being on the bench, and those injuries may have made the difference for both of them.

“I love baseball, so obviously I want to be playing  every game,” Manoogian said. “But once I got to Catawba I never thought about leaving or transferring over playing time. That would have been like quitting, and that’s not me.”

Queen and Manoogian want to play, hope to play and prepare to play, although most days they don’t.

“I always look at the lineup card — every day,” Queen said. “I still get a little ticked off if I’m not in the lineup, but I never let that put me in a bad mood. I try to stay locked in and try to stay positive every day because I’ve still got a job to do. I have to be ready to pinch-hit and I have to support my teammates. Negativity can resonate in a dugout, and there’s not going to be any negativity coming from me.”

When Catawba played Belmont Abbey on April 17 at Newman Park — Senior Day — Queen made his second start of the season and had two hits in a 9-6 victory. One of his singles came in front of a homer by Morrison. Manoogian made his only start of the season. He got on base twice. He’s feisty. Both times he was hit by pitches. He scored a run on a Jeremy Simpson double.

Queen has started only four games in his career, but he’s played in 31, frequently as a pinch-hitter. He’s 8-for-22 this season.

Manoogian has played in 33 games for the Indians, with seven career starts. He’s 3-for-8 this season.

“Both of us know that there are other schools where we would’ve played a lot more, but Catawba baseball has been a great experience,” Queen said. “The relationships you build in college are deep and the friendships that you make with your teammates and coaches are life-long. As far as friendships and relationships, it would be hard to beat what we’ve gotten at Catawba.”

They practice hard and on game days, Queen and Manoogian stay busy. Gantt says they are like assistant coaches. They know a lot. They see a lot. They hold their teammates accountable.

“We keep a lot charts and gather as much helpful information as we can,” Queen said.

On Wednesday, as practice comes to a close, Manoogian stares wistfully out at the green grass and green walls of Newman Park, knowing that this chapter of his life is about to slip from reality into precious memories.

“We’ve won a lot of championships,” Manoogian said. “We haven’t played a lot of games lately, but the coaches have done a good job of keeping all of us sharp. Especially since school ended, we’ve been able to put all our focus into baseball. We can win some more games.”

These are the last days of Catawba baseball for senior starters Heath Mitchem and Jacob Nester, and for Riley Myers, who will be heading to graduate school at Wake Forest University next year and will have a chance to play his last season of eligibility for the Demon Deacons.

These are also the final days for Queen and Manoogian.

Leaders come in all shapes and sizes. Sometimes they’re the guys who hit the home runs and pitch shutouts, but sometimes that leadership comes in more subtle ways.

“We’re going to miss those two guys next year more than anyone realizes,” Gantt said. “You hear a lot of horror stories these days about bad teammates, but they have been great ones. We’re not where we are now without them. It’s guys like Queen and Manoogian who keep me doing this.”