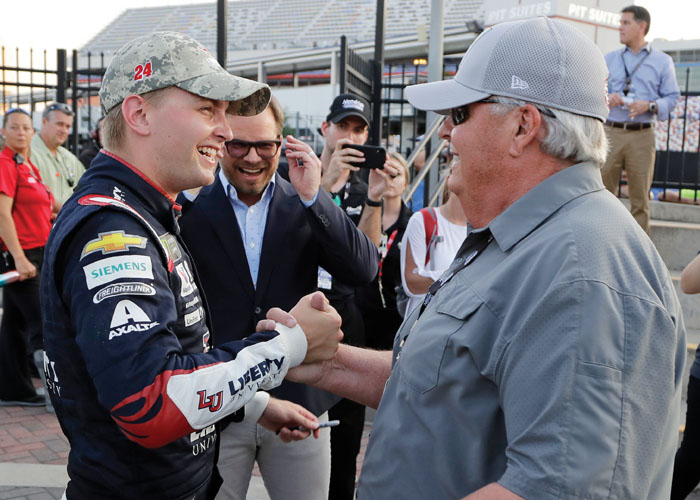 Rick Hendrick, right, is among those who believe motorsports pays off in trying to get customers in to buy cars. (AP File Photo/Chuck Burton)

CONCORD (AP) — The hometown kid is starting out front in NASCAR’s longest race.

Charlotte native William Byron became the youngest driver ever to capture the pole for the Coca-Cola 600. The 21-year-old Byron, who grew up a short drive from Charlotte Motor Speedway, turned a lap of 183.424 mph in his No. 24 Chevrolet on Thursday night.

Aric Almirola will start alongside Byron on the front row in his No. 10 Ford. It is one of six Fords starting in the top 10.

“I grew up in Charlotte and I came to this race every year, so it’s a dream come true to qualify on the pole,” Byron said. “This is pretty cool. I can’t think of a better way to start the weekend.”

Byron downplayed being the youngest pole-sitter in the race, saying he doesn’t view himself as young but rather as a “race car driver like everyone else.”

Byron has six top-10 finishes in 49 career Cup Series starts, but is still looking for his first win. He’s hoping to follow in the footsteps of Kyle Busch, who won the Coca-Cola 600 last year starting from the pole. Busch will start third this year, followed by 2017 winner Austin Dillon and 2011 and 2013 champion Kevin Harvick.

At the very least, Byron is hoping things go better than they did last year in his inaugural appearance in the Coca-Cola 600. Byron struggled in 2018, qualifying 21st before finishing 39th after crashing.

“That was miserable,” Byron said.

He won’t have to deal with slower traffic this time around starting from the pole.

Byron has been qualifying well with new crew chief Chad Knaus, who is no stranger to winning at Charlotte Motor Speedway.

“That No. 1 pit stall will pay dividends later in the race for sure,” Byron said.

Kevin Harvick finally got a chance to run a qualifying lap at the Coca-Cola 600 and will start fifth on Sunday.

That’s much better than last year when Harvick never got on the track after failing pre-race inspection three times. Car chief Robert Smith was ejected, and Harvick will have to sit out the first 30 minutes of practice Saturday.

“This is the trophy you get when you win the Coca-Cola 600, but this is not the inscription you get on the trophy. This will be something I cherish forever,” said Waltrip, whose special trophy includes a nod to each of his 600-mile wins and a thank you for his contributions to NASCAR.

JOE GIBBS SAYS SUCCESS ALL ABOUT FINDING THE RIGHT PEOPLE

CONCORD (AP) — When Joe Gibbs decided to venture off from the NFL and form a race team in 1992 he was scared.

Gibbs had won three Super Bowls as coach of the Washington Redskins, but he was an outsider starting from scratch when it came to stock car racing. And when his team failed to win a race in its first season, Gibbs started to doubt his decision.

“That first year I said, ‘Oh, my gosh, are we in something over our heads here?’” Gibbs said.

But Gibbs, just as he always seems to do, found a way to win — and he hasn’t stopped winning.

His tension was eased when Dale Jarrett won the Daytona 500 for Joe Gibbs Racing in the first race of the 1993 season. Gibbs called it a “statement win” for his organization.

“After that win I just kind of relaxed,” Gibbs said. “… I was scared (before) but after that win, relaxed a lot. We said we just need to go to work.”

Gibbs went to work building a powerhouse race team that has won 164 Cup Series races and four championships over nearly three decades, culminating in his selection to the NASCAR Hall of Fame on Wednesday night. He’s done it with drivers such as Jarrett, Tony Stewart, Bobby Labonte, Kyle Busch, Denny Hamlin and Martin Truex Jr. Fittingly, Stewart and Labonte were both voted into the Hall of Fame along with Gibbs.

The 78-year-old Gibbs, also a member of the Pro Football Hall of Fame, said NASCAR is similar to the NFL in that as a leader you’re only as good as your players.

“You are looking for gifted people when you are a coach or the owner of a race team and there are very few guys that can fit that bill,” Gibbs said.

Joey Logano, who once raced for Gibbs, agreed.

“It’s all about people when it comes to this level and he has done a great job of finding great talent, putting them together, and he sees success because of that,” Logano said. “Obviously there are parts and pieces that go along with that. But we can all buy parts and pieces, someone has to run the machine.”

Busch said Gibbs not only has the ability to find the right people, but to keep them.

He said at the annual Joe Gibbs Racing company Christmas party there are often employees who receive awards for 20 or 25 years of tenure.

“It’s pretty special that he has been able to have that allure, the camaraderie and the chemistry within the organization to keep people there forever,” Busch said. “If you treat people right, then they want to stay. And that comes from the top.”

His Toyotas have been dominant this season, winning seven of 12 races heading into NASCAR’s crown jewel race this weekend, the Coca-Cola 600 at Charlotte Motor Speedway. Busch has won three races and Hamlin and Truex have each won two.

For Gibbs it has been a labor of love.

He fell in love with racecars when he was 16 years old. His sons, JD and Coy, apparently inherited that racing bug, too.

“They said to me, ‘Dad I would rather do something in racing’” than football, Gibbs said. “For us to step into NASCAR, think about that, a football guy and I walked into NASCAR.”

Now he’s a Hall of Famer in both sports —with no regrets about the move.

“Our family loves it and wants to be in it forever,” Gibbs said of auto racing. “This is what we want to do. It’s a thrill for us.”