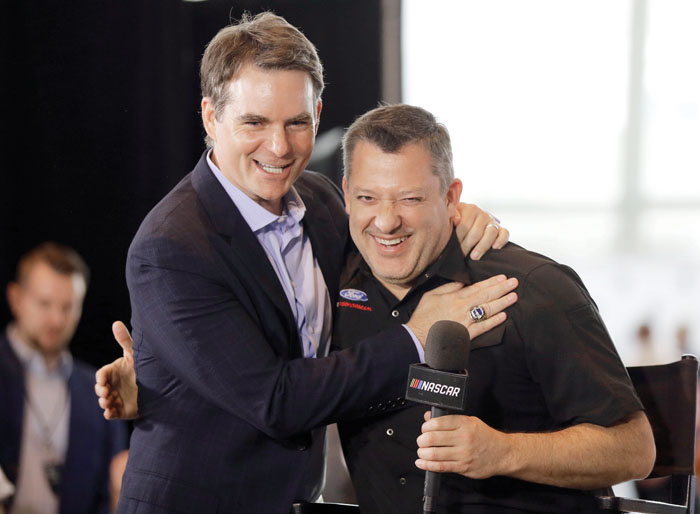 Tony Stewart, right, is congratulated by Jeff Gordon after being named to the NASCAR Hall of Fame class of 2020 during an announcement in Charlotte, N.C., Wednesday, May 22, 2019. (AP Photo/Chuck Burton)

CHARLOTTE (AP) — Tony Stewart headlined a Joe Gibbs Racing trio that was elected to the NASCAR Hall of Fame on Wednesday.

Fox announcer and former NASCAR Hall of Fame inductee Jeff Gordon knew Stewart was “a lock” to get into the hall, but added that it’s only fitting that Gibbs and Labonte will join him in the same class.

“One wouldn’t have happened without the other,” Gordon said.

Stewart won 49 Cup Series races during his 17-year NASCAR career, including championships in 2002 and 2005 driving for Gibbs and another in 2011 with Stewart-Haas Racing. He won another championship as an owner in 2014 with driver Kevin Harvick. Labonte won the Cup Series title in 2000, giving Gibbs the first of his four championships at NASCAR’s highest level.

Even though he no longer races on the Cup Series, the 48-year-old Stewart’s thirst for racing continues: The Indiana native is scheduled to spend four days this week racing sprint cars in four different states. Gordon called Stewart a “modern day A.J. Foyt” for his love of racing all different kinds of cars.

Stewart broke onto the NASCAR scene by winning three races as a rookie. He won on every style of track from road course to ovals and won the Brickyard 400 at Indianapolis Motor Speedway.

Stewart became a team owner in 2009, partnering with Gene Haas.

His championship in 2011 was one for the ages: He won five of the 10 playoff races – including the season finale – to claim his third title by virtue of a tiebreaker over Carl Edwards.

The 78-year-old Gibbs was selected to the Pro Football Hall of Fame in 1996 after leading the Washington Redskins to three Super Bowl titles. Known as a master motivator, Gibbs’ 157 Cup Series owner wins rank third all-time. They include three Daytona 500 victories and five Brickyard 400 wins.

“Joe is a staple in the Toyota family, believing in our NASCAR vision since partnering with Toyota in 2008,” Wilson said. “As the first person ever to be both a Pro Football Hall of Famer and NASCAR Hall of Fame inductee, we can all attest that there is no one more deserving.”

Labonte joins his brother Terry Labonte in the Hall of Fame. He got his first break as a full-time Cup Series driver at 28 in 1993 and went on to win 21 races, including the 2000 title. He is also one of 27 drivers to win a race in all three of NASCAR’s national series.

At 6-foot-6, Baker was known as the “gentle giant.” He won 19 Cup races, including the Daytona 500 in 1980 with an average race speed of 177.602 mph — a track record that still stands. He was also the first driver to eclipse the 200-mph mark on a closed course while testing at Talladega Superspeedway.

Wilson’s engines helped some of the greatest drivers in history. He helped NASCAR Hall of Famers David Pearson, Edward “Fireball” Roberts, Bobby Allison, Cale Yarborough and Darrell Waltrip pile up 109 wins and 123 poles among them.

Edsel Ford was selected as the Landmark Award winner for his contribution to NASCAR.