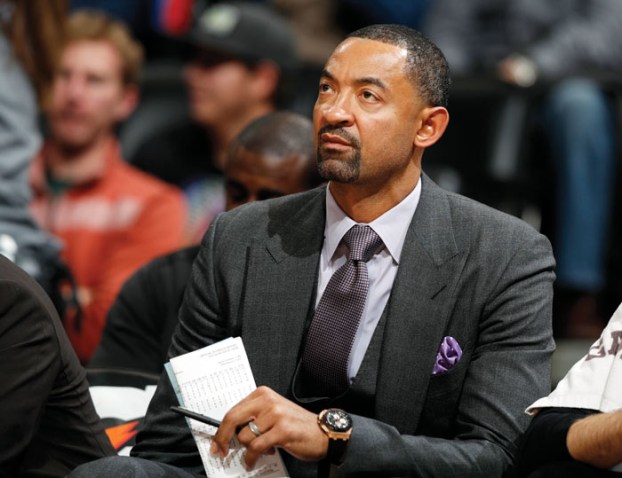 FILE - In this Nov. 30, 2016, file photo, Miami Heat assistant coach Juwan Howard watches during the second half of the team's NBA basketball game against the Denver Nuggets in Denver. A person with knowledge of the situation tells The Associated Press that Howard has agreed to a five-year deal to take over as Michigan men's basketball coach. The person spoke on condition of anonymity Wednesday, May 22, 2019, because the announcement had not been made. (AP Photo/David Zalubowski, File) 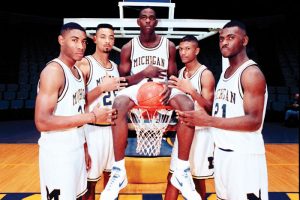 FILE – In this November 1991 file photo, Michigan’s Fab Five, from left, Jimmy King, Juwan Howard, Chris Webber, Jalen Rose and Ray Jackson pose in Ann Arbor, Mich. Howard is coming back to Michigan.
The former member of the Fab Five agreed to a five-year deal, which will pay him $2 million in his first year, on Wednesday, May 22, 2019, to lead the Wolverines. (AP Photo, File)

By LARRY LAGE AP Sports Writer
ANN ARBOR, Mich. (AP) — Juwan Howard is coming back to Michigan.
The former member of the Fab Five agreed to a five-year deal, which will pay him $2 million in his first year, on Wednesday to lead the Wolverines.
“As a ‘Michigan Man’ I know the place our program has in college basketball and I embrace the chance to build onto that history and lead us to championships both in the Big Ten and national level,” Howard said. “We will continue to develop young men on the court, in the classroom and in the community that our fan base will continue to be proud of.”
Michigan athletic director Warde Manuel, in his first major move in three years in charge of the department, is giving the Miami Heat assistant coach his first shot at being a head coach other than during the NBA’s summer league.
“We have found someone with high integrity, great character and a coach who has unbelievable knowledge of the game of basketball,” Manuel said. “Juwan has proven himself to be a tremendous leader, a wonderful communicator and a developer of talent. We couldn’t have asked for a better role model for the young men in our program. We are excited to welcome back a member of the family to Ann Arbor.”
He replaces John Beilein, who left to coach the Cleveland Cavaliers.
Howard helped Michigan reach the national championship game twice, playing alongside Chris Webber, Jalen Rose, Jimmy King and Ray Jackson. The school later removed the Fab Five’s Final Four banners from Crisler Arena as part of self-imposed sanctions that stemmed from one of the NCAA’s largest financial scandals.
A federal investigation revealed now-deceased booster Ed Martin gave Webber and three non-Fab Five players more than $600,000. The NCAA forced the school to dissociate from the former players involved until 2013. The saga stained the university and basketball program, leading to many years of struggles.
“Juwan wasn’t a part of that,” Jackson told AP in a telephone interview. “He was never involved. And despite being part of the Fab Five, which is tied to Ed Martin, Juwan embodies the professionalism and positivity that Michigan represents across the world.”
Beilein became the leader Michigan needed, running the program without a hint of controversy and bringing the school back to the national title game in 2013 and 2018. The Wolverines also won two Big Ten season championships — accomplishments the Fab Five never achieved — along with a pair of conference tournament titles while becoming the school’s all-time winningest coach.
Although Howard doesn’t have ties to Michigan’s recent history with Beilein, his connection to the school is significant. Howard’s hiring may bring a wave of excitement with endorsements from former teammates such as Webber and Rose along with LeBron James and Dwyane Wade. His coaching experience in the NBA also makes him an attractive coach for top prospects.
Howard had been a candidate to be a head coach in the NBA, including at Cleveland coincidently.
The 46-year-old Howard, who is from Chicago, played at Michigan for three seasons before Washington drafted him No. 5 overall in 1994. The two-time NBA champion with the Heat and one-time All-Star averaged 13.4 points, 6.1 rebounds and 2.2 assists during his career that ended after the 2012-13 season.
Howard went into coaching after retiring as a player, starting as an assistant coach focused on player development with the Heat being promoted to an assistant coach with one of the franchises he played for during his 19-year career.
The Heat had long been bracing for Howard to move up in the coaching ranks. They knew Howard’s longtime goal has been an NBA job, but understood that if Michigan ever called, he would have to take a long look at the opportunity.
“I’m happy for Juwan, Jenine and his family, and feel he is deserving of this opportunity to coach at the University of Michigan,” Heat president Pat Riley said. “He is going back to a school and a conference in which he is revered. I think it is a great step forward for him and the university, and I wish him nothing but the best, because that’s what he’s given us.”
Howard was extremely popular in the Heat locker room as a player — he was a mentor of sorts during Miami’s Big Three era with Wade, James and Chris Bosh — and getting him the long-elusive championship ring was a major motivation source for those teams.
“Juwan is an absolute star as a person, player and coach,” Heat coach Erik Spoelstra said. “I feel he is more than ready. He is a terrific leader and mentor, which translates very well to the collegiate level. While we are losing a valuable member of our staff and a great friend, I am happy for him and his family. He will forever be a champion and part of the Heat family and I am excited to see him take the next step.”
Howard was the first member of the Fab Five to commit to play at Michigan and he later recruited Webber, Rose, King and Jackson to join him.
“He’s the forefather of the Fab Five,” Jacksons aid. “Now, look at his resume: two Final Fours, an Elite Eight and NBA champion. He’s also a great man, who went back to get his degree after being in the NBA and that says a lot about him. He’s always been focused and determined and widely respected.”
___
AP Sports Writers Tim Reynolds and Noah Trister contributed to this report.
___
More AP college basketball: https://apnews.com/Collegebasketball and https://twitter.com/AP_Top25
___
Follow Larry Lage on Twitter at www.twitter.com/larrylage

Rivera: Not a big deal that Newton isn’t throwing yet