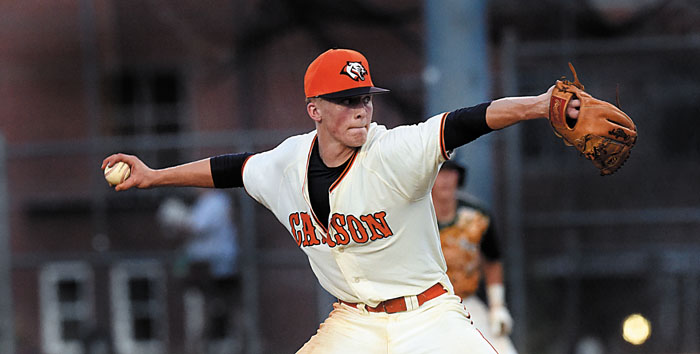 Wayne Hinshaw file /for the Salisbury Post ... Carson pitcher Deacon Wike, shown during a playoff win over A.C. Reynolds earlier this month, gets the ball tonight in Waxaw, as the Cougars try to win the Western Regional series against Marvin Ridge.

CHINA GROVE—  Carson pitcher Deacon Wike’s rise has been one of the more meteoric surges in county history.

From zero varsity wins as a junior to nine wins as a senior.

He’ll probably win some games for Catawba College next spring as a freshman. His signing party with the Indians was held in Carson’s media center on Wednesday, with happy coaches, former coaches, family, classmates and teammates looking on.

“Coach (Chris) Cauble told me before this season started that he was a sleeper to watch,” Catawba head Jim Gantt. “He certainly passes the eye test.”

The basic maturing process has been kind to Wike. Sometimes nature takes over and can’t be denied. Wike’s sister, Karleigh, the former East Rowan star, stands 6-foot-4, and played Division I basketball at the University of Richmond. In the past year, her late-blooming sibling has caught up with her.

The other part of Wike’s transformation wasn’t just something that happened naturally. He put hours in the weight room, adding muscle.

More strength usually leads to more confidence, and self-belief is at least as important as a great curveball.

“Deacon has surprised all of us this year,” Carson slugger Luke Barringer said. “But at the same time, we knew there was a chance this might happen for him. He got in the weight room last fall, he put in the work, and now he’s getting great results.”

Wike (9-1) will get the ball tonight when Carson travels to Waxhaw to play Marvin Ridge in the second game of their Western N.C. Regional championship series. It will be the biggest game of his life, but if he can win it, if Carson (28-2) can finish off a powerful Marvin Ridge club, Wike will be pitching on an even bigger stage in the upcoming 3A state championship series (May 31-June 1).

“We hope Deacon has two more wins left in him.” Cauble said.

Wike started high school at East Rowan. He made progress in two seasons on the East jayvees. He won a couple of jayvee games as a sophomore. Control was his biggest enemy as a sophomore — 15 walks in 24 innings.

He transferred to Carson prior to his junior year. That meant a fresh start, but it didn’t mean overnight success on the field. In just six shaky innings for the Cougars in 2018, he allowed nine hits, seven walks and 10 runs.

“I might have lost some games,” Wike said, with a laugh. “I definitely didn’t win any.”

Wike’s struggles weren’t critical a year ago. Carson had seniors Owen White, Maddux Holshouser and Cameron Prugh shutting down opponents on the way to a 24-6 season.

“The main thing was that while a lot of our guys already knew him, it was still great to see that he fit right into our team,” Cauble said. “Even when he wasn’t pitching that well, he stayed upbeat. He was a great teammate.”

Cauble said more than once that Wike would be really important to the program in 2019 when the pitching staff would have to be rebuilt.

And he has been.

He won his first outing as a senior against Mount Pleasant in early March. After he got to 3-0, Catawba pitching coach Russ Weiker came out to watch his next start.

Wike had won one rough game this season. Pitching on March 29 against East Rowan at Staton Field, he walked the first three hitters, and Cauble made a call to the bullpen.Those three runners scored. That turned out to be Wike’s only loss of the season to this point.

“I was really nervous pitching against East,” Wike said. “My cousins (Trey, Noah and Roby Holmes) played for East. I grew up watching them and wanting to be like them. I looked up to them.”

Wike turned things around after quickly after that brief outing. It didn’t have an carry-over.

On April 23, the Piedmont game at Intimidators Stadium, would prove another important building block in Wike’s rise.

A lot of his games have been breezy, but this one wasn’t.

“I think Piedmont had about eight hits in the first two innings,” Wike said. “They were hitting everything I threw.”

But this time, Cauble didn’t make a call to then pen. He sat back and  let Wike and senior catcher Garrett Alewine figure things out. Wike went the distance and got the win. He showed he could compete — and win — even when he didn’t have his best stuff.

Wike didn’t allow a run in four of his starts against North Piedmont Conference opponents. He’ll take a 1.30 ERA into tonight’s game.

Wike will give up some hits tonight. That’s a given. Marvin Ridge can swing it from 1 through 9 in the lineup and peppered Carson ace Cole Hale for 12 hits  on Tuesday, even though Hales still battled for a 6-3 win. Hales hadn’t allowed more than seven hits in a game all season.  Wike will have to show similar grit. He’s not a strikeout pitcher (59 this season) and will have to rely on Carson’s defense to run down fly balls and maybe turn a double play or two.

Whatever happens tonight, Wike has enjoyed one the greatest senior-year jumps in memory.

“His stats speak for themselves, but he’s also one of the most positive people you’ll ever come across,” Cauble said. “Even when I make him run, he never stops smiling.”