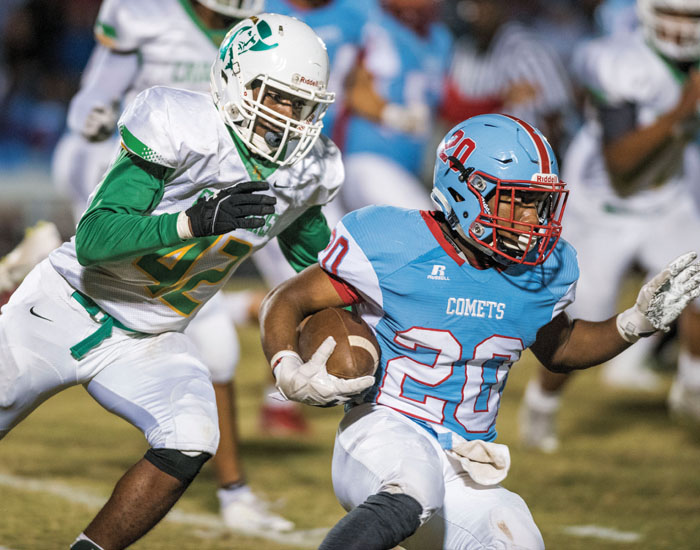 SPENCER — It was probably pure coincidence, but North Rowan defensive standout Tyzai Lyles stood on the back row next to West Rowan quarterback Payne Stolsworth during the 2018 All-Rowan County football photo shoot.

Lyles and Stolsworth will continue to be in close proximity next fall, as they will be teammates at North Carolina Wesleyan College. Stolsworth had to feel a little uncomfortable whenever Lyles was chasing him on the field in high school, but he’ll be glad to have him on his side in the years to come.

North Rowan’s defense was stout last fall, putting up six shutouts in 12 games and holding nine opponents to seven or fewer points. North allowed 13 points in its only playoff game, an effort that should’ve been a good enough effort to win.

Throw out that ugly North Stanly game in which North Rowan self-destructed with early turnovers, and the Cavaliers’ defense allowed five points per game.

The guy who was named team defensive MVP by the coaching staff was Lyles, a linebacker/safety/rover, who did a lot of things right. He was a captain on and off the field. He not only tackled opponents, he led his teammates in every way imaginable.

“He was just huge for our defense,” North head coach Ben Hampton said. “Because he had the ability to play inside or outside.”

North’s base defense was a 4-2-5. On the official depth chart, one of the three safeties was Lyles, but he was still a 6-foot-1, 220-pound linebacker at heart. When North deployed him in a run-stopping role, he frequently created havoc.

“I have good strength, good hitting ability and good size,” Lyles said. “But I think my best asset was watching  and studying film so much. A lot of times, I’d see a formation and I’d know exactly what  play was coming.”

Because he was North’s most versatile defender and one of its most physical, he usually got the most challenging assignments. If the opponent’s best offensive player was a running back, Lyles would become a third linebacker. If the most dangerous opponent was the quarterback or a receiver, Lyles could focus on pass coverage.

“Our coaches tried to get me matched up on their best guy a lot,” Lyles said. “I worked hard at it and always tried to stay on top of it. I wanted to be that go-to-guy that my teammates counted on to make plays.”

Lyles played with a controlled fury, but he didn’t run around as a solo act. He carried out his assignments, stayed in his lanes, even if the play went away from him.

“You have to be a team player,” Lyles said.

Lyles was a consistent tackler in county games as a senior — eight tackles against Carson and Salisbury and seven against West Rowan. He had three tackles for loss in a smackdown of South Stanly and a 40-yard interception return against Lexington.

Lyles has come back from a potentially devastating injury. Adversity made him stronger.

As a varsity sophomore  in 2016, he was injured on Sept. 23,  in the sixth game of the season against West Stokes. While making a tackle, he suffered a lacerated liver.

He came to the sideline, but the severity of the injury wasn’t known right away, so he went back in the game for several plays. By halftime, he was in terrible pain and was laboring to breathe, so he was transported to the hospital. That’s the night his sophomore season ended, but he came back from that scary trauma with a superb, all-county junior year that included more than 100 tackles, three fumble recoveries and a special-teams touchdown.

As an all-county senior, he repeated his work as a sure tackler, while his leadership qualities came to the forefront.

“Coaching up our young guys was very important to me,” Lyles said.

Two  of Lyles’ classmates — Golden Helmet Award winner Nautica Patterson and Cavalier Award winner Benjamin Caldwell — made their college choices, at least in part, so they could be in a large-city environment. Patterson picked Greensboro, while Caldwell is headed to Winston-Salem State.

But Lyles wasn’t looking for the city life. One of the reasons he was attracted to N.C. Wesleyan in Rocky Mount was that the medium-sized city (population 54,000), located about halfway between Raleigh and Greenville, is relatively quiet.

“It has a nice, quiet campus, and I like it quiet,” Lyles said. “I’ll be able to concentrate on football and school.”

The Battling Bishops of N.C. Wesleyan were 5-5 last season, but successfully recruiting players such as Lyles and Stolsworth should help.