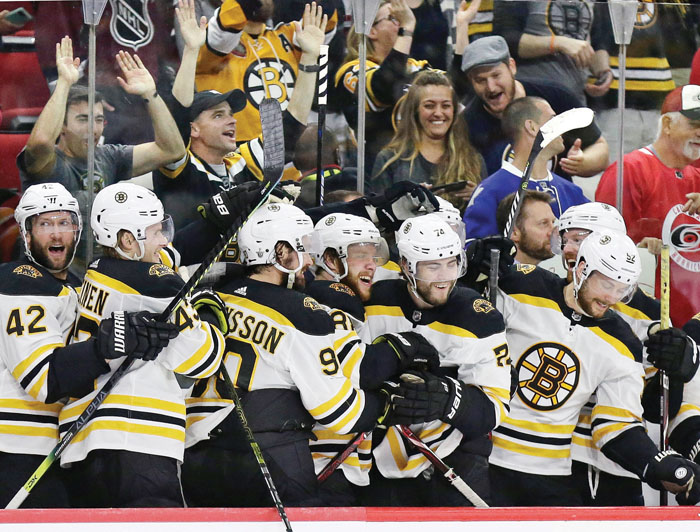 FILE - In this May 16, 2019, file photo, Boston Bruins players celebrate during the closing moments in Game 4 of the team's NHL hockey Stanley Cup Eastern Conference final victory over against the Carolina Hurricanes in Raleigh, N.C. The Bruins will face the St. Louis Blues in Game 1 of the Stanley Cup Final on Monday, May 27, 2019, in Boston. (AP Photo/Gerry Broome, File)

BOSTON (AP) — It’s been more than three months since the last championship parade in Boston, and the city is getting antsy.

Sure, the Red Sox won the World Series last October. And the New England Patriots earned their sixth Super Bowl victory in February.

But since then: Nothing.

And Boston’s sports fans are counting on the Bruins to end the interminable title drought.

“It definitely lights a fire under you to see the other teams in the city bring home their championships,” defenseman Brandon Carlo said as the team prepared to face the St. Louis Blues in the Stanley Cup Final. “We want to be a part of it.”

It wasn’t too long ago that Boston was a sad sack of a sports city, with the Patriots the joke of the NFL and the Red Sox mired in a dynasty of disappointment that would stretch to 86 years. The Celtics won far more than their share, but they endured the longest championship drought in franchise history from 1986-2008.

The Bruins went from Bobby Orr’s two championships in the early 1970s until Zdeno Chara and Patrice Bergeron brought the Cup home in 2011.

If that doesn’t seem like a long time ago, try telling that to the newly spoiled Boston fans who have grown up with the Belichick-and-Brady Patriots and a Red Sox franchise that has won as many championships in the past 15 seasons as it did in the previous 100.

“It feels like there’s been a little bit of a gap in there,” said Carlo, a Coloradan who is 22 years-old, and has only been in the city for three years. “The way things have gone for Boston, we’re looking to be like the other teams.”

And now they have their chance.

The Bruins are at their strongest heading into the Cup final, with a seven-game winning streak that includes a sweep of the Carolina Hurricanes in the Eastern Conference Finals.

Goalie Tuukka Rask has allowed more than two goals just twice in the past 13 games, and he won the last two playoff clinchers with a shutout. Brad Marchand is the leading scorer remaining in the playoffs.

And, with the Celtics done, the Patriots in the offseason and the Red Sox still recovering from their early season championship hangover, the Bruins have the city’s attention.

“We want to be considered the best game in town. Why wouldn’t we?” coach Bruce Cassidy said. “We have some serious competition.”

Cassidy said he has developed a relationship with the other coaches in town, and he reached out to the Patriots for advice on how to handle the long layoff between series. The Celtics practice facility is next door to the Bruins’; on the morning of an NBA playoff game, Cassidy wore a Celtics shirt to his media availability.

When he took the podium for Wednesday’s news conference, Cassidy looked at the unusually large crowd and said, “Red Sox off today?” (They’re on the road.)

The Bruins have also noticed the difference when they’re out and run into fans around town.

“You do see how the city rallies around you,” Bruins forward Jake DeBrusk said. “I grew up in Edmonton, and we only have one sports team. To come in here, and there’s four sports teams and they’re usually pretty good, in the playoffs or in the hunt or winning.”

“It’s very lucky to be playing here,” DeBrusk said. “Ever since I’ve gotten here I fall in love with the city. To see the teams win around here, and how the people supported it, it’s very special.”