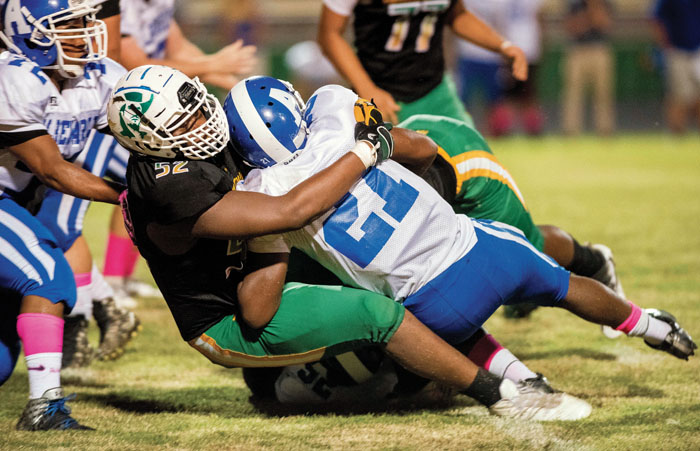 SPENCER — A Winston-Salem State University football coach scouted North Rowan’s game at Carson last September and was impressed by a big guy, No. 52, who played on both lines for the Cavaliers.

North Rowan’s Benjamin “Rhode Island” Caldwell is 6-foot-3 and 270 pounds, but he plays with the motor of a fiery little man. One minute, he’s pancaking people on offense, the next minute, he’s stuffing running backs on defense.

Caldwell will be a preferred walk-on at WSSU in the fall, but it won’t surprise anyone if he’s on scholarship with the Rams by his second year.

“Everything considered, the distance from home, the niceness of the campus, the strong program that Winston-Salem State has, and the affordable cost of going there, this is my best opportunity to continue my education and to play football,” Caldwell said. “I’m proud that I’m getting the opportunity to be a college athlete. I worked hard for it.”

Caldwell was first team all-county as an offensive lineman and made second team on defense. Yadkin Valley Conference coaches voted him all-conference on both sides of the ball.

There’s still some debate about which side of the ball Caldwell will wind up on at WSSU. It’s a plus that he has valuable experience both ways.

If he gets huge in the weight room, blossoms into a 300-pounder, he’ll be on offense. But if he stays in the 260-270 range and gets a bit leaner and quicker, he could be a force on defense. Caldwell just wants to get on the field, but deep down, his preference is defense. Defense lends itself to a special camaraderie. He relishes that feel of being part of a tight unit.

“I really don’t know what’s going to happen,” Caldwell said. “They did recruit me as a defensive linemen, but a lot of my contact has been with their offensive coaches. They’ve broken things down for me. They believe I have the potential to play early in my college career.”

Caldwell was a captain for North. He was a leader, a tireless competitor, a dependable guy. He helped North (9-3) shut out six opponents.

Defensively, he averaged four stops per game and he posted 12 tackles for loss. His best game was probably the night he had eight crunching solo tackles against Albemarle.

Offensively, as North’s left tackle, almost every game was positive for Caldwell. He opened a lot of gaping holes for Malcolm Wilson, the county’s rushing leader.

“We know Caldwell led us in pancake blocks,” North head coach Ben Hampton said. “So many, we lost track of it. Thirty or 40, at least.”

Looking for a fresh start, Caldwell’s family moved to Rowan Country from Rhode Island before his freshman year. That was the source of his unusual nickname.

Exclusively an offensive lineman as a sophomore, Caldwell went back and forth as a junior. Coaches knew they needed him on offense, but his heart was on defense.

With North’s roster numbers down a bit this past season, the Cavaliers had little choice but to make Caldwell a permanent two-way player, and he really came through. It’s tough being a two-way lineman, as there’s a major collision on every play, but he thrived on the challenge. As the year went on, he got tougher and more physical.

“One of the best things about my job is you get to see these guys come in as freshmen kids, and you get to see them leave as seniors and mature young men,” Hampton said. “If you’re really lucky, you get to see a few of them each year move on to play college ball. Caldwell was great for us. He’ll be missed more than I can say.”

Academically, Caldwell has an interest in calculus and physical therapy, but there’s also a chance he’ll be a future coach.

At a party honoring his college decision, he thanked his coaches, his family and his teammates.

“I’ve been fortunate to have the right people in my life helping me along the way,” Caldwell said. “They’ve always gotten me to the right places.”