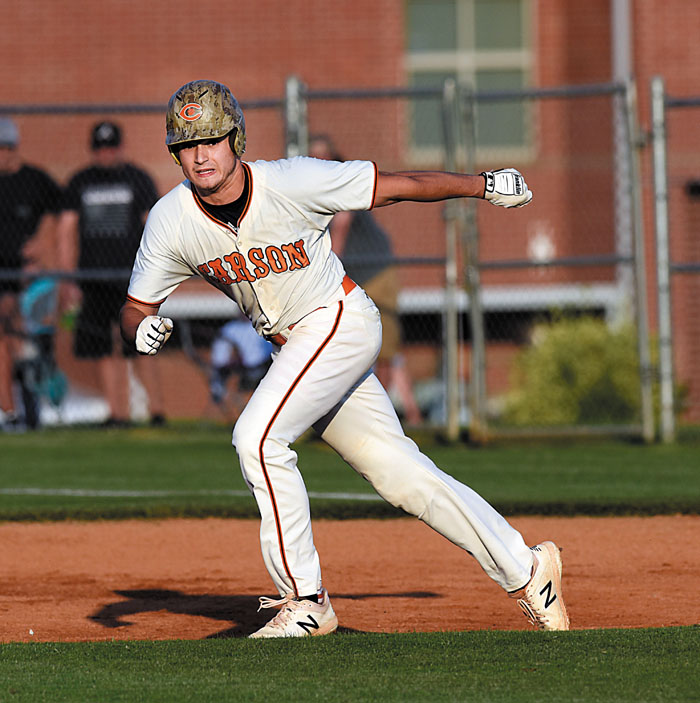 Carson's Luke Barringer goes to second on his double during Friday's 10-0 win over North Gaston. photo by Wayne Hinshaw, for the Salisbury Post

CHINA GROVE — The schools were born a year and 60 miles apart.

Jesse Carson High, established in 2006, has carved out a role in a relatively short period of time as one of the Piedmont’s better baseball programs. Coached by Chris Cauble from the beginning, the Cougars have only missed the 3A state playoffs once.

They won 24 games in 2013, 2014 and 2018. This season they’ve raised the bar to 27, the fifth-highest wins total for a season in Rowan County history, and Rowan is a county that prides itself on strong baseball.

Carson has been a good playoff team, with a lifetime record of 19-11. Carson had never cleared that fourth-round hurdle, but last Friday the Cougars finally broke through, smashing North Gaston, 10-0, to reach the best-of-three regional championship series for the first time. This is the first time Carson has gotten past the one-and-done phase.

As far as the baseball team, well, that’s probably what the Mavericks do best of all. They’ll be at Carson tonight at 7 p.m. for the opening game of the regional championship series.

Marvin Ridge has been seriously good in baseball almost since it opened. All-time in the state playoffs, Marvin Ridge is a fantastic 36-13.

The Mavericks took the 2015 3A championship, beating West Rowan in an amazing fourth-round game along the way. The Mavericks eliminated Carson in 2016 on their way to another state championship.

In 2017, Marvin Ridge battered East Rowan by 10 runs and made it to the regional championship series before losing two in a row to Crest.

In 2018, well, you probably remember what happened in 2018. Carson went to Marvin Ridge in the third round and won behind Owen White, 4-0.

Carson also won at Marvin Ridge in 2010. That was a memorable road trip because it was the first playoff game ever won by Carson’s baseball program.

Mark Mennitt, the feisty coach who guided Marvin Ridge in all of its previous meetings with Cauble and Carson, retired in January. Trey Putnam, promoted to replace Mennitt, has kept things rolling. Marvin Ridge is 24-5.

After knocking out Weddington, Marvin Ridge produced another impressive victory in the third round, beating previously undefeated and second-seeded Crest.

Marvin Ridge boasts a host of college signees and several future signees. Shortstop Matt Duggan, who had two hits against Alexander Central, is headed to Gardner-Webb. Right fielder Henry Jackson will be a Carson-Newman Eagle next season. Catcher Jake Machado, who slugged two doubles in the Crest game, signed with Belmont Abbey. So did lefty pitcher Drew Cognac.

The two horses on the mound for Marvin Ridge in the playoffs have been senior right-hander Tyler Hall, who is headed to Louisburg, and 6-foot-5 junior Kyle McKernan.

Hall pitched the Crest game, while McKernan pitched against Alexander Central, so it’s probably Hall’s turn tonight, with McKernan taking the mound for Game 2 when the series shifts to Marvin Ridge.

Carson’s rotation for the first two games is set in stone, with senior right-hander Cole Hales, a Coker signee, pitching Game 1. Hales is 10-1 with scintillating numbers — a 1.21 ERA and 89 strikeouts.

Hales is batting .337 and has scored 30 runs out of the lead-off spot.

While those two are often the catalysts for Carson’s offense, a lot of other guys are dangerous. Shortstop Zeb Burns (.356), first baseman Logan Rogers (.329) and catcher Garrett Alewine (.323) have produced key hits in tight playoff games. Right fielder Dylan Driver had two hits and scored two runs in Friday’s victory.

Whatever happens tonight, it’s been a historic season for a Carson team that has been more special than anyone — except maybe Cauble — dreamed it could be when official practice started back on Feb. 13.