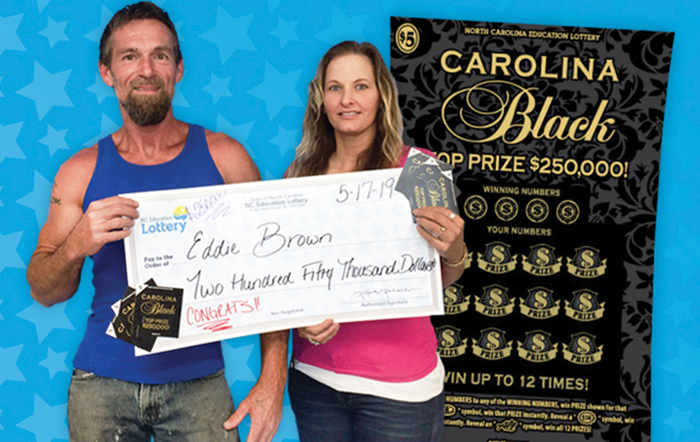 NC Lottery Eddie Brown and his girlfriend, Julie, of Rowan County, pick up his lottery prize.

RALEIGH — A lucky $5 Carolina Black ticket pushed drag racing enthusiast Eddie Brown over the finish line Friday with a $250,000 win. Brown, from Rowan County, plans to use his prize to pursue his hobby of building and racing fast cars.

“I love drag racing,” said Brown. “It’s a hobby I share with my girlfriend. I’m currently building a 1976 Ford Mustang Cobra II for her to race. We named it JULvenile. It’s a lot of fun, just something we like to do together.”

For Brown, owner of the custom building company Finish Touch, the luck began Friday morning when he bought a ticket at the Circle K on East Main Street in Rockwell on his way to work.

“I bought one ticket,” said Brown. “I didn’t see any prizes. I bought another one for later, but figured I’d scan it quick to see if there were any winners.”

The ticket scanner at the store not only said the ticket was a winner, but that Brown needed to go to lottery headquarters to claim his prize. Brown was so excited he immediately drove back home and woke up his girlfriend, Julie.

“You need to scratch this for me,” he said to Julie, “I think I won something big!’”

Julie, co-owner of Donny’s Western Store, scratched the ticket to reveal the top prize of $250,000. The two raced to Raleigh together to claim his prize.

“This feels amazing,” said Brown. “It feels like a double win because I got to share the moment with Julie.”

In honor of the lucky ticket, Brown said he plans to finish JULvenile in a matte black paint.

After required state and federal tax withholdings, Brown took home $176,876. In addition to pursuing his hobby, Brown plans to invest some of the winnings and build a shop.

Ticket sales from games like Carolina Black make it possible for the lottery to raise more than $650 million a year for education. For details on how $7.9 million in lottery funds made a difference in Rowan County last year, visit the “Impact” section of the lottery’s website.