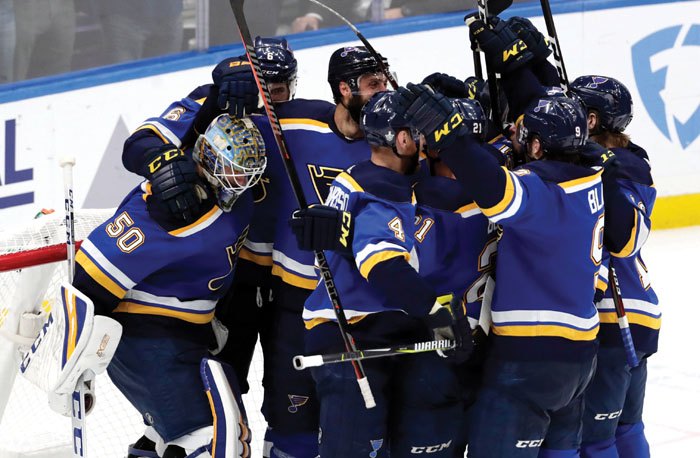 By STEVE OVERBEY Associated Press
ST. LOUIS (AP) — The St. Louis Blues are marching into the Stanley Cup Final for the first time in decades.
Pretty sweet moment for Vladimir Tarasenko and Co.
David Perron had a goal and an assist, Jordan Binnington picked up his franchise-record 12th playoff win and the Blues eliminated the San Jose Sharks with a 5-1 win in Game 6 of the Western Conference final Tuesday night.
Tarasenko, Brayden Schenn and Tyler Bozak also scored for St. Louis, which will face the Boston Bruins for the championship. Ivan Barbashev got an empty-netter with 2:15 left, Ryan O’Reilly had three assists and Binnington stopped 25 shots.
“We always believed we could do this,” said Tarasenko, who had a point in every game of the series. “But it’s still an unbelievable feeling.”
St. Louis won three consecutive games to advance to the franchise’s first Cup Final since 1970. That series also pitted the Blues against the Bruins.
Game 1 is Monday night in Boston.
Laura Branigan’s “Gloria” blared over the speakers at the Blues’ home arena after the latest victory on an improbable run from last in the NHL Jan. 3 to one of the last two teams standing. The turnaround came after Craig Berube replaced Mike Yeo as coach in November and Binnington took over as the starting goaltender in January.
“We always had the talent,” said Doug Armstrong, the general manager and president of hockey operations for the Blues. “But we were finding ways to lose games instead of winning them. They turned it around and just haven’t stopping going.”
Berube gave his team credit for working its way through a coaching change and several months of disappointing play.
“We were trying to get on the right track,” Berube said. “Once we got going in January and February, I knew we had a good hockey team. Once you get into the playoffs anything can happen — and it did.”
Blues defenseman Colton Parayko said it was a matter of confidence.
“We all bought in and eventually we figured out just how good we can be,” he said. “It’s a tight-knit group. But that adversity, it made us work harder for each other.”
San Jose played without injured forwards Joe Pavelski and Tomas Hertl and defenseman Erik Karlsson. Injury attrition played a role for the Sharks, who played seven games in each of the first two rounds.
Dylan Gambrell scored his first career goal for San Jose, which lost for the first time in five elimination games this postseason. Martin Jones made 14 stops.
St. Louis grabbed control with a fast start.
Perron tipped in Sammy Blais’ shot just 92 seconds into the game. Tarasenko made it 2-0 with a well-placed wrist shot at 16:16.
Tarasenko got his eighth goal of the postseason just seven seconds after San Jose forward Barclay Goodrow was sent off for tripping.
Gambrell converted a breakaway along the right wing 6:40 into the second period. Joonas Donskoi set up the play with a long stretch pass.
Gambrell’s goal came just seconds after Jones stopped Pat Maroon from close range. It also stopped the Sharks’ scoring drought at 99 minutes, 32 seconds.
Schenn pushed the lead to 3-1 with a power-play goal 12:47 into the second. He pounced on the rebound of a shot by Alex Pietrangelo for his first goal in 14 games.
Bozak scored on a feed from Perron in the third period for a 4-1 lead.
Binnington improved to 12-7 with his second straight strong effort. He made 21 saves in a 5-0 win in Game 4 on Sunday.
The 25-year-old Binnington stopped Evander Kane on the doorstep midway through the third. He also denied Logan Couture on a breakaway later in the period.
“It’s excitement and relief,” Binnington said. “We put in all the work. It’s pretty special. The final minutes, counting down and how loud it was in the rink, it was a special moment.”
The Sharks took a 2-1 lead in the series, but were outscored 12-2 in losing the final three games.
“I think the two hardest, heaviest teams are in the final,” San Jose coach Peter DeBoer said. “There wasn’t any room out there. And when there was — Binnington made some saves.”
Couture had four of the Sharks’ 26 shots on goal.
“When you lose this opportunity and it gets snatched away from you it’s very hard to take,” Couture said. “You’ve got to get over it.”
Former Blues players Bob Plager, Brett Hull, Chris Pronger and Al MacInnis were in attendance along with numerous other former players. Plager was in tears in the locker room after the win.
NOTES: St. Louis went 0-12 in its three previous Stanley Cup appearances. … The team that scored first won all six games. … Referee Wes McCauley left in the first period with a lower-body injury. He was replaced by alternate Gord Dwyer. … St. Louis D Vince Dunn missed his third consecutive game with an upper-body injury. He took a puck to the mouth in the first period of Game 3. … St. Louis pitcher Adam Wainwright and catcher Yadier Molina attended the game after the Cardinals’ matchup with Kansas City was rained out.
___
More AP NHL: https://apnews.com/NHL and https://twitter.com/AP_Sports