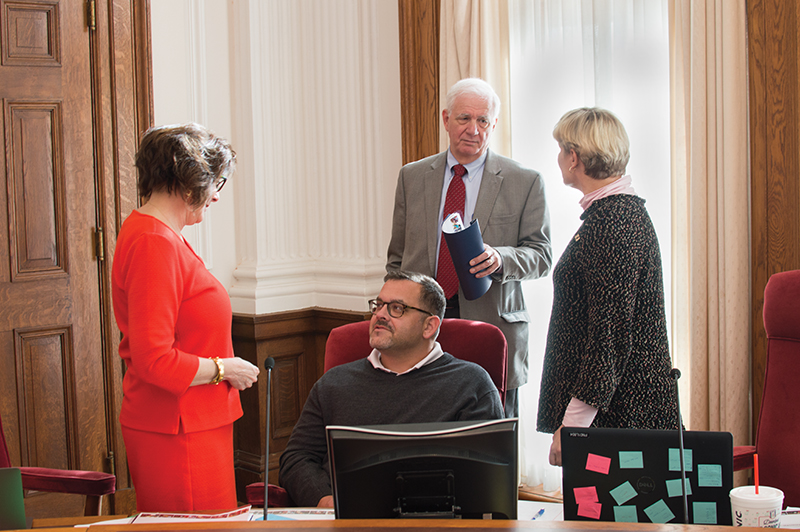 SALISBURY — Rowan County Manager Aaron Church on Monday proposed a budget that aims to chip away at the hundreds of millions of dollars in capital needs for Rowan-Salisbury Schools.

Church proposed a budget that immediately provides $15 million in new debt capacity for RSS and plans for an additional $60 million in capital needs to be funded in the 2021 fiscal year. Figures for upcoming fiscal years, however, do not count $6.5 million allocated in the current year but not yet spent by the school system.

However, all of the money allocated by 2021 — $81.5 million — is less than half of the $226.18 million requested for next fiscal year by Rowan-Salisbury Schools for capital needs.

Still, $81.5 million by 2021 represents a sharp increase from the roughly $60 million on which the Rowan-Salisbury Board of Education based recent school closure plans. The school board paused the proposed closure of Faith and Enochville Elementary schools in early April when the commissioners indicated additional funding would be available after a tax revaluation that, on average, produced higher property values across the county.

Commissioners Chairman Greg Edds said he realizes that the $81.5 million doesn’t take care of all of the RSS needs and said the commissioners would meet with school officials to discuss a 10-year plan for capital funding.

The budget also gives $1 million in debt capacity to Kannapolis City Schools for the 2020 fiscal year, which begins July 1.

‘There are capital needs’

Asked about that choice, Church said there are needs that must be funded.

“The schools have needs. There are capital needs. The cost of construction and doing business has gone up,” Church said. “The county is a consumer just like anybody else.”

Besides schools, Church’s proposed budget includes funding to create a West Branch of the Rowan Public Library at the former Cleveland Elementary School, replacing the county administration building’s roof, replacing the county courthouse roof, renovating a building to be used for probation officers, building a concession stand at Dan Nicholas Park and transferring $1.3 million into a fund to be used for renovations to West End Plaza.

Church warned commissioners on Monday that the services for which money is allocated in his proposed budget are made possible, in part, by an improving economy in Rowan County.

“If we do not continue to grow and increase the tax base, a property tax rate increase will be required,” Church said.

Commissioners did not dig into Church’s budget in detail Monday, instead setting a budget workshop for 1 p.m. June 3 in the Rowan County Administration Building. At 6 p.m. June 3, the commissioners will hold a public hearing on the budget in the same location.

The commissioners must approve a budget before July 1 or create an interim budget if no resolution is reached.

While Church did not discuss it during Monday’s meeting, his budget sets aside $440,000 for the Rowan County Rescue Squad, which has been the subject of reorganization talks after the suspension of Chief Eddie Cress. However, Church’s budget said a meeting would be held this week with the fire chiefs in Rowan County to “work toward a solution that provides rescue services to the citizens of Rowan County.”

The budget proposes adding 13 full-time county employee positions. Included in that total are six income maintenance caseworkers in Social Services, five custodians, one custodian supervisor and one senior election clerk. Novant Health and Atrium have offered to pay the cost of one income maintenance caseworker each, as the positions will be based in the companies’ facilities.

The budget projects a 6.05 percent increase in sales tax revenue, or $1.5 million.

The budget also shows a $374,542 decrease in the the appropriation of the fund balance, which partially functions as a savings account. Church said it’s positive that, even as the county’s budget is increasing, fund-balance appropriations are decreasing.

Church’s budget proposes to purchase 22 new vehicles for county departments — including one for Animal Enforcement, two for Emergency Services, two for Parks and Recreation and 17 for the Rowan County Sheriff’s Office. All that’s at a total cost of $1.14 million. That cost will be financed over three years.