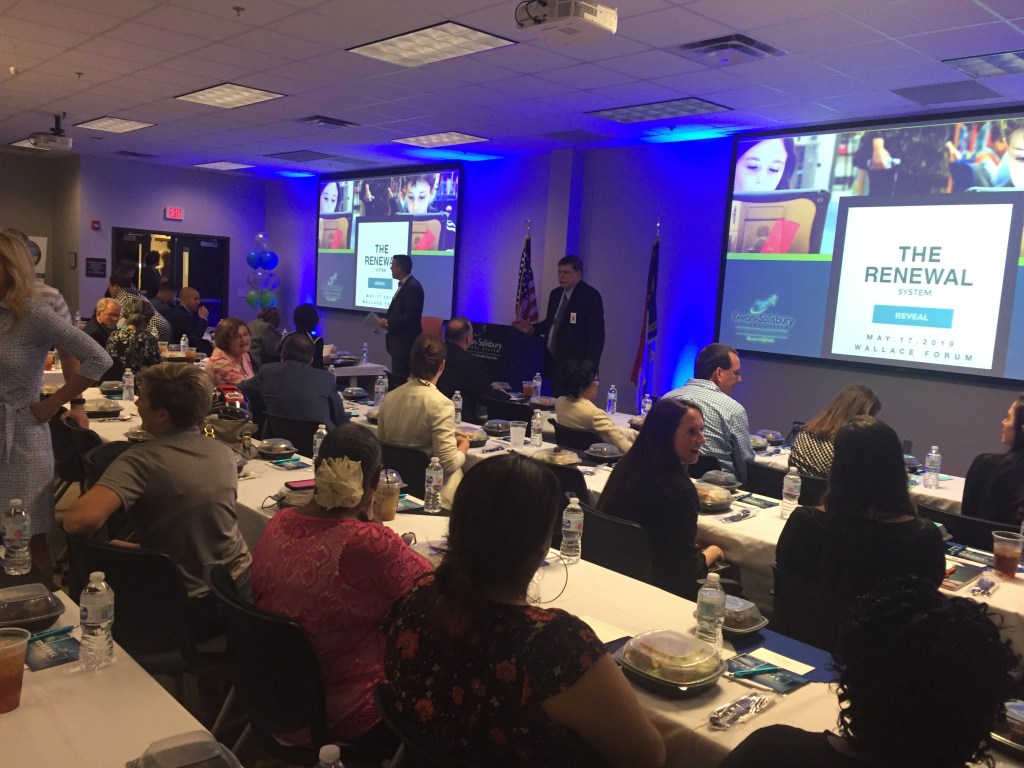 Why? Because “the future of education is happening right here in Rowan-Salisbury,” he said.

“Educators in Salisbury are the pioneers in what will be the education system of tomorrow,” said Johnson, who was one of dozens of people in attendance for the reveal.

“I believe that educators in our classrooms can make better decisions for the students we serve than people in far away places,” she said.

According to Moody, the Rowan-Salisbury Schools System accepted the opportunity to become a renewal district for one simple reason: “We believe our students are more than a test score,” she said.

Moody said that she had long felt that legislation and state mandates in public education, including No Child Left Behind, had “put our eggs all in one basket too far to the left.” Testing, she said, shouldn’t be everything despite its ability to reveal useful information.

Public education had become too driven by tests, an action that had snuffed out the joys of teaching and learning, she said.

To combat this, Moody pointed to a new focus rather than student performance on standardized tests — an emphasis on teaching learners to think, she said.

And so she began to petition legislators for charter-like freedoms at the district level. The dream came true in August following the system’s successful application for the distinction.

Educators and administrative staff across the district immediately went to work exploring the possibilities of this newfound freedom. Each site formed a teacher-led design team, using a needs assessment and a customized 40-page application to generate unique site plans.

With needs identified, teams next went about identifying, researching and exploring best practices to meet these shortfalls. This exploration included “go-and-see” trips funded by community partners such as the Robertson Foundation and Salisbury businessman Greg Alcorn. The trips allowed educators to see innovative, educative practices in person.

Once each school team identified new measures to put into practice, proposed plans were presented to school staff for critique. To date, the school board has given final approval to three, and is set to do the same for 11 more during a May 28 meeting starting at 1 p.m.

As plans were presented, said Moody, system staff became aware of three areas of shared focus. These were crafted into the district’s “Directional System,” a set of three focus areas that each site-specific plan must be working towards.

The academic standards will shift away from complex, intangible and test-driven expectations and into real-world, everyday applications, Moody said.

She pointed to the ability to balance a checkbook, and how failure to do so could wreak havoc on lives, families and marriages.

“If you don’t have fundamental standards, it will be a problem no matter what you do in life,” she said.

Unique life goals meant education would now tap into the dreams, aspirations and individualized goals of Rowan-Salisbury learners, she said.

“When people tap into their unique life goals, great things happen,” said Moody, explaining that children of poverty rarely are given opportunity to express and explore these personal interests.

Finally came interpersonal skills like teamwork, communication and work ethic, items Moody said weren’t on any standardized test and were likely difficult to test for.

“You get a job by knowing academics, but you will keep it by understanding these interpersonal skills,” she said.

District staff is yet working to identify a means of assessing, reporting and making the district accountable for these standards.

Looking onward to next school year, members of three local teacher-led design teams said that the renewal process had been both empowering and rejuvenating.

The process had enabled an open forum for discussion with other teachers who were “fearless and not afraid of innovation,” said Marian Hough, a West Rowan Middle School social studies teacher.

“Sometimes as teachers we get stuck in own four walls,” he said. “This experience has empowered me to know the needs of my whole school, not just my classroom.”

For Alexis Greer, design teacher at North Rowan High School, the coming-together brought life back into her work as an educator. She was now learning alongside students everyday.

“I have been empowered to fail,” she said. “I think being part of a teacher-led design team, being part of this whole renewal environment … we’re seeing that it’s OK to try it and fail. … We may have an ugly baby right now, but it’s going to grow up and be beautiful and it’s going to be great.”

“Giving our children the gift of failure is one of the greatest gifts you can give them,” he said. “As an employer, I’ve seen many entering the job market who haven’t been given that gift. They experience it the first time on my watch. It is very painful. They need to learn to accept that embarrassment, dust themselves off and get back up.”

For Moody, the biggest shift for Rowan-Salisbury Schools through the renewal process has been “taking off the barriers and not blaming Raleigh for our problems.”

“There were a lot of things we could have done, should have done without the flexibility, but we just didn’t know we could do it,” she said.

Now putting these interventions into practice, the superintendent unveiled a document or “guidebook to renewal,” containing draft plans for all schools that were through the initial design process.

The book is available at rssed.org/about/renewal, and outlines which schools are already implementing new flexibilities and which are still in the planning process.

Moody said the book would continue to evolve as more schools finalized their plans and as they began to put these plans into action.

“Even schools labeled as in the implementation process are not perfected,” she said, adding that she didn’t think the book would ever have all 34 schools in full implementation mode. “We’ll make some mistakes on the way and we’re learning.”

She said full renewal implementation would likely take five years. The system was yet nine months in.

“We realize that we’re not what we’re going to be, but we’ll get there with your help,” she said to attendees on Friday, asking attendees to become thought partners and collaborators on the renewal effort.

The system wanted to work with its community to find ways to bring outside learning experiences, she said: apprenticeships, internships, sustainability projects and more.

“We uniquely invited people we thought would tell somebody else what they learned today,” she said. “People in this room are the biggest cheerleaders for what we’ve been trying to do.”

For state superintendent Johnson, next steps involve continuing to watch, learn from and evaluate the success of Rowan’s new methods.

He said the renewal model had the potential to be an amazing opportunity, not just for Rowan-Salisbury, but for all of North Carolina.

“We know that we have an education system that was designed 100 years ago,” he said. “It was with the best tools we had at the time, but all the rules that come from Raleigh are all built up around an outdated model. We know we can’t keep doing more of the same and expect different results.”