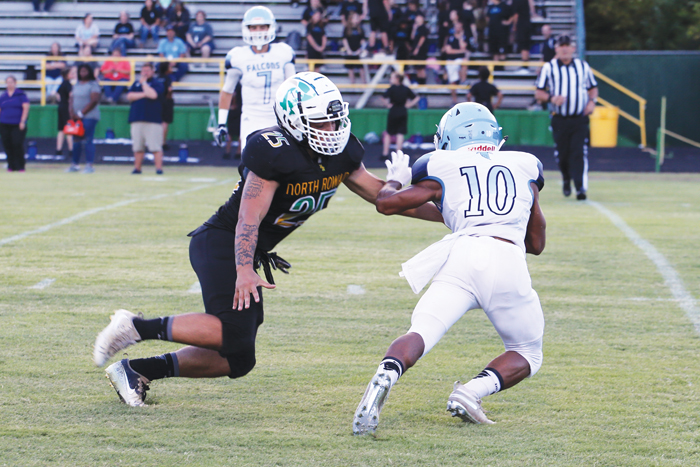 SPENCER — Appropriately enough, a clock told North Rowan linebacker Nautica Patterson that it was time to commit to the Greensboro College Pride.

“From the Greensboro practice field, you can see this clock downtown, so you always know what time it is,” Patterson said. “It was cool being able to see the clock. That clock is reminding you that the school is right in the middle of a big city with tall buildings. I like the city life. The city is a big reason I chose Greensboro.”

The Pride, which competes at the Division III level, is fortunate to land Patterson, who was one of the honorees at a signing party in the school media room on Thursday. Patterson, who got started in football as a third-grader with the Salisbury 49ers, recently was named North Rowan’s male athlete of the year.

Patterson’s final act in a North uniform was throwing the shot put in Greensboro in Saturday’s 1A Track and Field Championships, finishing ninth in the event at North Carolina A&T. He was the North track team’s MVP.

During the winter months, he was Yadkin Valley Conference wrestling champion at 182 pounds.

Back in the fall, he was voted YVC Defensive Player of the Year in a football league that included some major studs from North Stanly.

He also was North’s Golden Helmet Award winner. That’s a lot of hardware.

“He was a captain, not only one of our best players, but one of our best leaders on and off the field,” North head coach Ben Hampton said. “It’s tough to lose him and impossible to replace him. He  made so many tackles and he called everything for our defense. He and Tyzai (Lyles) got the guys in the right spots.”

Patterson is fast, fearless, smart and strong. Those attributes help him compensate for being on the small side for a linebacker at 5-foot-9, 205 pounds.

Greensboro was 1-9 last season, but that doesn’t discourage Patterson at all. One way to look at 1-9 is that there’s going to be an opportunity to play early. Patterson could be on the field as a coverage guy on special teams as a freshman. No one gets down the field on a kickoff quite like he does.

“I looked at different schools, but Greensboro was the best fit for me in a lot of ways,” Patterson said. “They build you up health-wise, strength-wise and academically. You run two miles to get to the weight room every day. That’s not a bad thing. That’s an opportunity for some great conditioning.”

Patterson has good feel for life and a good grasp of the big picture for a teenager.

Ask him about his favorite senior memory and it’s not a big hit or even one of North’s nine wins.

“Definitely it was reading to kids and helping elementary school kids with their reading,” Patterson said.

He wants to stay in athletics after his playing career is over. He’ll probably major in sports management.