College baseball: Link leads Indians to the next step 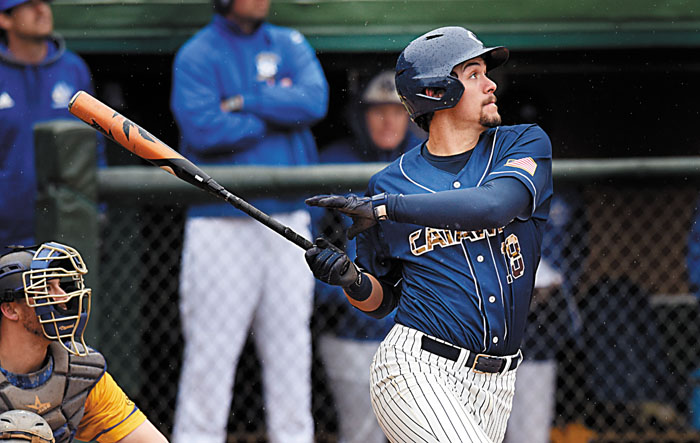 Catawba's Hunter Shepherd, shown in a file photo, went 4-for-4 on Saturday, as the Indians defeated Young Harris, 7-5, in the NCAA Southeast Regional at Newberry, S.C. ... File photo by Wayne Hinshaw/for the Salisbury Post

NEWBERRY, S.C. — Caleb Link was mostly a light-hitting outfielder in his days at West Rowan High and his role for the Rowan County American Legion team was frequently as a pinch-runner because of his speed.

Link didn’t pitch a lot in high school or Legion because there were numerous talented people in front of him, but Catawba College/Rowan Legion coach Jim Gantt liked what he saw on those occasions when Link got on the mound. His pitches had movement — late-breaking, crazy movement.

A lot of people were surprised when Gantt gave Link, who is now a junior, a chance at Catawba, but he’s made the most of it. He’s earned a job. He’s pitched in 19 games this season, carving out an important important role in the bullpen.

On Saturday in the Southeast Regional, Link enjoyed his finest hour. He was the main reason Catawba beat Young Harris 7-5 to advance to the “Super Regional” in the new D-II format.

Catawba starter Sawyer Strickland was knocked out in the fourth inning. Young Harris scored five times in the fourth, including a two-run homer by 6-foot-5 masher Zavier Lushington.

Link got the call to replace Strickland. Most thought it was just to try to get Catawba through that potentially disastrous fourth, but Link had bigger plans. He stayed around for a while.

By the time Link exited the mound in the eighth inning, the game had turned completely. Catawba had the lead. When Riley Myers replaced Link, there was a standing ovation for an unlikely hero as he walked off the mound. This was the game of Link’s life.

Link had gotten 11 outs, allowing two hits and no runs. His last pitch got Lushington out on a pop up.

Myers immediately allowed a single, but when he got a double-play grounder to preserve a 6-5 lead, Catawba was headed to victory.

Offensively, Catawba trailed 5-0 when it came to bat in the bottom of the fourth, but the Indians (45-12) were able to piece together a long rally.

Jackson Raper’s single put the Indians on the board. Cameron Morrison and Lee Poteat got runs home from third base with productive outs, and it was 5-3. Catawba picked up a fourth run in the inning when Heath Mitchem walked with the bases loaded.

Catawba took the lead in the fifth. Shepherd, who went 4-for-4, started the inning with a double to the base of the fence. Butts singled to right, and when the ball rolled under Lushington’s glove, Shepherd easily scored to tie the game. Butts hustled all the way to third and scored the go-ahead run from there on Raper’s sac fly.

Catawba added an insurance run in the eighth on an RBI single by Simpson.

Peyton Williams pitched the ninth for the Indians, struck out two and nailed down his 11th save.

Catawba, seeded third in the regional, advances to a best-of-three series at top-seeded North Greenville. That series will be played in Greenville on May 24-25.