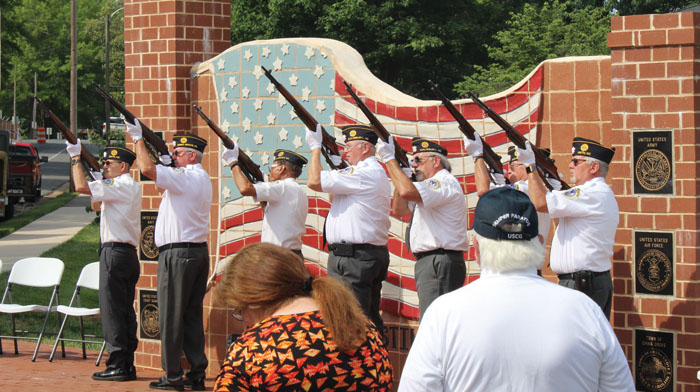 CHINA GROVE — China Grove memorialized its local war heroes and veterans Friday through a dedication of the town’s new memorial.

“When I was looking at those bricks earlier,” said keynote guest speaker Joseph Vaughn, “I was amazed at the cross-section how many theaters of war that were represented in those bricks.”

The ceremony was held at the China Grove Community Center, where the town’s new, brick veterans memorial sits. It was a project initiated and finished over the previous year, said Town Manager Ken Deal. Bricks at the memorial can be purchased for $50.

Vaughn is also director of the Salisbury VA Medical Center and served from 1983-93 in the Navy as a fire controlman.

“A veteran,” Vaughn went on, “is an ordinary person that got asked to do extraordinary things while they were in the service.”

Veterans, coming from many different backgrounds, “served for one unified purpose,” Vaughn said. They served “to make sure that our way of life that was given to us over 200 years ago by veterans stays the way it is now,” he said.

“Every veteran has said that they will do everything they can for their country — up to and including giving their life,” Vaughn said.

Notably, Vaughn added that veterans endure scars that people cannot always see, remembering a reunion for Afghan veterans he attended. “For those veterans, we need to offer a sympathetic ear,” he said.

Seventy-five percent of veterans who commit suicide are not in the VA system, he said.

We need to be there when they are reaching out, he said.

Ford tipped his hat to the efforts by China Grove to commemorate their veterans in the memorials — saying he was glad to see more memorials like this one pop up.

But, the appreciation military personnel received Friday wasn’t always the case, said Stroud, who also served in the military from 1970-74.

Stroud remembered the time around the Vietnam War — when veterans returning from battle faced disrespect. It is nice to see that they are getting recognized here today, he said.

Asked about the speeches, Army veteran “Wild” Bill Corriher said they were “superior.” Corriher served as a driver or “motor pool” stateside in the Korean War.

Today’s improved respect for veterans “means a lot,” he said.

“A lot of people paid their life so we can walk free,” he said.

Friday’s dedication also included the presentation of a flag to the town of China Grove and its veterans by Tucker Osborne, a spokesperson from Congressman Hudson’s office.

The dedication featured a Freightliner truck with a wrap around the cab that commemorated veterans. The specific truck is called “Ride of Honor.”