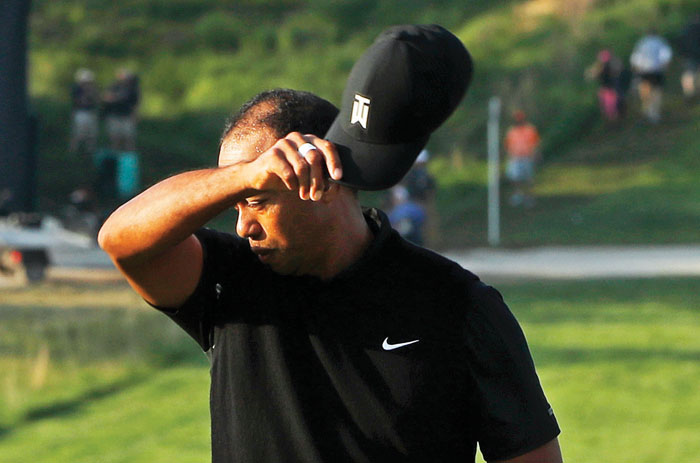 Tiger Woods removes his hat after finishing the second round of the PGA Championship golf tournament, Friday, May 17, 2019, at Bethpage Black in Farmingdale, N.Y. (AP Photo/Andres Kudacki)

By JIMMY GOLEN AP Sports Writer
FARMINGDALE, N.Y. (AP) — Tiger Woods gave a hop with his left leg and prepared to pump his fist as his birdie putt rolled toward the 17th hole in the PGA Championship on Friday.
Then the ball kept on rolling.
Down came his leg. A groan rose from the crowd. And Woods was all but done for the week.
The Masters champion shot a 3-over 73 at Bethpage Black in the second round to finish at 5 over for 36 holes and miss the cut by one stroke. It’s the first time Woods has missed the cut at a major in the same year he won a major since 2006.
“You know,” he told reporters afterward, “I’m the Masters champion and 43 years old and that’s a pretty good accomplishment.”
Woods said he had not been feeling well since winning at Augusta National last month — his 15th major tournament victory, but his first since 2008. So he decided to rest to get ready for the PGA, which moved up on the calendar to May this year for the first time since 1949.
“It’s a nice problem to have,” Woods said. “I’ve enjoyed being the Masters champion again, and the PGA was a quick turnaround, and unfortunately I just didn’t play well. As I said, I didn’t do all the little things I need to do correctly to post good scores and put myself in position to shoot good scores.”
Asked if he might have benefited from playing more between the majors, Woods alluded to an illness that kept him from competing.
“Just don’t feel well and just not able to do it,” he said. “Thought resting would be better, so I would have energy to play.”
But he needed more than energy to make it to the weekend on the punishing par-70, 7,459-yard course. After shooting a 72 in the opening round — already nine strokes off the lead — he hit just three fairways on Friday, his fewest at a PGA since the final round in 2010.
It started on his very first hole, when he sent his drive into the gallery far to the left of the fairway, causing fans to part and clear a path for his approach to the green. He went into the greenside bunker but got up-and-down from about 5 feet to save par.
He wasn’t so lucky on the second, when he went into the rough on the right and took the safe way out by chipping onto the fairway. The bogey put him at 3 over and flirting with the cut line for the first time.
He found some safety with an 18-foot putt for birdie on the sixth hole, then gave it right back with a three-putt from 6 feet on the seventh. A birdie on No. 9 — thanks to a 39-foot putt — gave him another chance to make the weekend.
Then came three straight bogeys to start the back nine, followed by a birdie that left him at 4 over. The projected cut line moved to 4 over while he was standing on the 14th green, but he missed a 12-foot par putt and fell to 5 under, then failed to make up any ground on the way in.
After putting out on No. 18, he shook hands with playing partner Brooks Koepka, who was 5 under on Friday and 12 under for 36 holes. The defending champion will take a seven-stroke lead into the weekend as he tries to win his fourth major in two years, but the fans below chanted “Tiger!” as the players walked across the bridge to the clubhouse.
Those with tickets to the third and fourth round won’t get a chance to cheer for him.
Woods will try again for his 16th major victory at the U.S. Open at Pebble Beach in June. The British Open is a month later at Royal Portrush.
He turns 44 in December.
“There’s no reason why I can’t get up to speed again and crank it back up,” Woods said. “I’ve got to start feeling a little bit better first before that happens. We’ll do that first and then start cranking it back up again.”
___
More AP golf: https://apnews.com/apf-Golf and https://twitter.com/AP_Sports